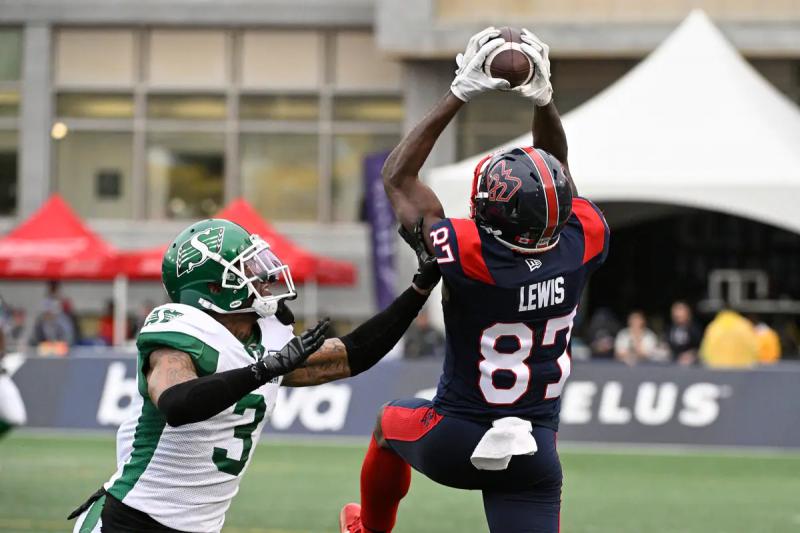 With 307 yards in three games, Montreal Alouettes wide receiver Eugene Lewis heads into Saturday's game against the Roughriders in Saskatchewan as he dominates this stat column within the Canadian Football League.

With a second meeting in as many weeks against the Roughriders, Lewis will again be closely watched by the opposition and, this time, by the hostile crowd at Mosaic Stadium in Regina.

“My first objective is always to win the Gray Cup, but personally, I just want to be the best receiver of passes in this league, indicated Lewis, bluntly, during an interview granted to the QMI Agency. I think I am and I want to lead the league in yards, touchdowns and everything else. That's what I impose on myself, I have to make plays when I have opportunities and I have to be successful to help my team.”

Despite the performances of the Pennsylvania native, the Alouettes suffered heartbreaking losses at the start of the season, so they maintain a 1-2 record. Their only victory was thus obtained against the Roughriders (2-1), Thursday, June 23 in Montreal, by the score of 37 to 13. During this game, Lewis had caught four assists in five attempts for a total of 68 yards.

Aged 29, Lewis is logically one of the players who suggest that the Montreal team could have a successful campaign.

“I have seen Geno grow since I arrived here in 2018 and it is absolutely fantastic,” boasted head coach Khari Jones. He has evolved not only as a football player, but he is now taking on a leadership role in the team. He's definitely one of the best receivers in the league and he's also, on top of that, a good person.”

“If a play doesn't work because of a bad pass, he's the one who says he should have made the catch for me,” quarterback Trevor Harris corroborates. It shows the type of guy he is. He constantly wants to improve and elevate his game. He plays the ball well in the air, probably better than anyone I've played with. I just have to throw over his head and he makes the plays.”

“He knows he may not have reached his full potential yet and he continues to work tirelessly on his development. He's one of the best receivers in the CHL, there's no doubt about that,” said the veteran.

Jones admits to being continually amazed by Lewis who, in 2021, had completed the season with 964 yards in just 13 games.

“There aren't many things that surprise me with him anymore,” the coach said. He has such control over his body and can do a lot of things after getting the ball, like those little moves to avoid tackles. It's fun to lead him.”

The importance of a balanced offense

Referring to the team concept, the receiver of passing Eugene Lewis notes the need for the Alouettes to maintain a diversified offense in order to be successful. He thus diverts the spotlight to the running game on the sidelines of Saturday's game against the Roughriders in Saskatchewan.

“Despite the importance of [William] Stanback for this team, we must give credit to Jeshrun [Antwi] for his way of making up for this loss, he argued, recalling that the Alouettes' main running back is on the floor for at least another month. In football, you have to maintain the balance on offense as well as possible. If you throw too much or if you run too much with the ball, the defense will adjust with precise formations. It’s hugely important to keep a balance.”

“In my opinion, all teams that win championships are well balanced, observed in turn quarterback Trevor Harris. There are very few exceptions, whether at the university or professional level. We have the guys in place for that, including good players on the offensive line. We have no excuse not to run the ball and sometimes doing that also helps put the defense on their toes and get [the quarterback] more time in the pocket.”