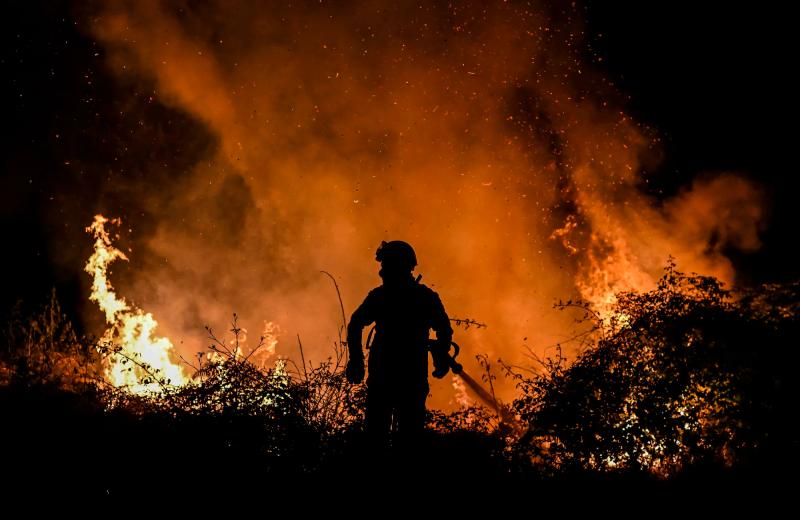 Part of Western Europe continued to swelter on Saturday under a heatwave that has caused devastating wildfires and which forecasters predict could shatter several temperature records early next week .

In the south-west of France, the mobilization of firefighters did not weaken on Saturday to fix the fires, and particularly in Gironde, where nearly 9,000 hectares of forest left in smoke since Tuesday, in a context of generalized heat wave where temperatures could reach 40°C locally, according to Météo-France.

In the town of Teste-de-Buch, the efforts made have slowed the progression of the fire. “We are still, and it is a satisfaction, at 3150 hectares burned, but the fire is still not under control”, declared to the press the sub-prefect of Arcachon Ronan Léaustic, who greeted the “enormous intensity and mobilization” of the firefighters in the night “to preserve this perimeter”.

Recoveries have taken place in recent hours on the side of the beaches of the Lagoon and Petit-Nice to the south of the very touristy dune Pilat, said the mayor of Teste-de-Buch, Patrick Davet

These fires, which mobilize a thousand firefighters, have since Tuesday led to the evacuation of 10,000 people.

Portugal was experiencing a relative calm, with only one major fire still active on Saturday, in the north of the country , between the municipalities of Baião and Amarante.

In the middle of the day, the fire progressed there at least on one front, on the side of a wooded hill in this hilly region located upstream of the Douro River, found AFP journalists.

The day before, a water bomber plane which was fighting a forest fire in the region of Guarda (north) crashed, causing the death of the pilot, its sole occupant.

According to a report from the Portuguese civil protection, the fires of the past week have caused two deaths and around sixty injuries. According to his estimates, these fires have ravaged, since the start of the heat wave, between 12,000 and 15,000 hectares of forest and brush.

In Spain, dozens of fires were still raging from north to south of the country. In the region of Extremadura, bordering Portugal, an outbreak of “unfavorable development”, according to the regional government, led to the closure of a section of the A5 motorway on Saturday morning, linking Madrid to the Portuguese border. .

At the same time, in the far south of Andalusia, a fire near Malaga forced the preventive evacuation of more than 3,000 people, according to the Andalusian emergency services.

In Greece, firefighters continued to fight an outbreak that broke out on Friday morning, prompting the preventive evacuation of seven villages in a rural area of ​​the prefecture of Rethymno, on the island of Crete.

The Spanish Meteorological Agency kept virtually the entire country under different high temperature alert levels on Saturday, with values ​​above 40°C in many areas and up to 44°C in places.

In Portugal, only the southern Algarve region was not on heat alert. In the rest of the country, the Meteorological Institute predicts temperatures that could reach 42°C in places on Saturday.

If the peak of this heat wave seems to have been crossed in the Iberian Peninsula, the mercury does not should drop below 40°C only at the beginning of next week.

Further north in Europe, in the UK, a crisis committee made up of British government ministers was due to meet on Saturday after the national weather agency issued the first-ever 'red' alert for extreme heat , warning of a 'risk to life'.

The Met Office said temperatures in southern England could top 40C for the first time on Monday or Tuesday, thus beating the record of 38.7°C dating from 2019.

The Mayor of London, Sadiq Khan, has advised Londoners to use public transport on these days only in case of “absolute necessity”. Rail companies have also urged passengers to avoid travelling.

Some schools in the south of England have told parents they will remain closed during the heatwave early next week.