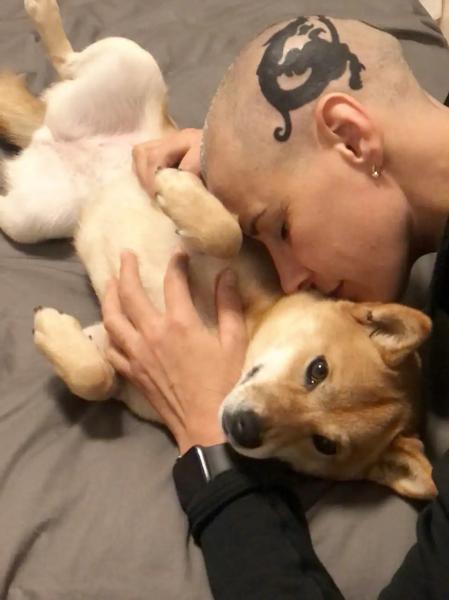 Lychee is a female shiba inu just over four and a half years old.

What was your reason for getting this dog? at your place?

In fact, it's my girlfriend's dog who, by default, has become mine. When I met my girlfriend, I had a female schnauzer who died a few months after we met. So I became his “step mom”, his stepmother!

Why did you choose the name Lychee?

It's my girlfriend who named it that. I think it suits her really well: it's a sweet little fruit, just like her!

I always had animals at home when I was young. I would say I'm more of a dog, because I grew up with them.

How can you describe Lychee's personality in a few sentences?

Lychee is very independent. For example, when we arrive home, she doesn't even raise her head. She is not clingy or really affectionate. Not easy for me who am rather emotionally dependent! (Laughter) I run after Lychee sometimes saying, “Love me! She is also very anxious. She sometimes has panic attacks because of certain noises (sharp cries, thunder, oven alarm, etc.). So she is shaking and panting hard. I changed my habits a bit and I make less noise for his comfort. Lychee is also a great player! She has a funny canine language like all shiba inus. A little mixed, I would say. For example, when she wants to play, she slaps herself in the face with her hind legs.

Tell us a particular fact about Lychee.

She sings! When she wants something, she sits down and sings.

Tell us a funny fact about your dog.

If we give him a os (a “nonos”), she goes screaming into the house. She's screaming like she's been strangled! We have good videos of that on his Instagram site (LycheeLemieux).

Tell us about one of her bad tricks.

She's great and hasn't really done any bad tricks. At worst, sometimes when we're playing and she gets really excited, she plays a little rough and she bites.

Where is her favorite place?

She has no routine or particular corner except the kitchen. She lies down on the floor, in the middle of the kitchen, and she sleeps.

What are her favorite activities?

Play and walk outside in winter. In the summer, she is very hot and finds it difficult. She has such a dense and thick coat.

Who takes care of your pet when you go on vacation or for work?

She comes often with us, because she travels well by car. She's super chill and loves socializing and driving. Otherwise, Steve, our best friend, has a golden retriever named Jessie that Lychee adores. This is his best! You can't pronounce his name otherwise Lychee gets excited. We have established a calendar this summer and we “share” the dogs. Steve keeps Lychee and we return the favor in turn. We love when Jessie comes here. She's more sticky and we like that!

How can your animal be a source of inspiration for you?

I draw a lot and I drew Lychee several times. She is pleasant to draw.

♦ Internationally renowned model and muse of Jean-Paul Gaultier, Ève Salvail was in Paris during the last Fashion Week.

♦ Animator, you can see her in the show Dompter son dragon on the Vrai platform.

♦ Author, she wrote Be you and you're beautiful, an autobiography for Éditions of Man.