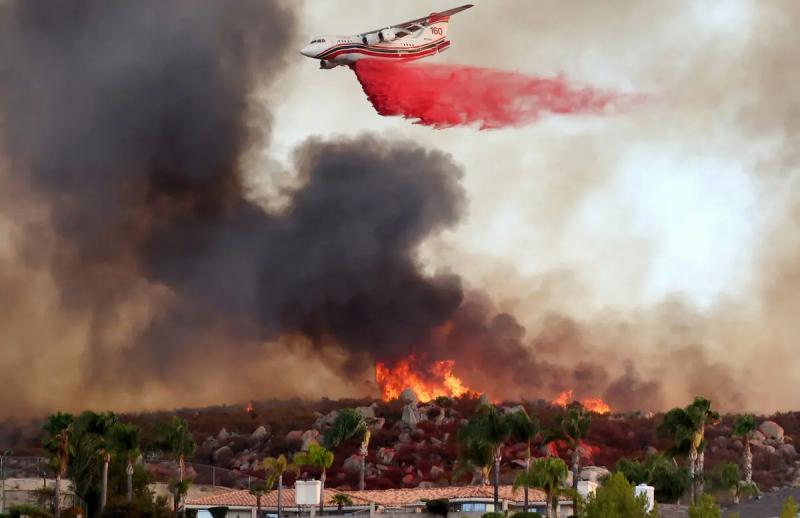 Global warming above 1.5°C, the most ambitious goal of the Paris Agreement, could trigger several climate “tipping points” that would trigger catastrophic chain reactions, according to a study published Thursday in the journal Science.

And current temperatures, already rising, threaten to trigger five of these tipping points, including those concerning the ice caps of Antarctica and Greenland, warn the authors of the study, who believe, however, that it is not too late to act .

“For me, it will change the face of the world – literally, if you look at it from space”, with the rise in the level of the oceans or the destruction of the forests, explained to AFP Tim Lenton, one of the main authors of the study.

He signed the first major publication on this subject in 2008.

A “tipping point” is “a critical threshold beyond which a system reorganizes, often brutally and/or irreversibly”, according to the definition of the UN Panel of Climate Experts (IPCC). These are phenomena that independently and ineluctably trigger other cascading consequences.

While initial analyzes estimated their triggering threshold in a range of 3 to 5°C of warming, progress in the observations and climate models, as well as in the reconstruction of past climates, have drastically lowered this assessment.

The study published in Scienceis a synthesis of more than 200 scientific publications, conducted in order to better predict the thresholds for triggering these breaking points.

The authors identify nine major “tipping points” at the planetary level and seven at the regional level , 16 in total.

Among these, five could be triggered by current temperatures, which have risen by almost 1.2°C on average since the pre-industrial era: that concerning the ice caps in Antarctica and Greenland, a sudden thaw of the permafrost, the halting of a heat transfer phenomenon in the Labrador Sea and the extinction of coral reefs.

With a warming of 1.5°C, four other points drop from the “possible” category to “probable,” and five more then become “possible,” according to the study.

For the ice caps of West Antarctica and Greenland, crossing the breaking point estimated by scientists would participate, over hundreds of years, in a rise in sea level of 10 meters, details Tim Lenton, of the British University of Exeter.

If the destruction of coral reefs has already begun, rising temperatures could make this destruction permanent, and thus affect the 500 million humans who depend on it.

In the Labrador Sea, a phenomenon of heat exchange (or convection) that brings warm air to Europe could be disrupted, resulting in colder winters, as the continent experienced during the Little Ice Age.

With a warming of 1.5°C, a major ocean current in the Atlantic (the AMOC) would be disrupted and at 2°C, this would be the case for the monsoons in West Africa and the Sahel and the forest. Amazonian which could then turn into savannah.

These devastating effects depend on the duration of the warming, explains the lead author of the study, David Armstrong McKay: if the 1.5 ° C settles for 50 or 60 years, the planet will have to face the worst consequences.

But these “tipping points” will do very little to worsen the warming itself, he adds, estimating that the humanity can still limit the damage for the future. “It's always worth reducing our emissions as quickly as possible”, pleads the scientist.

Tim Lenton, one of the world's experts on the subject, wants to believe that this concept of rupture can be translated into a more positive in the fight against the climate crisis, as a “sociological tipping point” that encourages action.

“It's how I manage to get up in the morning”, explains he. “Can we change, transform our lifestyles? Thinking systemically, with this idea of ​​a breaking point, gives us a glimmer of hope.”