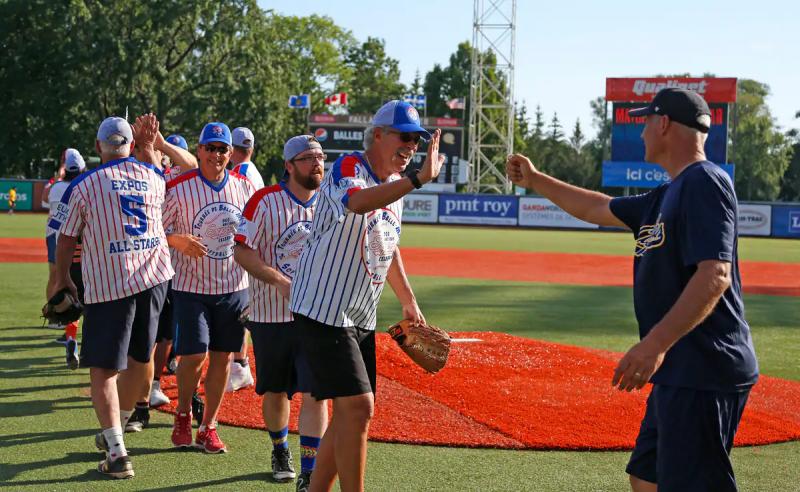 The visit of the Expos Fest tour to Quebec City on Saturday was filled with nostalgia during the game of the Montreal Expos alumni against the Capitals alumni at the Canac stadium. Many of them had stars in their eyes for this meeting.

Caps players, for the most part, began to take an interest in baseball by watching the Expos . They reunited with their former teammates for a day, with the chance to face their idols. Let's just say we've seen worse day!

“It is a ritual that we have every year, in collaboration with the Capitals. We bring them back for reunions and it's always for good causes,” explained the alumni manager, Stéphane Dionne, on the phone.

“With the guys, we talk on Messenger and they were excited like children. These are really kids going home,” he added, the pleasure showing in his voice.

Everyone was treated to a good show despite the grueling heat. About a thousand fans had come to see this game before the game between the Capitales and the Aigles de Trois-Rivières, in the Frontier League.

It was close, the former Expos winning 9 to 8. Vance Law started the encounter on the mound replacing the legendary Claude Raymond, and it was the inimitable Bill “Spaceman” Lee who made the save. In this softball game, the septuagenarian threw rapids and curves over the shoulder to close the books.

“It was magic,” Dionne admitted.

“Win or lose, we all won in this. At least we had a game. It was like a gang of kids in the alley, like when we were young”, illustrated with nostalgia the 52-year-old man.

The Expos Fest allows you to reconnect with the pleasure of playing baseball, but it is also a great initiative to raise funds. The Kat D DIPG Foundation, which fights childhood brain cancer, is approaching $1 million in donations.

That says a lot for everyone involved in the tour.

“We are all parents of children, and children are the apple of our eyes”, recognized Stéphane Dionne.

“We always do it for the cause , and when the cause is the kids, it's always [important], said former Expos pitcher Denis Boucher. I had four and my daughter works at the children's hospital. It's always a no brainer to participate in this and, at the same time, we have fun doing what we love, playing baseball and seeing our former teammates again.