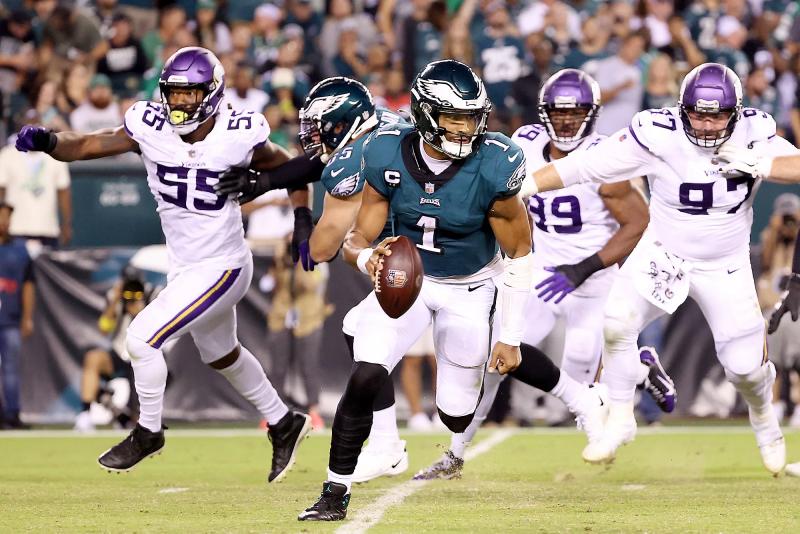 Sometimes in the NFL, there are these decisions that completely upend perceptions around a team. Like when the Eagles surprised everyone by making quarterback Jalen Hurts their 2020 second-round pick.

After a strong start to the season this fall, the Eagles seem to be taking their place among the teams to watch in the National Conference. Impossible to say with certainty after two weeks of activity, but several promising signs are there, starting with the spectacular game of their young pivot.

Still, in 2019, the Eagles were having a disappointing second season in a row. Many predicted a long reconstruction movement. The miserable campaign of 4-11-1 in 2020 seemed to confirm that the organization was starting on a whole new basis and that it would take patience.

The Eagles then opted for Hurts, against all odds. They had just, a few months earlier, conceded a huge four-year contract for 128 million to Carson Wentz, just to cement his status as a franchise quarterback.

Wentz's game quickly declined and his leadership skills were challenged. Behind the scenes, the young Hurts was busy and on the contrary, forging strong relationships. He quickly gained admirers throughout the organization, so much so that the Eagles passed on Wentz to the Colts, who then sent him to Washington.

Hurts has only 21 starts in career and it would be too early to say that the team has found its man of confidence for the next 15 years.

His spectacular start to the season, however, puts him third among the favorites for the most valuable player award, according to the bookmakers. His progress seems very real and last year, the Eagles caused a surprise by taking part in the playoffs. A few months later, they are already favorites to win the title in the Eastern Division.

Just a year ago, the Eagles seemed to be heading into the wall with heavy contracts and without a franchise quarterback. They were desperately needed at receiver and in the secondary. Their offensive line looked aging.

Jordan Mailata suddenly developed into a solid left tackle, who was paired with guard Landon Dickerson in last year's draft.

In the receiving group, tight end Zach Ertz was sent to Arizona to make more room for Dallas Goedert, who is meeting expectations. The acquisitions of AJ Brown, via trade, and DeVonta Smith, also in the 2021 draft, corrected many mistakes of the past.

On defense, the Eagles spent sensibly on the free agent market for two years for profitable players, such as tackle Javon Hargrave, cornerback James Bradberry and linebacker Kyzir White.

All without mortgaging their future, since they are betting still on two first-round picks next year, theirs and the Saints.

It is too early to say with certainty that the Eagles will be serious contenders for top honors this year.

What is certain, however, is that they carried out their expeditious reconstruction admirably well in n not afraid of controversial decisions like drafting Hurts, even though they already seemed to have their quarterback on board.

The game between the Packers and Buccaneers will feature two of the greatest quarterbacks of their generation and, incidentally, the two oldest on the league right now. For the last three meetings between the two teams, Brady and the Bucs are 3-0 and have averaged 33 points. It should be noted, however, that the two pivots must deal with groups of receivers diminished by injuries, not to mention the suspension of the ace of the Bucs, Mike Evans.

2. A Shanahan in Denver

In Denver, former head coach Mike Shanahan is one of the mythical figures of the franchise, he who had led the Broncos to two Super Bowl conquests, in 1997 and 1998. He returned to direct a game in Denver, in 2013, as a driver for the Redskins (now the Commanders). Today, his son Kyle will try to hurt the fans, he who leads the 49ers. He was also with his father during the last presence of the Shanahan clan, in the role of offensive coordinator. He often accompanied him on the sidelines in Denver during his youth.

The Lions are facing the Vikings, and their attack can no longer be taken lightly. Since their last game last season, they've scored at least 35 points in three straight games. Interestingly, they hadn't put up 35 points before this streak since Week 1, in 2018. For the first time since 1970, they broke that plateau in the first two games of a season. They are also one of only five teams this season to amass more than 400 yards per game.

Cowboys linebacker Micah Parsons is establishing himself as one of the most dominant defensive players on the league. He has already recorded four quarterback sacks. Facing the Giants, he will try to become the third player in history to start a season with three games of at least two sacks. Those who preceded him, Mark Gastineau (1984) and Kevin Greene (1998), are far from celery sticks.

In the first two weeks of activity, 12 games were decided by differences of three points or less. That's unheard of after two weeks in league history, according to NFL Communications. Last week, no less than eight games were settled in the last two minutes of regular time or in overtime. Hope the trend continues.