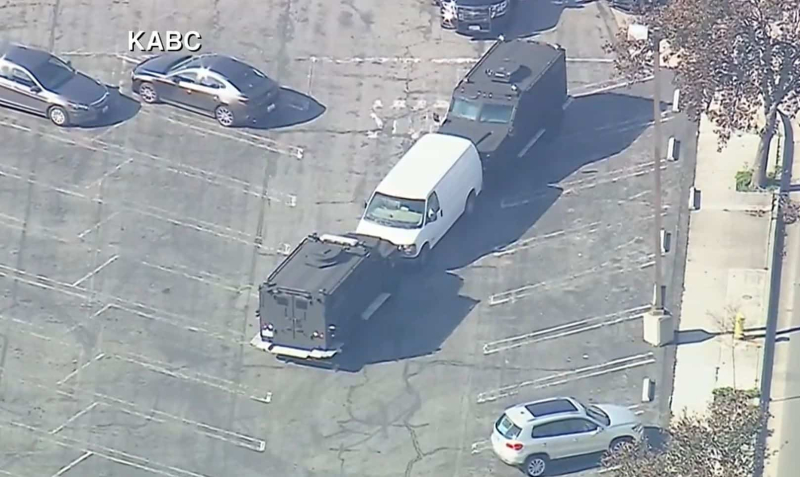 American police seemed to have surrounded on Sunday a shooter of Asian origin suspected of having killed ten people the previous evening in a dance hall near Los Angeles, whose customers were celebrating the Lunar New Year.

According to several local media, which broadcast live images taken by helicopter, the suspect would be in a white van on a parking lot in Torrance, south of Los Angeles, just over 40 km from Monterey Park, a city with a majority Asian population. scene of the killing.

The van was blocked in front and behind by armored police vehicles, noted an AFP photographer on the spot.

The police wanted to be cautious about the identity of the person in the vehicle.

“Could this be our suspect? It's possible,” Los Angeles County Sheriff Robert Luna said at a press conference.

“We believe there is someone inside. this vehicle. We do not know his condition, but we will manage it as safely as possible in order to try to identify this person, ”he said.

He had announced earlier in Monterey Park that law enforcement had launched a hunt to find the perpetrator of the attack, with an as yet unknown motive.

Law enforcement have responded to the first emergency calls Saturday at 10:20 p.m. and then discovered victims in the parking lot of the dance hall, explained Sheriff Luna.

The police entered the scene and “found many victims of gunfire.”

The 10 people who died are five women and five men, but have not yet been identified, Luna said.

“At least 10 additional victims have been taken to hospital,” he said, adding that “their condition ranges from stable to critical”.

On Saturday January 21, 2023 at 10:22 PM the suspect male/adult/Asian pictured above was involved in a shooting. Investigators have identified him as a Homicide suspect and he should be considered armed and dangerous.
Contact LASD Homicide with any information at 323-890-5000. pic.twitter.com/2gPUBBybvv

“At this time, our very preliminary description (of the suspect) is that of an Asian male” , added the sheriff.

CCTV footage released by police to identify the suspect shows an Asian man wearing a beanie and wearing glasses.

Very close to the scene of the tragedy, above a row of red lanterns, a banner wished residents a “Happy Year of the Rabbit”, noted an AFP journalist.

“It's is really very sad,” says Ken Nim, who has come to walk his dog in the early morning.

According to this employee of a computer company, who has lived in Monterey Park for more than twenty years, this residential suburb , which he dubs Los Angeles' “new Chinatown,” is a “place where not much normally happens.”

Indicating to pray with his wife Jill for the victims of the shooting, US President Joe Biden said he was “monitoring the situation closely”, in a tweet.

Investigators were also verifying information on a possible link with an attempted shooting the same evening at another dance hall in the nearby town of Alhambra.

“A suspect of Asian origin entered the dance hall with a weapon that was snatched from his hands before he 'he doesn't flee,' said Sheriff Robert Luna.

The weapon found “is not an assault rifle”, he clarified.

On Saturday night, tens of thousands of people had just gathered near the scene of the shooting in Monterey Park for the Lunar New Year festivities.

According to the owner of a nearby restaurant quoted by the Los Angeles Times, three people ran into his establishment at the time of the shooting and asked him to lock the door.

These three people said there was a man with a semi-automatic rifle and loaded with ammunition who reloaded his gun regularly, Seung Won Choi told the newspaper.

According to Sheriff Luna, investigators have not yet determined whether the victims were targeted because of their origins.

“All avenues are being considered. We don't know if this is a hate crime as defined by law,” he said.

The United States pays a very heavy price for the spread of firearms on their territory and the ease with which Americans have access to it.

That same Saturday evening, 12 people were wounded by bullets in a nightclub in Baton Rouge, the capital of Louisiana, a new illustration that no place in American daily life seems safe.