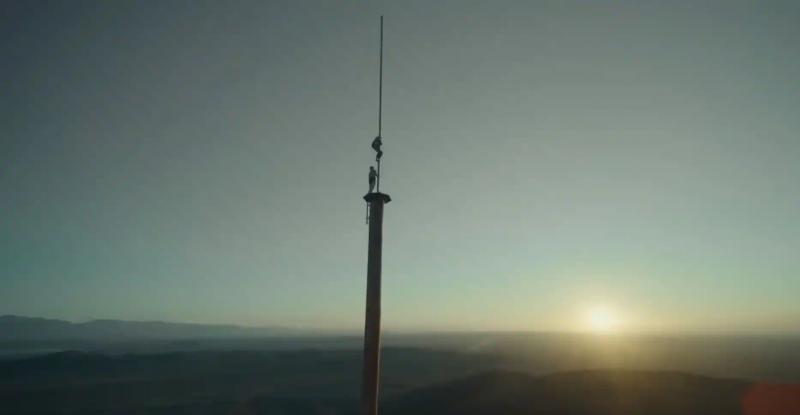 Survival films have this good thing that we have seen almost everything. The hungry shark circling a surfer in The Downs–Funds, The Hiker Stuck in a Crevasse in 127 Hours (a true story) , a rugby team lost in the Andes following the crash of their plane in Alive! (and it's also a true story)… In short, these are not the situations extremes that are missing.

Fall, a total fiction, features two friends. Becky (Grace Caroline Currey) is still traumatized by the death of her husband, while climbing a mountain with Hunter (Virginia Gardner), his wife's friend. Her father (Jeffrey Dean Morgan) tries somehow to bring his daughter out of her shell, but nothing helps.

Hunter then has the idea of ​​offering her to climb an old tower. radio transmission, more than 600 m high, all rusty and located – as it should be, otherwise it would not be funny – in the middle of the desert. Once at the top, they can't come down again, the ladder of the climb breaking under their weight.

Besides the inevitable cell phones, the walkers who don't see them and the distress flares that go unnoticed, we are treated to vultures (as hungry as those of Lucky Luke and which replace the sharks and other wild beasts too often seen) and dizzying shots.

< p>We know that the dialogues will not win an Oscar, any more than the performance of the actresses. As for the suspense… So effective, Fall? Yes, it makes you dizzy…