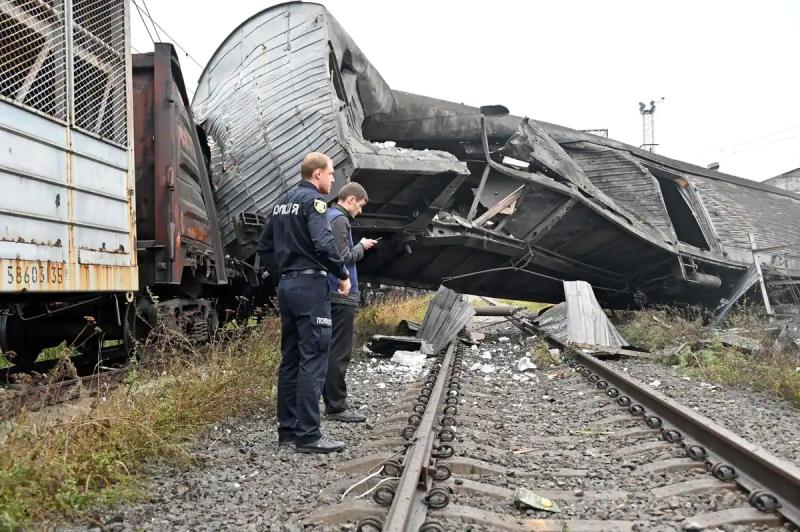 As an echo of the foreseeable escalation of the war in Ukraine after Vladimir Putin's announcement of partial mobilization, Russian missiles fell on apartment buildings and a railway depot in Kharkiv on Wednesday , the second largest city in the country.

“Our neighborhood was relatively quiet, and now you see what happened,” said Lyubov, 65, to AFP in front of one of the affected buildings, now badly damaged.

Grande A city in northeastern Ukraine, located just 40 kilometers from the Russian border, Kharkiv was attacked on the first day of the invasion launched on February 24. While the town resisted capture, it has since been pounded regularly by Russian forces.

In recent weeks, Kharkiv had been relatively unscathed, as a lightning Ukrainian counter-offensive drove Moscow troops out of the region. However, Russia can still fire missiles from its own territory.

Shortly before 2 a.m. on Wednesday, four missiles fell on the Kholodnogorsky district, hitting two residential buildings, a plot of construction and civil infrastructure. Fortunately, the strike only injured one civilian.

In the morning, it was Lyubov who noisily led cleaning teams amidst the rubble, drawing on her 45 years of experience in municipal services.

“War is a disaster. It's terrifying. It's painful… It's miserable. How is it possible to endure things like this? she laments, as anti-aircraft sirens continue to howl, mingling with the sound of bells from the golden domes of Hagia Sophia, where Orthodox worshipers have gathered to mark the Nativity of the Virgin Mary.

“So many people have lost their homes and winter is coming. It's awful. Every night we go to bed in fear. But we continue to work. They shoot and we work,” adds Lyubov.

The resumption of bombardments preceded by a few hours the announcement by Russian President Vladimir Putin of a partial mobilization to concern nearly 300,000 reservists, who will be sent to fight in Ukraine.

At the railway depot , the director of the site, Alexander Brykov, claims that a missile hit wagons and a section of railway track. Two gutted freight cars and a huge crater were visible.

Viktoria Ovtchinnikova, resident and mother of two children, feels “nothing but overwhelming fear”. “I'm afraid for the children,” says the 43-year-old woman. “It's a miracle we survived” the night's strike, she added.

“You see, they're killing civilians. There is nothing here apart from gardens and civilian houses,” says Svitlana, another resident of Kharkiv, indignantly. “I ask all Russians, may God give them the wisdom to flee, to ignore (the mobilization), to leave… to finally wake up, but not to come and fight us,” she implores. /p>

Galyna, 50, says she doesn't understand Russians. “We protect our homeland. This is our territory. This is Ukraine and they are waging a war… for what? Against who? she wonders.

“It's all happening now”

In Kyiv, the capital today far from the front, which has not been affected by the bombardments since the end of June, the mood seems more combative.

For him, the Ukrainians would do better to help their army than to follow the statements of the master of the Kremlin. “We understand that everything is at stake now: either we will defeat Russia, or it will occupy all of our territories,” he says.

< p>Same story with Andriï Savtchouk, another 27-year-old activist. “We will recover our territories without fail, regardless of the number of people they mobilize and if they continue to threaten with nuclear weapons”, insists the young man.

On social networks, this distrust that gradually took hold over the seven months of the Russian invasion was summed up in a meme that has been circulating since the announcement of Russian mobilization: a photo montage showing President Volodymyr Zelensky with his close collaborators holding a sign with the words “We don't care”.