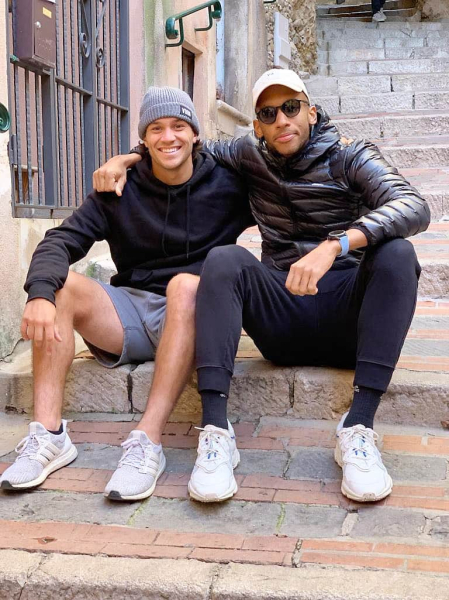 MALAGA, Spain | Once, during a tournament in Austria, Félix Auger-Aliassime and Alexis Galarneau were playing hide and seek with other players. They were 13 or 14 years old. To make sure they weren't spotted, they had holed up in the hotel's electrical room. The staff didn't like it. So one of the employees had… called the police.

“Nothing serious happened in the end. I was more the tanning one and Felix was the calmest. I still tried to set an example, because I was a little older, but Félix was always more disciplined, ”recalls Galarneau, 23 and the eldest of the duo by a year, a smile in his voice. .

Alexis Galarneau (left) and Félix Auger-Aliassime quickly became friends, but they were also rivals on the pitch at a very young age. Here they are shaking hands at the net, at the end of a match.

“Those are great memories! We went to tournaments together around the world. We did a few things like that… We tested the limits of our coaches too, which I think is normal at this age,” adds Auger-Aliassime, laughing.

It therefore goes back a long way to this friendship between the two Quebec players. But also the one that binds all the players of Canada present at this final phase of the Davis Cup, in the magnificent Malaga.

There is Auger-Aliassime, Denis Shapovalov, Vasek Pospisil, as well as Galarneau and Gabriel Diallo, both ranked outside the top 200 and who, barring an injury or a surprise, made the trip as substitutes and training partners (see other text).

If Félix and Alexis have known each other since they were 8 and 9 years old, Auger-Aliassime is also a good friend of Diallo. His father took him under his wing when he was cut from the National Tennis Canada Center in his early teens.

Diallo considers the world No. Aliassime in the Journal, during the United States Open.

And Félix has already called Pospisil a “big brother”. Then, of course, there is this link that unites him to Shapovalov, who started climbing the ATP charts around the same time as him, and with whom he won the US Open in junior doubles, seven years ago.

Denis Shapovalov and Félix Auger-Aliassime enjoyed some time off in New York ahead of their junior doubles final at the 2015 US Open. final they won.

This last round of the Davis Cup, which will begin Thursday for Canada, against Germany, is therefore the story of a gang of “buddies” who came to Spain to have fun. And to win, of course.

In short, to win while having fun.

“I think we probably have the best team spirit among the eight teams that are there, underlines Galarneau. I know less about the other formations, but it's difficult to beat the bond that unites a team that is made up of guys who have known each other since they were 8 years old. »

Alexis Galarneau, Nicaise Muamba, another hopeful of Canadian tennis, and Félix Auger-Aliassime, in Austria, in 2013. Was it at this famous tournament that Alexis and Félix hid in the room? electricity in a hotel, forcing employees to call the police? “I don't remember this anecdote that Félix certainly didn't brag about! replied his mother, Marie Auger.

“We all played against, we traveled together, Félix has been my best friend since I was 9 years old. It shows in the locker room and we really have fun, ”says the 23-year-old player, current 204th in the world.

“I grew up less with Denis, says Auger-Aliassime for his part . My childhood friends are more Alexis and Gabriel. But with [Shapovalov], I've had a lot of good times on the pitch since we were 15. So it's good to be together here. »

In a new format implemented this year, the final phase of the Davis Cup began on Tuesday, with a quarter-final between the Dutch and the Australians. It was the latter who reached the semi-finals, thanks to victories in three sets of Jordan Thompson, 84th in the world, and Alex de Minaur, 24th.

In addition to these nations, as well Canada and Germany, the other participating countries are the United States, Italy, Croatia and Spain. All qualified in September.

In each of the confrontations, there will be two singles matches and a decisive doubles match, in the event of a tie.

With the injury that forced the withdrawal of world number 1 Carlos Alcaraz, to the chagrin of the hosts, the maple leaf representatives are counting on the tournament's highest-ranked player in Félix.

A Félix who is aiming for nothing less than victory, having lost in the final three years ago. years, before the Spaniards.

However, the Canadians will have to be wary of another power, the Americans, represented in particular by Taylor Fritz, ninth, and Frances Tiafoe, 19th. The only other country betting on two top 20s – Shapovalov is 18th – they could meet in the semi-finals on Saturday.

“Yes, of course, the goal is to win! launches Auger-Aliassime. You have to be good for three days and the trophy will be ours. But we really want to win. »

Alexis Galarneau aims for the top 30

MALAGA, Spain | Those who sat in the stands of the IGA stadium last August have not forgotten the fierce battle that Alexis Galarneau offered to the Bulgarian Grigor Dimitrov, then the 19th in the world.

After five seasons in the NCAA, the Lavallois benefited from an invitation from the organization. And he had used it wisely: in his first presence on the central, Galarneau had almost got his hands on the second set. He snapped at the wrong time.

Three months later, here is the 23-year-old athlete ranked 204th in the world, thanks to his performances on the Challenger circuit. But Galarneau has much higher goals in his sights.

“This game in Montreal gave me a big boost of motivation. This year, my goal was to have the necessary ranking to participate in the qualifications of the Grand Slam tournaments, and that, I succeeded, he underlines. For next season, I'm aiming for the top 100. I think it's achievable. »

A coach in Europe

The Quebecois now trains with a Frenchman based in Milan, Yannick Dumais, who travels with him for a few weeks. The rest of the time, the work is done remotely. A formula that works well, rejoices Galarneau.

He also takes advantage of occasions such as the Davis Cup, where he was invited as a substitute to continue his learning.

Because barring an injury to one of the three starters – Félix Auger-Aliassime, Denis Shapovalov and Vasek Pospisil, all in the top 100 – neither Galarneau nor Gabriel Diallo should see action in Malaga.

They are there as training partners and also, to be “the best teammates possible”, explains Alexis. The Davis Cup has this particularity of allowing athletes to be on the bench to encourage players on the field.

Which, recognizes Galarneau, “is almost as stressful as playing! »

« Rubbing shoulders with Félix and Vasek, who are good examples, seeing their routine, the way they play the important points, it's a good apprenticeship”, he points out.

But if he can see Auger-Aliassime more this week, the two great friends have never lost contact.

< p>“We try to watch our respective matches. Sometimes I take advantage of the time when he receives his care after a meeting to write to him,” says Galarneau.

“We both understand that we are busy, so weeks like these , it serves us a little reunion. »