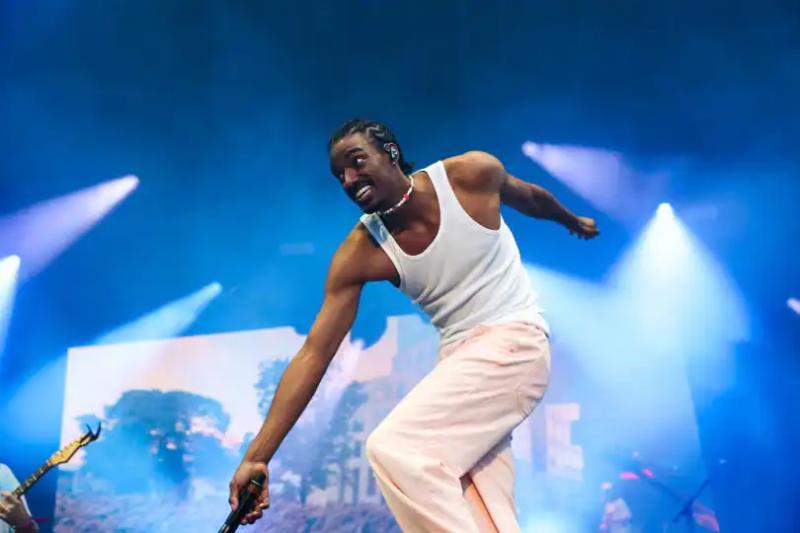 Shortly after 6 p.m., when lightning and thunder caused the evacuation of the Parc de la Francophonie during Claudia Bouvette’s performance, it didn’t bode well. Fortunately, the sun came out and Tai Verdes took matters into their own hands, before the arrival of English pop sensation Charli XCX.

Star of TikTok and online listening sites , with the hit Stuck in the Middle, the Californian did whatever it took to make sure the audience had a good time.

Sympathetic, dynamic and with an omnipresent smile on his face, he was in constant communication with the spectators, many of whom knew his songs and his sometimes very rock-and-roll pop very well.

“And you , back, raise your hands”, he will launch at the place of a spectator, before Let's Go to Hell, delivered at the beginning of the service.

Pressed by a solid trio of musicians, Tai Verdes asks the public to move, asks them to shout Go fuck yourself!; he launches himself on the ground and will make a little “dip” in the crowd during A-O-K.

“I won't leave Quebec without you kicking me high the eardrums”, he launched.

We then suffered a big shock, when the English pop sensation Charli XCX landed on the boards, with two dancers and pre-recorded tapes, to the sound of Lightning and the presence of lightning on the screen giant behind.

Bands that didn't seem to bother fans at all as they jumped and danced to the pop-electro sounds of Constant Repeat, I Love It , Baby, Yuck, Beg For You, 1999, Good Onesand others.

There wasn't a big crowd. A half “Dovecote”, for the one who, like Halsey, did not want to be photographed by the media. The 29-year-old singer, who wore a black bustier, long boots and a rather short skirt, moves a lot on the boards. A skirt that she pulled up for a fraction of a second during Hot in It.

Sometimes accompanied by pre-recorded voices, the very dynamic and energetic Charli XCX, who has multiplied “C'mon Quebec”, with a few words of French, has a powerful and precise voice. It sounded.

“I'm having so much fun,” she said after pulling up her skirt for a few seconds during Hot In It.

Charlotte Emma Aitchison then dedicated Boysto gay people in the audience and plunged the Parc de la Francophonie into a rave atmosphere with the final segment of Visions.

Around 6 p.m., at the start of her performance, Quebecer Claudia Bouvette spoke a little too quickly.

“I prayed all day. I am happy to see you. It is not raining. There is no storm. Thank God,” she said, full of energy.

A few minutes later, after a good version of Pardon Me, from her album The Paradise Club, the ex of Mixmania 2realized she might have gone a little too far.

“Maybe I spoke too fast,” the colorful singer said when the rain started falling, followed by lightning and thunder, which led, for security reasons, to the evacuation of the site.

A situation which caused the cancellation of the performance of the Australian collective Haiku Hands, which seemed promising and that we would have liked to see. Too bad.

The duo Magdalena Bay was able to start their tour on the boards at the scheduled time. The colorful Mica Tenenbaum, who put on a rabbit mask during the electric Follow the Leader, and the multi-instrumentalist Matthew Lewin, accompanied by a drummer, kicked off their performance by Secrets (You Fire).

Their synth-pop unfolded a bit unevenly over the next 40 minutes. We felt a beginning of communion settle at the very end with Good Intentions, from the album A Little Rhythm and a Wicked Feeling.