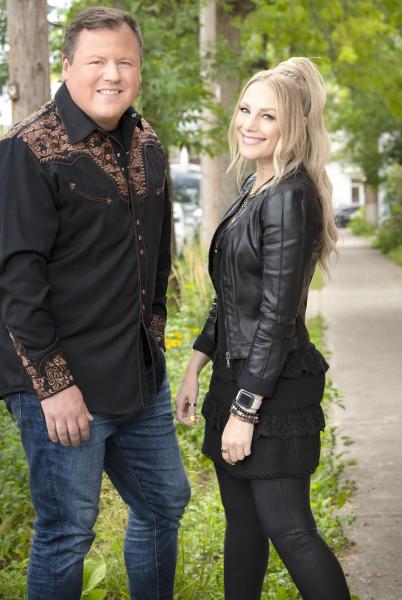 When Maxime Landry had the idea of ​​recording a Kenny Rogers tribute disc, he had no idea that by talking to his friend Annie Blanchard, he would find his Dolly. His album and concert series project has become a beautiful duo adventure called Jolene and The Gambler.

Kenny Rogers died on March 20, 2020 in the midst of a pandemic. At the same time, all shows were canceled indefinitely. It was a lot for Maxime Landry who took the opportunity to escape by re-immersing himself in his memories.

“The death of Kenny Rogers almost went unnoticed because of the pandemic, explains the singer of 35 year. There were no events to mark his departure. I wanted to pay tribute to this artist who marked my childhood and my family life, and when I spoke about it to Annie, who adores Dolly Parton, she said to me: it's a good idea and I can be your Dolly!”

Together, the two friends have selected 14 tracks – classics from the repertoires of Rogers and Parton as well as lesser known songs that they like to sing like Sweet Music Man and Why'd You Come in Here Looking Like That – which were to feature on this all-English tribute album.

They entered the studio in May and worked hard with producer Hubert Maheux, a collaborator longtime 45-year-old singer. The goal was to update the chosen pieces in order to make these covers “more new country”.

Just released to the general public, the album Jolene and The Gambler will be presented on stage , Sunday, September 11, at the famous Western Festival of Saint-Tite. The duo talks, eyes shining, of a large-scale show where they will be surrounded by six musicians and during which there will be many costume changes.

“It will be a big show, because we wanted it to be worthy of these two artists, explains Maxime Landry. People need nostalgia and to dive back into their memories. They also need to see a show that will entertain them and take them elsewhere.”

Other tribute songs, including some French pieces, will complement the show called Jolene and the Gambler – The country of our idolswhich will be held at the Country Club Desjardins. A first for Maxime Landry who has never before played as a headliner in the arena of the renowned western festival.

By Renée, she obviously means Renée Martel, this great lady who was nicknamed the Queen of Saint-Tite and who left us on December 18, 2021.

“She was a free woman, almost a second mom for me, says the singer from New Brunswick. She was a show-woman, she knew the job like the back of her hand, it was a school for me to rub shoulders with her.”

They will thus pay tribute to several greats of country music during this show by performing songs or medleys of pieces by, among others, Renée Martel, Paul and Julie Daraîche and Patrick Norman.

The two artists agree that it is with great gratitude that they offer this album, this show in Saint-Tite and this tour in come across Quebec. They confide that they were very afraid that the shows would never resume during the pandemic and that they were happy to be able to share the burden of this great project between them.

“It feels good not to carry everything on your shoulders, says Annie Blanchard. Maxime and I have the same vision of the world, of the profession and of the chance we have to do what we do. Our friendship grew in the work, we are both proactive and we complement each other well. We understand each other, we are able to talk to each other and we feel each other. Maybe we were brother and sister in another life…?»

♦ The album Jolene and The Gambler by Annie Blanchard and Maxime Landry is on the platforms.

♦ To get tickets for the show Jolene and The Gambler – The country of our idols< /strong> Sunday at the Festival western de Saint-Tite: festivalwestern.com/activites/jolene-and-the-gambler-le-country-de-nos-idoles/