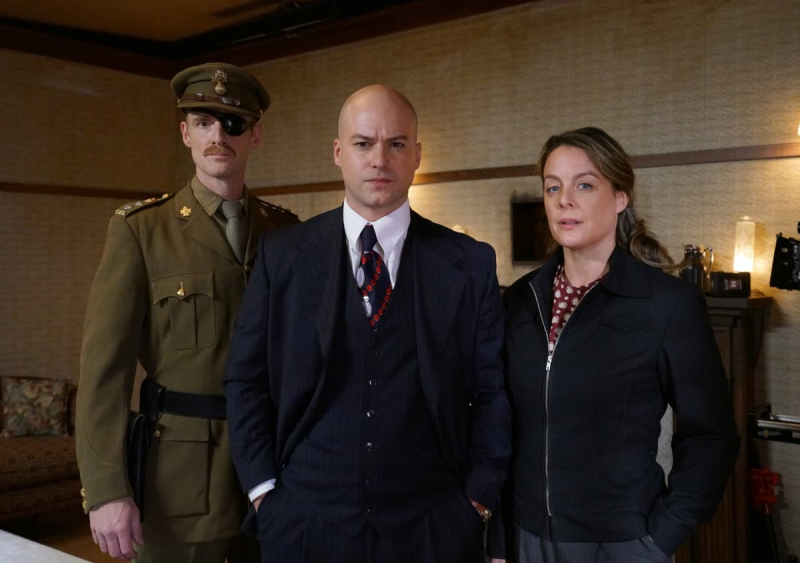 Screenwriter Gilles Desjardins had a blast recreating post-war Montreal for the black and period series “IXE-13,” in which we witness the birth of the Cold War , in a world where Quebec spies must stop the Russians who want to seize a quantity of enriched uranium to create an atomic bomb.

On the Main, in Montreal's notorious Red Light, soldiers who took part in clandestine operations during the Second World War – they were notably in charge of assassinating Nazi officers in occupied France – try to rebuild their lives, but they are called back into service by Colonel Victor Laporte (Vincent Leclerc), who is director of the counterintelligence service and, as such, in permanent contact with the Canadian Prime Minister.

All of them deal with traumas, but they don't have a minute to lose in the circumstances. This is the case of Jean Thibault, alias IXE-13 (Marc-André Grondin), who runs Club Christal and a former hotel above, a place that once belonged to the mafia.

His friend Marius Lamouche (Hugolin Chevrette) operates an adjoining boxing club. There is also Roxane Racicot (Julie Le Breton), who is now secretary at the Ministry of Foreign Affairs, as well as the cultural journalist Gisèle Tuboeuf (Marianne Fortier), who finds herself embroiled in this whole affair.

The set opened its doors to journalists on Monday, and seeing the period decor, there is no doubt that the creators paid for themselves by recreating the hotel, Jean Thibault's suite and the Lamouche boxing club. The scenery is majestic, enough to say that it feels like going back 75 years. The exterior shoots were all done this summer in Old Montreal.

This first season of “IXE-13”, which Club illico subscribers will be able to discover next year, takes place in six days, which adds suspense to the story. No detail has escaped Gilles Desjardins, whose rigor we know about his other series of eras, “Les pays d'en haut”.

Few people know it, but a Soviet network had succeeded in infiltrating the atomic research laboratory of the University of Montreal in order to seize enriched uranium . The goal was to create an atomic bomb and become an even more formidable enemy.

“There were real Quebec spies in Europe and the Cold War was born here, in Montreal and in Ottawa. I was inspired by the infiltration of the atomic research laboratory to set up the story. There was a big scandal and a commission of inquiry, people became paranoid. All that put together, it creates a world that we know very little about, but which is super interesting,” Gilles Desjardins told Agence QMI.

The Montreal of 1945 looks a lot like the Montreal of 2022, surprisingly, the eras coming together on the fronts of inflation, staffing and housing shortages, and then the Russians are still on everyone's lips, as they have been ever since. the beginning of their aggression in Ukraine, to which is added the return of the nuclear threat through Putin. Mr. Desjardins believed that there would be a historical distance, but it turned out to be quite different during his research.

We thus move away from the Cynics film, which had made “IXE-13” a comedy, drawing inspiration from the work of Pierre Daignault, alias Pierre Saurel, the one who created this universe of espionage in 1947 , before James Bond and Bob Morane. For the needs of the series, we are more in darkness, action and suspense.

“Gilles Desjardins took the characters from the IXE-13 series of books, which are a bit like James Bond, and he anchored them in a period reality that is super interesting. The psychological dimension is exploited through the action and they have traumas, like people returning from the war.”

“Victor is very withdrawn, taciturn, he is quite cerebral and very efficient. He was injured in one eye, which required me to adapt on the set. I'm happy to play in another period project and to find Gilles Desjardins.”

“Roxane is very complex and she is going to experience something quite painful. She has a great violence in her. The guys have to hold her back, because she's on a quest for some revenge. She could kill a lot more people than she does.”

“Marius , he's a strong man, that's why he has a boxing club. It is not very big, but dangerous. Even if it's for a good cause, the band will tear heads and break families.”

< p>“It was his job as a journalist covering the stars that brought him to Jean Thibault's hotel. She's going to come and ask questions and try to do an article, then it's going to give lots of twists and turns. Gisèle is super strong and ambitious.”