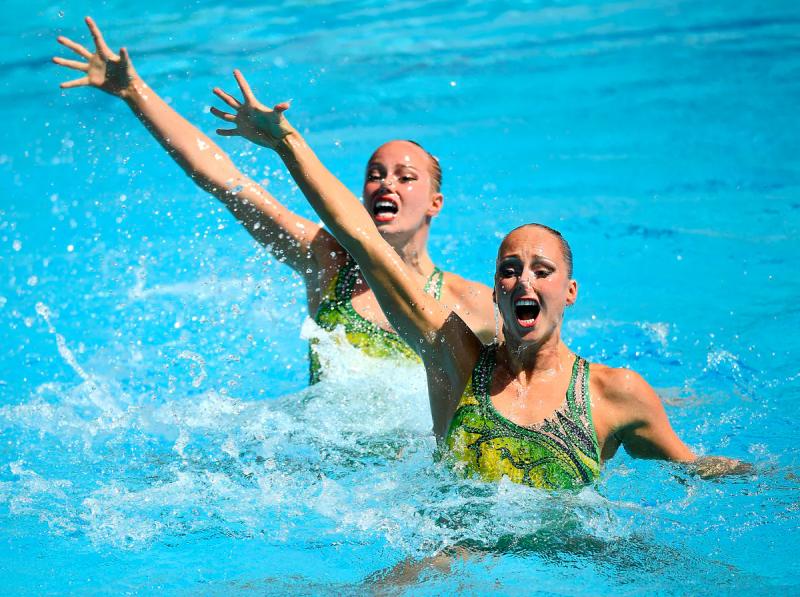 (Sportcom) – Canada's artistic swimmers competed in their first team final at the FINA World Championships in Budapest, Hungary on Tuesday. Seventh in qualifying for the technical event, the Maple Leaf representatives took eighth place in the final with a score of 84.4871.

The Canadian team had to deal with last-minute changes before the final. Alicia Rehel was injured during the warm-up period, 90 minutes before the start of their routine.

“It was a pretty special day. With the injuries, we did not swim with our usual team. It changes the preparation, we have to readjust quickly. We were ready for all eventualities. We are a very resilient team and we were able to respond well to the unexpected,” commented Audrey Lamothe in an interview with Sportcom.

“We wanted to focus on our performance and not on the place in the standings. We did the best swimming we could in these particular circumstances.”

Raphaëlle Plante was also called in as reinforcements for the final. Sydney Carroll, Scarlett Finn, Laurianne Imbeau and Kiara Quieti were the other Quebecers in action with Canada in the final round.

Of the eight Canadian participants in the competition on Tuesday, only Saskatchewan's Kenzie Priddell had already had the experience of the FINA World Championships. Despite the youth of the formation, it was not nervousness, but a feverishness that reigned during the preparation before the final.

“I do not want to speak for all my teammates, but I felt a certain excitement at the idea of ​​being able to shine and take part in this final. There was not necessarily any stress in the air before the performance despite the last minute changes,” explained Lamothe.

Canadian swimmers will have the chance to compete in another event on Friday with the presentation of the team free program where they will once again want to focus on their teamwork, rather than setting a goal for themselves.

For her part, Audrey Lamothe will take part in the free solo final on Wednesday. Her goal of reaching the final in this discipline having been achieved, she will now want to take advantage of the experience of a second individual final at these World Championships after the technical solo one.

“I wanted to deliver good individual performances as well. I am extremely happy with the work done. I managed to place ninth in qualifying for the free program. It will already be a third final for me and I am very proud of that,” she concluded.

Another stint for Katerine Savard

Quebecer Katerine Savard was back in action at the FINA World Championships to compete in a third event. After the 100m butterfly and the 4 x 100m freestyle, the 29-year-old swimmer was now tackling the mixed 4 x 100m freestyle relay with Javier Acevedo, Rachel Nicol and Yuri Kisil.

The Canadian foursome failed to do better than fifth place in their heat and were unable to advance to the final which was won by the Americans.

With her medal won in the women's 4 x 100 m freestyle relay on Saturday, the first of her career at the World Long Course Championships, Savard became the first Quebecer to have won at least one medal in all types of competitions on the international scene. .

Water polo: Hard start to the tournament for the Canadians

Canada's men's water polo team had the difficult task of facing the powerful Spaniards as curtain raisers at the FINA World Championships. The Canadians managed to contain the opposing attacks until the middle of the second quarter, finally losing 19-2.

Nicolas Constantin-Bicari and Reuel D'Souza were the two scorers for the Canadian formation which directed 19 shots on goalkeeper Unai Aguirre's cage. Felipe Perrone Rocha was the offensive star for the Spanish side with his five goals.

Jérémie Blanchard, Jérémie Côté, Aleksa Gardijan and Aria Soleimanipak were the other Quebecers in uniform in the Canadian squad.

< p>Canada will face Italy in its next game on Thursday.