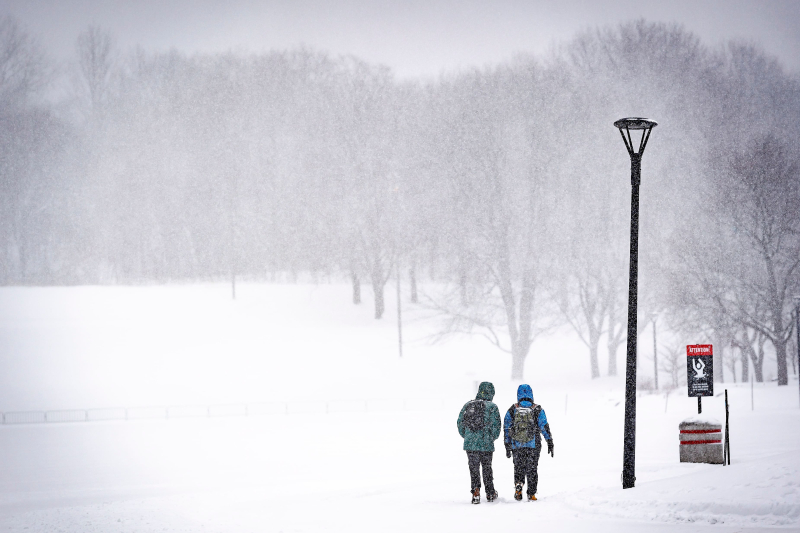 The storm that blanketed southern Quebec with snow is a delight for winter sports enthusiasts and ski resorts, who were chomping at the bit with the mild holiday season.

“We were impatient, it didn’t make sense. There was no snow, it took that. There, it is extraordinary! » says Jean Rondeau, who came to train on Mount Royal for the Pentathlon des neiges to be held in Quebec City on February 18.

Jean Rondeau was impatient to be able to train there.

The building inspector made good use of his Friday off. He intends to return this weekend to take advantage of the beautiful conditions, a balm after the thaw that melted the snow, making the trails impassable during the holiday season.

you have to take advantage of it

For his part, Olivier Lefrançois had not yet been able to take advantage of the slopes of Mount Royal, near his home.

Olivier Lefrançois was on his first outing this season.

I was a little disappointed with the weather over the holidays, it was bad. You have to take advantage of it when there is beautiful snow like that,” says the young cross-country skier.

After the storm of December 23, mild temperatures had led to the closure of cross-country ski trails in urban parks and in several regional parks in Montérégie.

Even in the Hautes-Laurentides, the trails were not optimal.

“There were holes in some places. We were in repair mode. But with the new snow, it is absolutely wonderful. The conditions are perfect,” rejoices Noémie Dagenais, spokesperson for the Montagne du Diable regional park.

The cannons have helped

The snow is also excellent news for downhill ski centres, which are less affected by the thaw since they are equipped with snow cannons.

But, above all, seeing beautiful snowflakes falling creates a passion for skiing among Montrealers expected in large numbers on the slopes this weekend.

Same story in Bromont, in the Cantons-de- the East, where the storm is just in time for the sleepless night on Saturday evening. Exceptionally, skiers will be able to enjoy the slopes until 1am.

“We would have done it anyway, but the snow is creating excitement, especially for occasional customers. says Marc-André Meunier, Director, Sales and Marketing.

Skating will have to wait

If the snow delights skiers and skating enthusiasts will have to take their troubles patiently.

Most of Montreal's 200 outdoor rinks were closed or still in poor conditions on Friday.