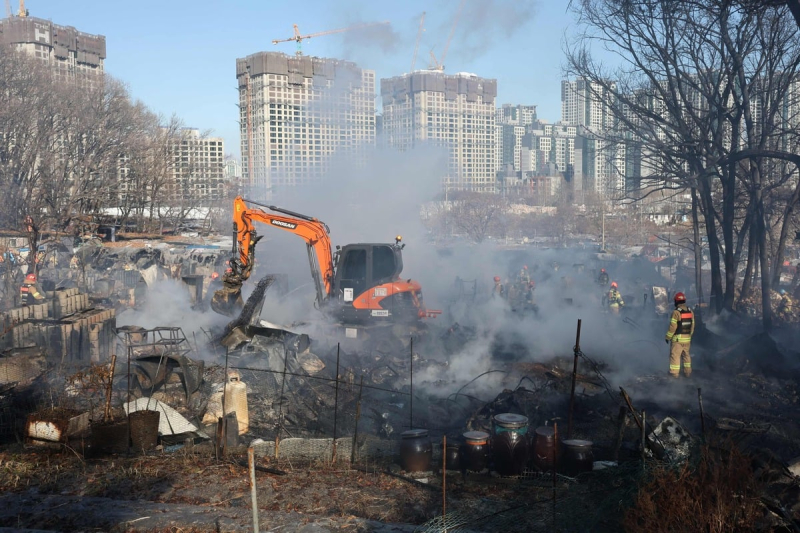 A massive fire has broken out in one of the last remaining slums in South Korea's capital Seoul, forcing 500 people to flee their homes ahead of the Lunar New Year holiday, authorities said.&nbsp ;

A video posted online shows flames ravaging the village of Guryong, a slum located in the shadow of the towers of the upscale Gangnam district, made famous by singer Psy's worldwide hit “Gangnam Style”.

The fire, which started around 6:30 a.m. (3:30 p.m. GMT), is believed to have burned around 60 homes and was completely extinguished by noon, according to firefighters.

No casualties were reported. been reported and the cause of the fire is still unknown, they added. head of Seoul Fire and Disaster HQ.

But locals said they weren't surprised by the fire.

“There have been a lot of safety issues in the community with regards to the fires, and it appears they are not have ever been properly considered” by the authorities, Lee Woon-chul, 65, who has lived in the village for 30 years, told AFP.

“The houses are very old and the electrical wires are dangerous and poorly managed. Sparks inside houses are common,” he added.

Since 2012, the neighborhood has been affected by at least eight fires, including Friday's, the AFP told AFP Gangnam district office in Seoul.

The village of Guryong came into existence around 1988, when destitute nearby residents were evicted from their homes as part of the nation's efforts to develop its capital before hosting the Olympics.

There were about 550 households left last year, according to official data, many of whom live with inadequate sanitation.

The village is a world away from the opulent and glitzy world of Gangnam, an area renowned for its luxury boutiques and apartments.

South Korea is struggling to address social disparities and has decided to last year to ban the cramped basement apartments made famous by the Oscar-winning film 'Parasite', after four people t drowned in their underground dwellings during floods.