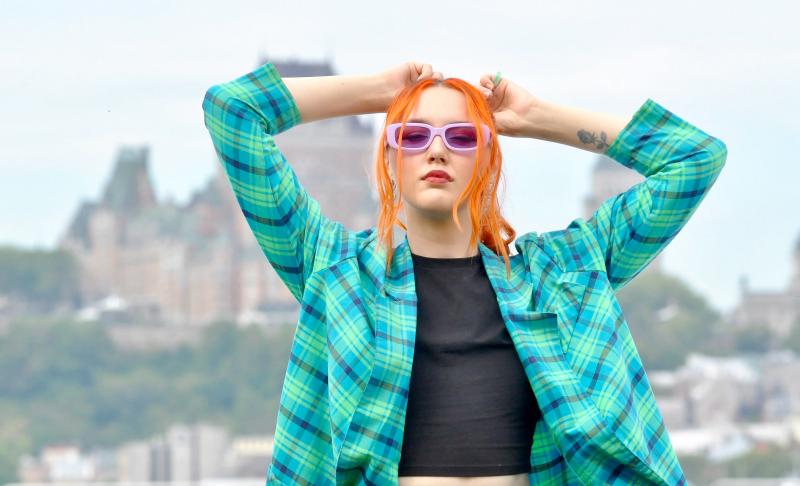 Open your eyes and ears wide, Rosalie Roberge reveals her colors. Under the name of Roselle, the young artist from Lévis follows in the footsteps of her older brother Vincent, alias Les Louanges, by releasing a first album.

In Aurore, we also hear the musical thread that binds the siblings. Even if it is more intended to shake the hips, the electro pop that tinkers with remarkable attention to detail the 23-year-old singer-songwriter occasionally borrows, like Les Louanges, from jazz, R&B and soul.

Seated in a cafe from Vieux-Lévis, whose location offers a magnificent view of Quebec City, Rosalie Roberge is not offended when her music is compared to that of her older brother.

“I think we're people of emotion, we like music that brings something to life and we definitely like little groovy and languorous beats,” she says, smiling.

For as long as she can remember, music has occupied a large space in the life of the voluble, curious and photogenic Rosalie Roberge.

Through her parents, she was introduced to classical, jazz, western and international artists as varied as System of a Down, Primus, Madonna, Manu Chao and Gorillaz. Eclectic menu, if there is one.

“My parents quickly showed us how to develop a certain musical curiosity.”

A career in music was therefore essential and as soon as he left CEGEP, things started to happen. After participating in La Voix, Rosalie Roberge was recruited by the Lost Fingers when they were looking for a new singer in 2019.

The Quebec group's concert program being rather busy, it was not until the pandemic sent everyone home, in March 2020, that the young woman was finally able to devote herself to her long-dreamed-of project, d recording an album.

“I took the opportunity to take the time to put together my demo, find my color and the style I want to do and get serious about it,” explains Roselle.

During her approach, she decided that she had things to say. In her songs, the one who defines herself as queer discusses the diversity of identities (Among all these letters), settles the case of a toxic ex (Fire), takes feminist positions (Tired and Shut your mouth). She also plays it in love, especially on one of her favourites, Bisous.

“In the press documents, the album is described as a mixture of sweetness and extravagance. Kissescomes to marry these two universes musically. There are big string arrangements, which corresponds to what I give off in life, and at the same time a lot of sweetness and simplicity in the lyrics. “Let me give you kisses”, it's very light.”

A coincidence of life meant that our interview with Roselle took place the day after the death of her maternal grandfather, to whom a song from the album, Take care, is dedicated .

Rosalie Roberge specifies that she was initially inspired by a friend suffering from a degenerative disease. However, the song took on an even more personal meaning a year ago when her grandfather was admitted to hospital with serious health problems, confronting her with the inevitable fate that awaits us all. .

“With Take care, I mean that the end is sometimes necessary and it is beautiful,” she affirms, wisely.

Technical sheet of the Aurore album