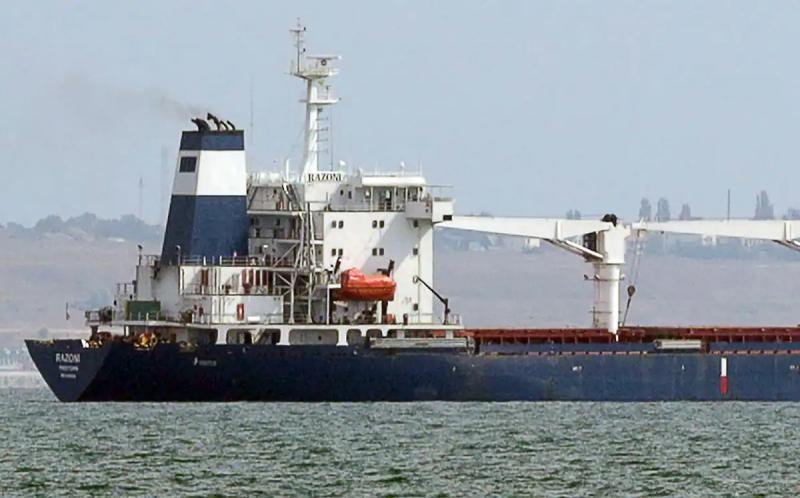 KYÏV | The first shipment of Ukrainian cereals exported since the Russian invasion on February 24, is expected “after midnight” in Istanbul, in application of the agreement signed in July between Kyiv and Moscow to to stem the global food crisis.

The Razoni, flying the flag of Sierra Leone, which left Odessa shortly after 9 a.m. (6 a.m. GMT) on Monday with 26,000 tonnes of maize bound for the Lebanese port of Tripoli, was initially announced in Istanbul early Tuesday afternoon.

Cereals have already left Ukraine since the Russian invasion on February 24, but from Berdyansk (southeast), on the Sea of ​​Azov, an area occupied by the Russians.

The ship is now expected “after midnight”, i.e. from 9:00 p.m. GMT, in Istanbul for inspection, according to the Turkish ministry.

The Razoni was in the night off the Romanian coast, but it disconnected its AIS, automatic identification system which allows its trajectory to be followed, around 2:00 am (23:00 GMT Monday), according to data from the Marine Traffic site.

During an interview with his Ukrainian counterpart Volodymyr Zelensky, French President Emmanuel Macron assured him of the continuation of “European efforts” to help kyiv to export its cereals.

According to the head of Ukrainian diplomacy Dmytro Kouleba, 16 other boats loaded with cereals are “waiting their turn” to leave Odessa, which before the war concentrated 60% of the country's port activity.

But Monday evening, Mr. Zelensky judged that “it is too early to draw conclusions and make predictions”, in his daily address. “Let's wait to see how the agreement will work and if security will really be guaranteed”, even if “it is a first positive signal that we will be able to stop the world food crisis”.

The agreement signed on July 22 in Istanbul between Russia and Ukraine, through the mediation of Turkey and under the aegis of the United Nations, allows the resumption of Ukrainian exports, blocked since the Russian invasion, under international supervision.

The agreement provides in particular for the establishment of secure corridors to allow the circulation in the Black Sea of ​​merchant ships and the export of 20 to 25 million tonnes of cereals.

For their part, the EU and NATO welcomed the departure of the Ukrainian grain ship and called for the “full implementation” of the agreement.

Moscow also considered the event “very positive”. “Let's hope that the agreements will be implemented by all parties and that the mechanisms will work effectively,” Kremlin spokesman Dmitry Peskov said.

A similar agreement signed simultaneously guarantees Moscow the export of its agricultural products and fertilizers, despite Western sanctions.

The two agreements should help alleviate the global food crisis which has seen prices soar in some of the poorest countries due to the blocking of Ukrainian ports.

On the ground, fighting continues and the Ukrainian authorities deplore civilian casualties.

Kryviy Rih military administration chief Oleksander Vilkul reported the death of two civilians on his Telegram account, who were on board a microbus trying to leave the occupied village of Starosillya. Five other people were evacuated, two of whom were seriously injured and hospitalized.

The city of Mykolaiv was “massively shelled” again overnight from Monday to Tuesday, a point established by the Ukrainian presidency Mykolaiv is close to the front in southern Ukraine, where kyiv forces are carrying out a counter-offensive.

In the neighboring region of Kherson, a city taken by the Russians on March 3, “the situation remains tense”, according to the presidency. But Ukraine announced on Monday that it had taken over 46 occupied localities there. first shipment of Ukrainian grain expected in Istanbul ” />

< p>Artillery is decisive in the conflict in Ukraine. Particularly hungry for projectiles of all kinds, the Ukrainian and Russian armies are engaged in a war of ammunition attrition, the stocks of which are crucial.

The United States, Ukraine's main support, has announced on Monday the shipment of new weapons to Kyiv for 550 million dollars, thus bringing their military assistance to more than eight billion in total. This aid will include ammunition for the Himars rocket launchers and 75,000 155 mm shells.

For its part, Russia on Monday banned the entry into its territory of 39 additional British personalities, including the chief opposition Labor leader Keir Starmer and former Prime Minister David Cameron in response to sanctions over the Ukraine offensive.