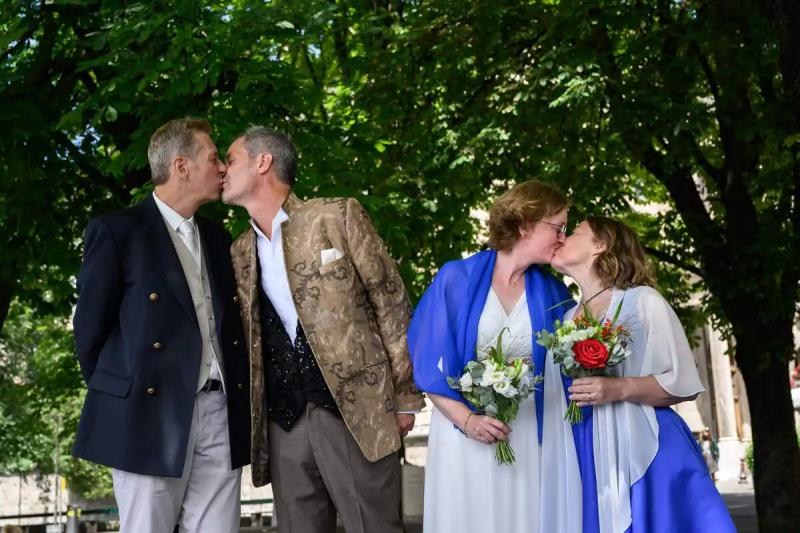 The first same-sex couples said yes on Friday in Switzerland, which officially adopted universal marriage in a referendum less than a year ago.

Among the first brides Aline, 46, and Laure, 45, who have been in a relationship for 21 years and who said yes under the sumptuous molded ceilings of the Palais Eynard in Geneva.

< p>Aline and Laure, who came with a dozen friends to what is considered the seat of the city's administration, held hands throughout the ceremony and exchanged good wishes nourished by the memories of their long relationship and their love.

“I now have the immense pleasure of announcing that you are officially married”, solemnly declared Marie Barbey-Chpuis, the mayor of the city who wanted to officiate in person for this first historic ceremony.

< p>The two brides kissed, as tradition dictates, to loud applause from the congregation.

“It's very moving. It is a moment that is very strong and which sends a very strong message to society: that of being free to love and to be loved, “said the mayor to AFP.

“The symbolism was particularly strong and the emotion too, naturally”, she added.

“It was time in Switzerland for marriage to become perfectly egalitarian”, underlined the mayor, in insisting on the historical aspect for the country and for the institution of marriage itself.

The Swiss have launched a resounding yes in favor of marriage for all in a referendum on September 26, 2021, imposing a crushing defeat on its opponents, who want to see it as a threat to the well-being of the child.

The yes had then won 64, 1% of the vote and all the cantons of the country, including the most conservative ones, voted in favour.

Switzerland was one of the last countries in Western Europe to take the plunge.

While same-sex couples have been able to enter into a civil pact in the country since 2007, the new law gives them new rights and provides in particular that same-sex couples sex can adopt r a child jointly.