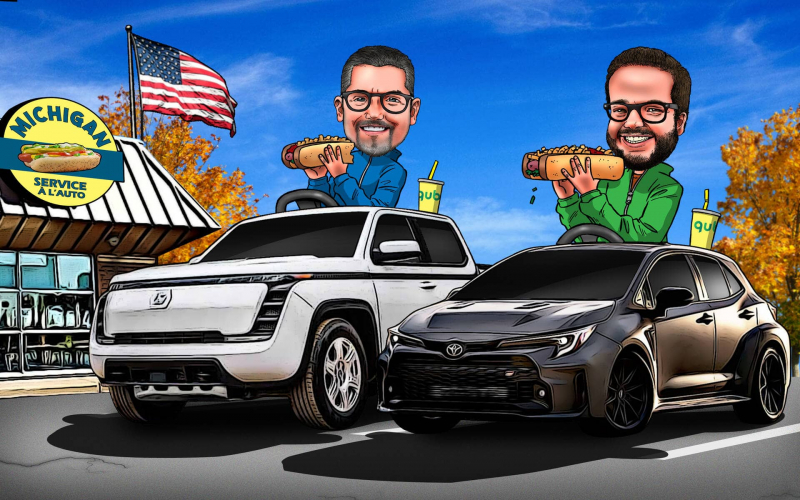 On the occasion of the North American Car And Truck of The Year (NACTOY), Antoine Joubert traveled to Ann Arbor, Michigan to test drive the most anticipated novelties for 2023.< /strong>

Back from his trip, he shared his first impressions of the Lordstown, Ford F-150 Lightning Pro, Toyota GR Corolla and Audi Q4 e-tron with Germain Goyer and listeners on Le Guide de l'auto on QUB Radio .

An American company has bought the former General Motors factory, in Lorsdtown, where the Chevy Cruze. Borrowing the name of the city where the factory is located, this new automaker has designed an all-electric van for commercial purposes.

“This is a 6.5-foot box full-size crew-cab pickup truck. On board, it is a utility finish. […] It has a 108 kWh battery and the range is around 350 kilometres. […] Driving is rudimentary. You hear a lot of road noise. There are vibrations. You have the impression of an American vehicle with a limited level of refinement,” says Antoine.

Unfortunately, there are currently no plans for this manufacturer to market its vehicles in Canada. It is only sold in three US states.

The convincing Ford F-150 Lightning with the small battery

With the F-150 Lightning, Ford offers a choice of two batteries with capacities of 98 and 131 kWh. Antoine Joubert had the opportunity to compare the two and his preference couldn't be clearer.

“I've come to the conclusion that there's a balance between the extra weight that a bigger battery adds to a vehicle and the weight savings that allows you to get more out of a smaller battery. battery. There are 800 pounds between an F-150 Lightning Pro and a Lightning Platinum. The road behavior is clearly to the advantage of the Pro model,” says Antoine.

He predicts that the Ford F-150 Lightning will win the Truck of the Year award.

Third member of the GR family, this extremely sporty version of the Corolla is the only one to be a 100% genuine Toyota. Remember that the GR Supra and the GR 86 were respectively developed in partnership with BMW and Subaru.

“It's a beautiful looking car. The car is short, stocky and the tracks are widened. She has character and I like that. It has a three-cylinder turbocharged engine, a manual gearbox and four-wheel drive in addition to a limited-slip differential. It's an impressive machine, but its interior is disappointing,” says Antoine about this new bombinette which intends to compete with the Volkswagen Golf R and Honda Civic Type R.

To its range of electric vehicles, Audi is adding an SUV with a format comparable to that of a Q5 for 2023. This is the Q4 e-tron which shares its technology and many of its components with the Volkswagen ID.4.

“The Q4 has nothing to do with driving the Volkswagen ID.4. It's literally a Q5, but electric. We have the same precision in the steering, the same solidity of the chassis and the same pleasure behind the wheel”, launches Antoine.

Unfortunately, the Sportback version is not eligible for government subsidies while the version regular is.

During this Car Guide program, we also discussed the unveiling of the 2023 Ford Escape and the recall concerning the Volkswagen Golf GTI and Golf R.

Antoine Joubert and Germain Goyer answered questions from the public about the Volkswagen Arteon, Toyota Camry, the lifespan of a clear protective film, the Chrysler Pacifica plug-in hybrid and the Honda Odyssey .

The Car Guide is every Saturday at 10 a.m. on QUB Radio, repeating on Sundays at 6 p.m.