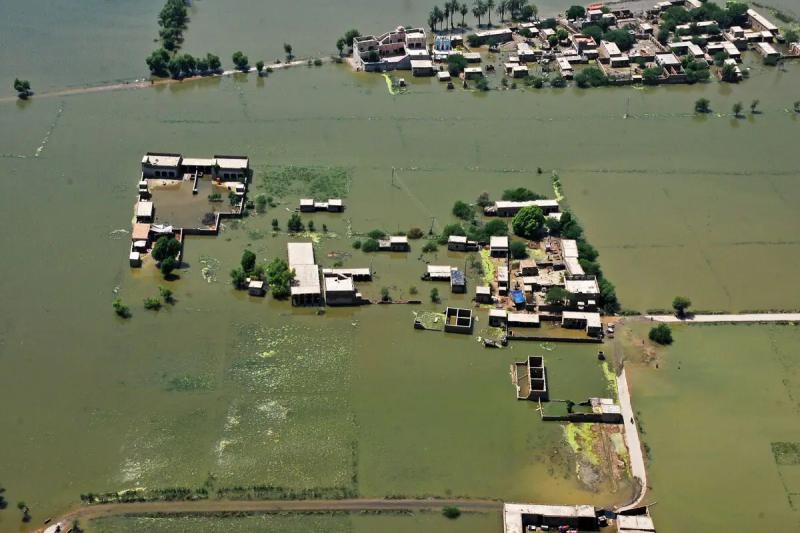 MADYAN | Pakistan continued on Wednesday to mobilize all the means at its disposal to rescue the millions of people affected by the worst floods in its history.

Floods from monsoon rains have submerged a third of Pakistan, killing 1,191 people since June according to a report released Wednesday, devastating large swathes of critical farmland to the economy, and destroying or seriously damaging more than one million homes.

“Pakistan is awash with suffering. The people of Pakistan are facing a cataclysmic monsoon,” UN Secretary-General Antonio Guterres said Tuesday, appealing for $160 million to fund an emergency plan for the next six months. p>

The World Health Organization (WHO) announced on Wednesday that it was placing Pakistan on its highest level of alert and releasing $10 million from a fund to urgently to help him.

More than 33 million people – one in seven Pakistanis – have been affected by what Pakistani Prime Minister Shehbaz Sharif has called “the worst floods in Pakistan's history”.

His government believes that at least $10 billion will be needed to repair the massive damage to infrastructure, particularly in telecommunications, roads and agriculture.

The priority for now, however, remained to reach the thousands of people stranded in the mountains and valleys of the north, and in the isolated villages of the south and west.

“We desperately need 'help,' said Muhammad Amir, whose village of Balaqot is inaccessible by road after the Swat River flooded in the northwest. “We absolutely need medicine.”

“There has been no electricity in our village for almost a week. People don't even have a candle to light. Many people suffer from diarrhoea.”

The WHO has warned of the risk of the appearance of water-related diseases (diarrhea, skin diseases, respiratory infections, malaria, dengue… ) in a country facing “damage to health infrastructure, lack of health personnel and limited health equipment”.

In an improvised clinic in Sind (south), doctors were treating patients who had to walk barefoot in dirty, muddy water filled with various debris.

“One of my child’s feet is very sore. Mine too,” said Azra Bhambro, a 23-year-old woman who came to seek help there.

Pakistan has received twice as much rainfall as usual, according to the meteorological service. In the most affected southern provinces (Balochistan and Sind), rains were more than four times the average for the past 30 years.

Padidan, a small town in Sind, received the equivalent of 1.75 m of precipitation since June.

The monsoon, which usually lasts from June to September, is essential for the irrigation of plantations and the replenishment of water resources in the Indian subcontinent. But Pakistan had not seen such heavy rains for at least three decades.

He blames the devastating floods on climate change, which is increasing the frequency and intensity of extreme weather events across the planet.

This year, the country has already faced a heat wave that has at times above 50°C, to devastating forest fires and devastating floods caused by rapidly melting glaciers.

Pakistan is responsible for less than 1% of global greenhouse gas emissions , but it is ranked 8th among the countries most at risk from extreme weather events, according to a study by the NGO Germanwatch.

The government has criticized the major industrialized countries for their role in global warming, accusing them of having enriched themselves through fossil fuels without having considered the consequences.

Highly dependent on its agriculture, Pakistan expects its already struggling economy to be hit hard. The prices of certain foodstuffs threatened with shortages – in particular onions, tomatoes and chickpeas – have already risen sharply in recent days.

The United States announced on Tuesday a first shipment of humanitarian aid, worth $30 million. Cargo flights have started arriving from China, Turkey and the United Arab Emirates.

Makeshift camps have sprung up all over the place to accommodate the displaced, who have to contend with the high heat and lack of drinking water and food.