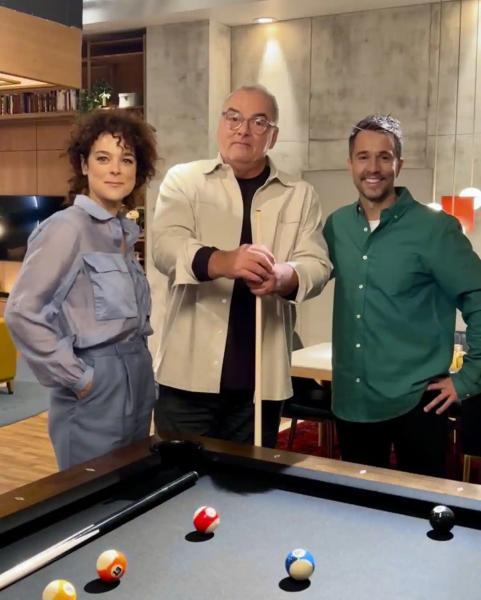 Gildor Roy and his new neighbors from “La Tour”, Hélène Bourgeois Leclerc and Alexandre Barrette opened the doors of their respective condos on Thursday, a few days before the recording of the first episodes of the third season.

The Trio Orange team, which produces “La Tour” in collaboration with Quebecor Content, has created living spaces in the image of each of the occupants.

Let's say it right away, the condos are splendid. That of Gildor, which he “bought back” from the former animator Patrick Huard, has been renovated so that it sticks more to the personality of its new occupant. The designer Andréane Beaudin favored at her request everything that is “southwestern” inspired or even Navajo fabrics.

“She created a beautiful frame with a photo of my father when he was a soldier and was stationed in Germany. It's extraordinary! There are also touches of Cuba where I liked to shoot, my baseball jersey when I played in the Dominican Republic and the Olympic Stadium because I sang there at Felipe Alou's birthday. There's even a banjo-playing dinosaur, which brings together my interests in archeology and music.”

Recordings begin next week in preparation for the season debut on the 12 next September. Gildor Roy is eager to break the ice. “I can't wait to have done 10 'shows' and remember that I can do that,” he joked, having turned down two movies and two TV series since the end of “District 31.

“I chose animation to avoid comparison. That's really why, because no matter what I would have done, people would have compared it with Commander Chiasson.”

A place to stay for Hélène< /p>

Like her friend Gildor, Hélène Bourgeois Leclerc is happy to now have a “pied-à-terre” in Montreal. “I am feverish, excited and a little scared, because it is a big deal. At the same time, the more it goes, the more it becomes clear in our heads.

The actress, who hosts the culinary competition “Le Restaurant” in Zeste, finds her decor “soothing” and “very welcoming”. It is indeed a very zen atmosphere, there is a huge bench to chat over a good meal and two huge islands in the kitchen. “It puts me in a form of confidence and openness. We don't feel like we're doing TV.”

She does not give up the game – she has just shot “a very nice little role” in the series “High Demolition” – but she wanted to “bring others to light”. “In my heart, I'm an actress, but I'm a broadcaster too. I reassure you, and I also reassure myself, there will be other game projects.”

A nod to tennis for Alexandre

< p>As for Alexandre Barrette, the designer has captured her taste for mid-century furniture and vintage alongside modern furniture. An industrial fence even makes the bridge with tennis, like a net, this sport being his greatest passion.

“I find it sick! It hurts me not to live in the condo for real!”

Alexandre, who will not return “by choice” to “Everybody talks about it” as a rotating court jester, wishes to bring his humor, his sensitivity, his curiosity and his irreverent side to “La Tour”.

< p>“With a little tip or a question, a guest may say something he wouldn't have said if I hadn't intervened. I want to be at the service of the show and the guests.”

We can see him this winter, still on TVA, co-hosting the new reality show “Sortez-moi d’ici!” alongside Jean-Philippe Dion.

The program “La Tour” will be broadcast on TVA from Monday to Thursday, at 7:30 p.m., starting September 12.

There will still be sketches at “La Tour” featuring actors Jean-Marc Dalphond (Robert), Hélène Major (Murielle) and Oussama Fares (Samy). But as “La Tour” continues to evolve, the show will also count on the special participation of Jean-François Breau and Marie-Ève ​​Janvier, Marc-André Coallier, Alexandre Forest as well as Sonia Vachon