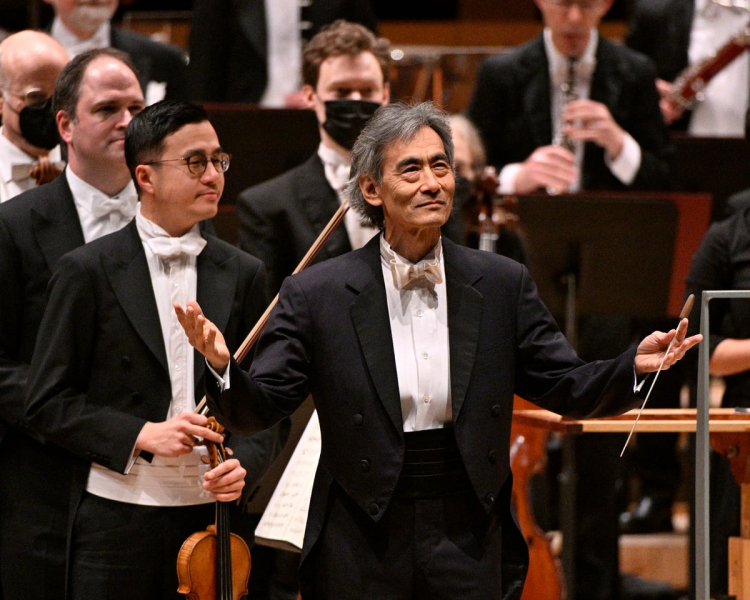 After a stint in March 2021, during concerts where he had been able to say his “goodbye”, Kent Nagano was back on Tuesday at the Maison Symphonique for three evenings. Taking up his baton as OSM conductor, the great maestro conducted a repertoire that is dear to him with symphonies by Mozart and Schubert.

It's a bit of a gift that the much-loved maestro offered himself, he who celebrated his 71st birthday that very day, by reconnecting with the affection of his loyal audience.

Warmly welcomed to loud applause, the chef emeritus came on stage all smiles to join his 54 musicians, under the watchful eye of Rafaël Payare who was watching the event from the balcony. The OSM's eighth and ninth music directors would later meet for the very first time after Maestro Nagano had delivered, in the image of American presidential tradition, a letter to his successor at the handover.

It was with Schubert's Symphony No. 3, composed by the Viennese when he was only 18, that the concert began. Slowly at first, with an ascending maestoso adagio, into which the wind instruments were quietly integrated, the work's character full of freshness and joviality then imposed itself while Maestro Nagano provided precise and fluid direction. . Appropriately, the symphony ended with its fast-paced final movement, reminiscent of the tarantella, that festive Italian dance.

The orchestra was then joined by Jane Archibald wearing a sparkling black and emerald dress. The strings, joined by the winds, began Mozart's motel Exsultate, jubilate, before the soloist began her enveloping song. Born in Nova Scotia, the soprano, who has sung in some of the most prestigious opera houses in the world, displayed an ease on stage with a touching and emotional vibrato.

The concert ended beautifully with one of the Austrian composer's most accomplished works, Symphony No. 41 , say “Jupiter”, composed shortly before Mozart's death. Opening with impetuous force, with trumpets and timpani, the majestic symphony was savored under the penetrating direction of the conductor.

When he returned to the stage, after a standing ovation standing up from the audience, the conductor emeritus was entitled to the underlining of his birthday with the excerpt from Gens du pays delivered as a surprise by the entire orchestra, joined by the audience. A touching moment!

Kent Nagano will again conduct this repertoire on Wednesday and Thursday, November 23 and 24, at the Maison Symphonique. Tickets are available on the OSM website.