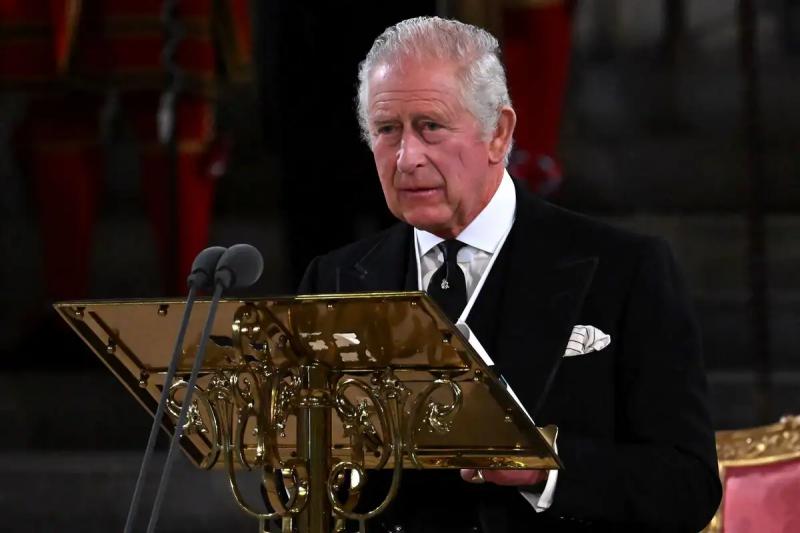 LONDON | King Charles III addressed the British Parliament for the first time on Monday where he said he “felt the weight of history” and wanted to follow the “example” of his mother Elizabeth II, at the start of a week of farewell to the sovereign.

Four days after the death of Elizabeth II in her Scottish residence of Balmoral, her coffin will be exhibited in Edinburgh at the end of a procession with her head Charles III and Queen Consort Camilla, another leg of a final emotional journey to the state funeral on September 19.

Before heading to the Scottish capital, the new King received condolences from the Speakers of the House of Lords and the House of Commons in the British Parliament in London.

“As I stand before you today, I cannot help but feel the weight of history that surrounds us and reminds us of the vital parliamentary traditions to which deputies of both chambers devote themselves,” said the Sovereign in a short speech.

He claimed that his mother was “an example of devotion which, with God's help and your guidance, I am resolved to follow faithfully”.

Elizabeth II remained during her 70-year reign a head of state with irreproachable neutrality, fulfilling her constitutional functions without ever publicly expressing her opinions, opening Parliament, promulgating laws, validating appointments, and enthroning again, two days before dying at the age 96 years old, its 15th head of government.

Charles III installs himself as monarch with the difficult task of succeeding his very popular mother in a context of serious social crisis and divisions in the United Kingdom, but also of protest against the colonialist past in its 14 other kingdoms.

He tackles it at 73 years old, older than all the British sovereigns on their accession to the throne.

In Edinburgh, the British will finally be able to approach their so popular queen. Many of them will no doubt flock to Saint-Gilles Cathedral to try to pay homage to him as closely as possible.

“I will surely go to see the coffin, just to pay my respects. It's something I won't get to see again. I needed to do something, I wanted to be here today,” Steve Crofts, 47, who lives near the Scottish capital, told AFP.

“I'm torn, c It's the end of an era, but after listening to Charles over the past few days, I think he's ready,” said Sue Stevens, a 79-year-old Englishwoman.

Charles and Camilla behind the coffin

The coffin will leave the Palace of Holyroodhouse, the royal residence where it spent the night after being transported from Balmoral on Sunday at 2.35 p.m. to reach Saint -Gilles.

The crowd should see the King and Queen consort as they will both walk behind the hearse, while the other royals will follow in carriages, during the half-hour procession -hour, over a little over a kilometer.

During the religious ceremony that will follow, the crown of Scotland, in solid gold, will be placed on the coffin.

The Queen's remains, a symbol of stability during decades of upheaval, a planetary icon that reassured the British in times of crisis, will remain on display in the cathedral for 24 hours, which should lead to a massive influx.

Charles III is to receive the first Scottish independence minister, Nicola Sturgeon. Then, at 7:20 p.m., a private funeral wake will begin for the royal family.

Removed from the monarchy since the resounding “Megxit”, Prince Harry joined in the tributes to Elizabeth II, whom he described as a “compass”, thanking his “granny” for her sense of duty and her “contagious smile”: “You are already sorely missed”.

Sunday, the curious waited for hours to be sure of being in the front row so as not to see, if only for a few seconds, the oak coffin passing aboard the hearse.

After being Presented for 24 hours to the public, the body will be flown from Edinburgh Airport on Tuesday evening on a royal plane to London.

It will again be on public display 24 hours a day , closed, draped in the royal standard, on a dais at the Palace of Westminster from Wednesday evening.

Long queues – which could reach five miles – are expected as 750,000 people may attempt to view the coffin, according to The Times newspaper.

La Elizabeth II's remains will remain in Parliament for five days before the state funeral. Some 500 foreign dignitaries are expected – a considerable security challenge for the police – including US President Joe Biden, his French counterpart Emmanuel Macron and Australian Prime Minister Anthony Albanese, as well as many crowned heads.

Andrew, often referred to as Elizabeth II's 'favourite son', will not be allowed to wear his uniform, confirming his ostracism from the monarchy following the sexual assault charges he ended by paying million dollars.

The day before the event, on Sunday, the public will be called upon to mark a minute of silence at 8:00 p.m., Downing Street said, “a moment of reflection” in memory of the sovereign at longevity unmatched in UK history.