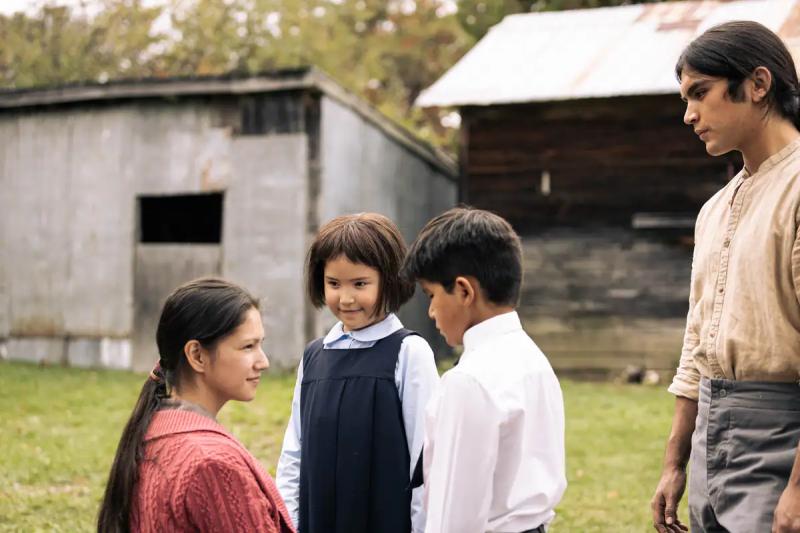 The series “For you Flora” recounts the trauma of a sister and a brother of Anishinaabe origin who were torn from their parents by the Oblates in the 1960s and sent to an Aboriginal residential school in Abitibi-Témiscamingue.

Five decades later, Rémi (Marco Collin) – his original name was Kiwedin – is writing a book to tell his story and that of his sister Wabikoni, trying to reconnect with her through words. The latter cut ties with her family and became Flora Turcotte (excellent Dominique Pétin), a very religious woman.

When Flora hears on the radio that the Oblates are the target of multiple accusations concerning their management of the Indian residential schools, she suffers from a panic attack. Learning the same day that his daughter Julianne (Virginie Fortin), an editor, received Rémi's manuscript, his reaction is even stronger. Julianne and her brother Antoine (Antoine Pilon), a policeman, do not know anything about their mother's past as a boarder, not even knowing that she is Anishinaabe.

Flora suppressed everything and was distant with her children throughout her life. Rémi, he abused alcohol and resorted to violence, thus alienating him from his son Jean-Charles (Samian).

During the six episodes written and directed by Sonia Bonspille Boileau – whose grandfather Mohawk and his sisters were sent to a Native boarding school – we can see the reality of these young people whom we wanted to assimilate and who were often abused, as hundreds of indigenous people told the Truth and Reconciliation Commission. The back and forth between the past and the present as well as the narration of Rémi who speaks to his sister through his book allow us to take the measure of the consequences of this abuse, which has become intergenerational trauma.

We therefore see, in “For you Flora”, mistreatment and scenes suggestive of sexual assault, by “black dresses” which send shivers down the spine as they are cruel and insensitive. These are embodied by actors Chantal Baril, Charles Bender, Théodore Pellerin and André Robitaille. Only Sister Émilie, played by Sophie Desmarais, and Brother Chiasson, played by Jean-Carl Boucher, seem to have a bit of heart.

Sonia Bonspille Boileau told Agence QMI that she wanted to do useful work with this television project by raising awareness among the general public of the reality of residential schools, especially in Quebec where, according to her, many people still believe that they concern only the rest of Canada.

She believes that fiction allows us to go further than the simple knowledge of these historical facts.

“It's like another level. My personal goal is achieved, because people are touched and learn important things in the series, they are aware and have empathy towards the survivors. I also wanted to show that we can tell ourselves, that we have developed narrative sovereignty and it no longer needs to be the others who tell us. We can do even more, maybe the next thing will be a comedy.”

Sonia Bonspille Boileau is working on a new project for series in French which will feature “other beautiful native characters”. She did not wish to say more about the project.

Produced by Nish Media, “Pour toi Flora” is in official competition in the Foreign French-speaking Fiction category at the La Rochelle Fiction Festival, which takes place from September 13 to 18. Two other local productions, “Moi non plus” (Encore Television) and “Piégés” (Dus Productions) are also in the running.