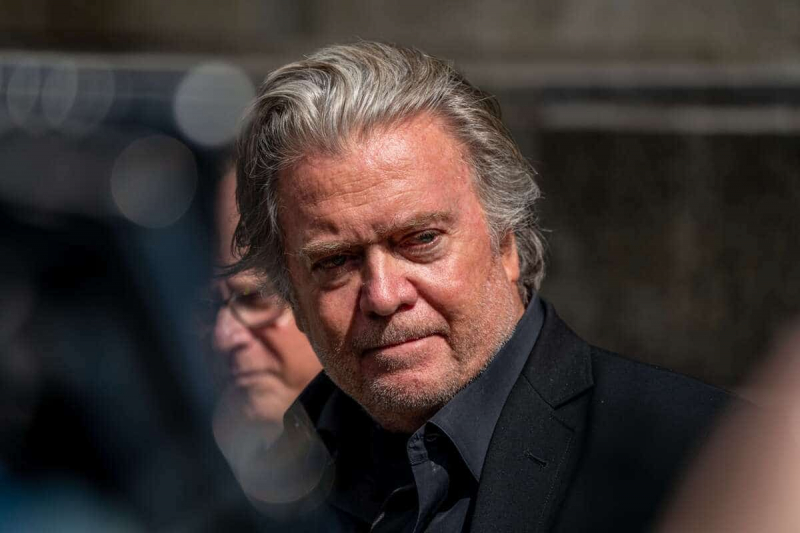 Steve Bannon, who was an influential adviser to Donald Trump in the White House, was sentenced Friday to four months in prison for refusing to cooperate with the congressional investigation into the assault on the Capitol.

The 68-year-old man, a figure of right-wing populism in the United States, immediately announced his intention to appeal, which suspends the application of the sentence.

He was therefore able to come out of court free. In front of the cameras, he assured “to respect the judge's decision”, but immediately slipped into political territory.

“November 8 will be the day of judgment for the illegitimate regime of (Joe) Biden (…) and we know how it will end,” he said, referring to the midterm elections, in which Democrats could lose control of Congress.

Quoting several members of the Jan. 6 Commission of Inquiry, tasked with shedding light on Donald Trump's role in the coup by his supporters, Steve Bannon predicted that they “would be beaten”.

Refusing to respond to the subpoenas of this commission, he was found guilty, in July, of obstructing the prerogatives of investigation of Congress.

The prosecutors then requested six months of detention, pinning his “contempt » and his « bad faith » throughout the procedure. His lawyers had asked for parole or house arrest.

Judge Carl Nichols ultimately opted for four months in jail, plus a $6,500 fine.

“Respecting Congress is an important component of our constitutional system”, he justified, pointing out that Steve Bannon had, to date, always produced “no document, nor delivered any testimony” to the commission.< /p>

A fierce critic of the establishment, Steve Bannon, who has been an investment banker and director of the radical right-wing news site Breitbart, is considered one of the architects of Donald Trump's victory in 2016. < /p>

Become one of the president's powerful advisers, he was ousted from the White House in August 2017 after far-right violence in Charlottesville, Virginia.

But he had remained close to the Republican billionaire and had exchanged with him again on January 5, 2021, on the eve of the attack on the headquarters of Congress. After their conversation, he predicted an onslaught of “all hell” the next day in Washington.

To find out the content of their discussions, the parliamentary commission of inquiry had summoned Steve Bannon to testify and produce documents.

He had refused, invoking the right of presidents and members of the executive to keep certain conversations secret.

But Donald Trump has not invoked this right and Steve Bannon, who “was a private citizen on January 6th”, cannot avail himself of it, pointed out the Judge Nichols.

During his trial in July, Steve Bannon produced no witnesses and did not speak. The jurors declared him guilty after less than three hours of deliberations.

Steve Bannon is also being prosecuted for fraud by the New York justice as part of an investigation into a fundraiser to build a wall between the United States and Mexico, one of Donald Trump's main campaign promises.

He had already been implicated in this case by federal justice, before being pardoned by Donald Trump in the last days of his presidency.

The former president himself is the subject of several investigations and the commission on January 6 announced that it was going to subpoena him.

Its members, seven Democrats and two Republicans, are due to release a report on their work by the end of the year, in which they could advocate indicting the former president. The decision will ultimately rest with the Minister of Justice Merrick Garland, a prudent man who does not exclude anything.