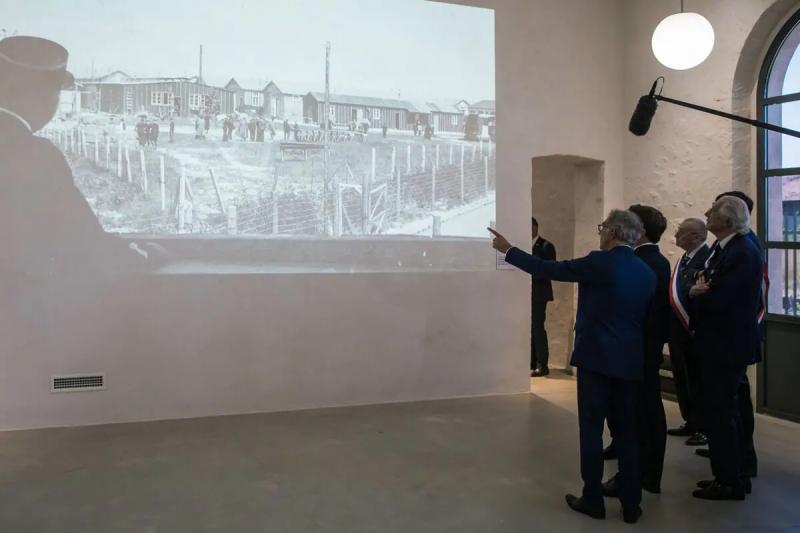 French President Emmanuel Macron urged Sunday to “redouble our vigilance” in the face of “still alive” anti-Semitism, as part of the 80th anniversary of the Vel d'Hiv roundup, during which were deported thousands of Jews by the Vichy government.

“Eight decades ago, Vichy France [which collaborated with the Nazi occupier, editor’s note] betrayed its children by delivering thousands of them to their executioners. It is France's duty, to be true to itself, to recognize this and not to give in to this contemporary fight against anti-Semitism,” Macron said, visiting a new place of memory. of the Holocaust with four ministers.

He called on “the republican forces of our country” to “redouble their vigilance”.

8,160 of them, including the old and sick, were first taken to the Vélodrome d'Hiver stadium, known as Vel d'Hiv, in the 15th arrondissement of Paris.

Emmanuel Macron's speech is in line with that delivered in 1995 by President Jacques Chirac, who made an impression by recognizing – the first after 50 years of silence from the French authorities – France's full responsibility in the Vel d'Hiv roundup, in which no German soldier had taken part.

In July 2012, President François Hollande went further: “This crime was committed in France, by the France,” he said.

Mr. Macron inaugurated a museum on Sunday in the former station of Pithiviers (center), from which 8,100 Jews, including 4,400 children, had left for the concentration and extermination camp of Auschwitz-Birkenau. Only a few dozen of them have returned.

“No offense to some, this station testifies to the deep and inhuman anti-Semitism of the French State”, which “has made available Germans its police, its gendarmerie, its trains…”, underlined Éric de Rotschild, the president of the Mémorial de la Shoah, responsible for the site.

Today, anti-Semitism “can take on other faces, wrap itself in other words, other caricatures,” said Emmanuel Macron. “But the odious anti-Semitism is there, it prowls, still alive”, he continued, evoking in turn the “terrorist barbarism”, the “assassinations and crimes”, the resurgences on “social networks” or the “desecration of graves”.

“He interferes in debates on television sets. It plays on the complacency of certain political forces. It also thrives around a new form of historical revisionism, even denial,” he insisted, alluding, without naming him, to the far-right candidate in the last presidential election Eric Zemmour, who had notably supported that Marshal Pétain, head of the Vichy regime, “saved” French Jews during World War II.

“It's a falsification of history,” replied the head of state. “Those who indulge in these lies are planning to destroy the Republic and the unity of the nation,” he castigated.

He was speaking to an audience of personalities from the Jewish community and elected officials, including two new deputies from the National Rally (extreme right). One of them, Thomas Ménagé, considered that “the question of the State's responsibility as such” in the Vel d'Hiv roundup was not “challenged”, even if the leader of his party, Marine Le Pen, had made the opposite remarks in 2017.

It is important to teach this period of history “so that young people know it and have a critical mind” , underlined Serge Klarsfeld, the president of the association Sons and daughters of Jewish deportees from France.

While the number of Holocaust witnesses still alive is inexorably reduced, the priority of the museum of the station de Pithiviers is to welcome school children by showing them films and images, in particular portraits of the victims.