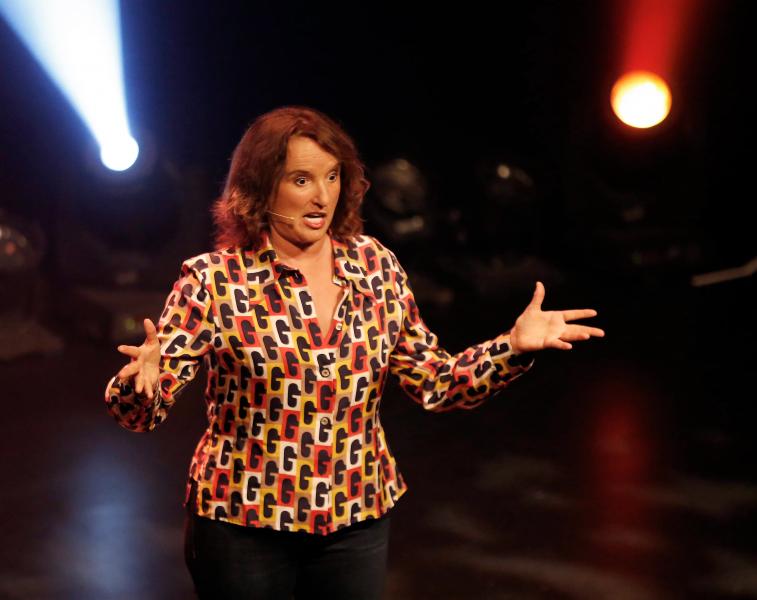 With all the panoply of comedians that can be seen regularly in Quebec, it is sometimes good to taste what is done elsewhere. Anne Roumanoff landed at the Théâtre Petit Champlain with a show of humor, well-honed, diversified and very pleasant.

In Quebec, on the occasion of ComediHa! Fest, the French comedian offered, on Tuesday, the first of two performances of his show Everything is almost finewhich she has been walking since 2020. An evening without sacredness, without vulgarity and delivered with a nice look.

The tone was set from the start when her pre-recorded voice asked the public to pick up their phone and to press the power off button.

“Not on airplane mode”, she specified, before showing up on stage wearing a printed shirt, jeans, red shoes and a superb smile.

After an introduction where she referenced COVID, Ukraine, monkeypox, Emmanuel Macron, Trudeau's seventh birthday, and ridiculed the conspiracy organized by international elites, she addressed women's celibacy in 50 years old.

She was amusing when she launched into a “rap” about the freedom regained by these women, of which she is a part, then tampering with the air of L' amour is a rebellious birde from the opera Carmen to define, with new lyrics, those who seek love on the internet.

“A man says he's epicurean on a dating site, he's an alcoholic man,” she pointed out.

She clarified that the cliché phrase “One lost, ten found” , which is always launched following breakups, only works on the pounds.

The comedian offered a fun segment when she transformed into a clairvoyant by making Claude, an audience member, ride , on the scene. A beautiful moment…

In the small performance hall of Petit Champlain, we feel the 56-year-old comedian, originally from Paris, totally at ease. We feel it close to the public. A proximity that promotes intimacy and experience.

The texts are of high quality and stand out, as during a segment where she skilfully juggles the names of fruits and vegetables while thinking of romantic encounters unlikely in supermarkets.

Anne Roumanoff is also right in an issue where she addresses the communication problems between a computer and a printer that arise at the wrong times, just like the ink cartridges that always empty when needed. She will also offer a whole new definition of the term LGBT.

At the end of the performance, she alludes to the brother-in-law who wanted to see a Ukrainian refugee by the name of Irina arrive at his home. . He was instead entitled to Olga, his grandmother.

The comedian imagines what a meeting between Jean-Luc Mélenchon could have been like, if he had been elected, and Vladimir Poutine.

“He would have screamed and it would have been dangerous. Annoyed, Vladimir Putin would have pressed the button,” she said.

Justin Trudeau, according to Anne Roumanoff, resembles the President of the French Republic Emmanuel Macron.

“ He doesn't do anything, but he does it very well,” she said, provoking a burst of laughter.