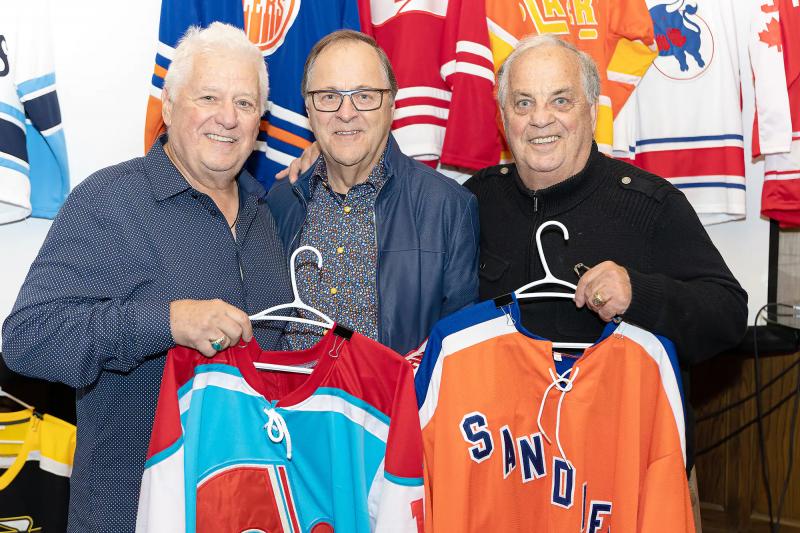 A 50th birthday is a big party! This is the case for the Nordiques and other former AMH players, who reconnected with emotion last night in Quebec. “A playing career is short, but friends remain for life,” former captain Marc Tardif aptly pointed out.

Throughout the weekend, approximately 80 players who have passed through the World Hockey Association (WHA), from its creation in 1972 until its merger with the NHL in 1979, converge on the Château Frontenac to make relive memories over a drink or two.

Jean-Claude Garneau and Phil Pritchard with the Avco Cup, which was awarded to the WHA champion club.

It was enough to see the many alumni hugging each other, laughing out loud, toasting or drinking anecdotes to realize how the years had passed and that they were overjoyed to make up for lost time.

“It's amazing to see all these people. When I was younger, I saw people organizing reunions and I didn't understand. I thought to myself that it would never happen to me to participate in that. Finally, we see each other again and from the first minutes, it's incredible,” exclaimed Tardif.

For the one who has lived in Quebec since the end of his brilliant career with the Nordiques, the road was short.

For many others, who came from all over North America, it was a unique opportunity not to be missed.

“It was 91 [32 degrees Celsius] when I left San Diego. I've been freezing ever since I arrived! » joked Michel Rouleau, who has lived in California since his time with the San Diego Mariners, after his first three seasons with the Nordiques.

Originally from Outaouais, Rouleau was involved in one of the most significant trades in the history of the team, when he was sent to Michigan with Pierre Guité and Alain Caron, against Marc Tardif.

“No one ever realized what a good player I was to get traded for Tardif. I came here to clear things up,” he joked.

Ex-goalkeeper Richard Brodeur is another who has racked up milesaerial, he who landed from Vancouver to celebrate with his former accomplices.

“It's so special to see friends I haven't seen in 40 or 45 years! We were rebels when we jumped into the WHA. We've been telling each other stories for a while and there are plenty of others that come back to us,” he smiled.

If several were replaced at first sight, others needed to refresh their memories, like when you meet an old friend from elementary school at the grocery store.

The weekend honorary president and author of the first goal in the history of the Nordiques, François Lacombe.

This was the case for André Lacroix, the greatest scorer in the history of the WHA, who lives in Cleveland.

“There are people here that I haven't seen in 40 years, because I live in the United States. Everyone ages. Back then, some had mustaches and now they don't! Some have gray hair, others don't. »

« When I introduce myself, I tell them that I am André Lacroix and I wait for them to introduce themselves. . Because it's been so long! ” he launched.

The goalkeeper Jacques Lemelin, who was from the first edition of the Nordiques, in 1972, did not take long to notice that despite all the pleasure in finding old teammates, time has done its work.

“I was looking at the freshman team photo and there are at least 10 people in it who died. Time has passed… “, he said.

Today, several conferences are planned, in particular on the foundation of the circuit and on the conquest of the Avco Cup by the Nordiques, in 1977.

A visit from Bobby Hull

The highlight will undoubtedly be the presence of the former star striker Bobby Hull, who left the Chicago Blackhawks to join the Winnipeg Jets.

He quickly became the WHA's biggest catch and will be joined by his Swedish mates from the “Hot Line”, Ulf Nilsson and Anders Hedberg.

“We have to do it, get everyone together! Guys come from all over. We have so many things to tell each other,” rejoiced former defender François Lacombe, who acts as honorary president of the event organized by the National Capital Sports History Society.