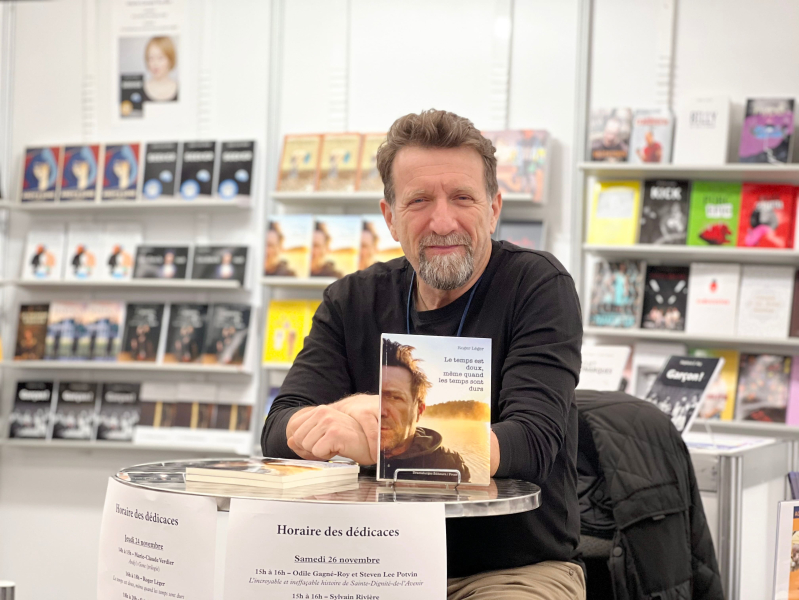 At 63, actor Roger Léger celebrates his 40-year career this year. If he knew he was able to write, the interpreter of the wicked Elijah Chapados in The Honorable 2 slightly doubted he could become an author. Yet that is what he did by publishing The weather is sweet, even when times are hard. He is present at the Montreal Book Fair this weekend.

Social networks are sometimes good. Especially in the case of Time is sweet, even when times are hard, which would not have existed otherwise.

It is that the actor Roger Léger, during the pandemic which left him idle in particular, gave himself the challenge of delivering, every two days, his moods, his thoughts and his memories in small texts that he shared on Facebook. Suddenly surprising his close friends who did not suspect that the actor could write with this kind of breath, then who strongly encouraged him to publish.

Try the experience of writing

“I said to myself: maybe I can participate in a change”, explains the actor, who realized that he no longer wanted to argue aimlessly with people online.

“Give meaning to what I write. I asked myself: why don't I just put my hand in this universe? Say: I am going to give you a part of me, of my life. Little things you can't see. These little things that are part of a big patent too. »

It was the publisher and poet Yvan Bienvenue who had the great idea – and the flair – to publish this collection of texts by Roger Léger. He wrote to her, he believed it.

The actor wanted to wait a year to continue writing and take the time to think about all this. Then, after a year, he agreed to dive into the adventure. After regrouping, correcting and slightly modifying certain texts, the book was ready to be published.

This book is about memories of childhood, perceptions of the childhood of the actor who could be seen playing in the popular and defunct series District 31and L'auberge du chien noir , as well as current hot topics (such as Indigenous children and feminicides).

“It's between a logbook, poetry, reflections on events and travel chronicles,” explains the writer, who kept the dates and times of his Facebook posts. This is me explaining how I feel, talking about death and dying through time. »

In addition to his upcoming writing projects, Roger Léger will be in the cast of the play Les Plouffe at the Denise-Pelletier Theater in 2023. We will see him next fall in The candidate, the new comedy by Isabelle Langlois (Rumors, Bad Karma and Letting Go). The series will star Catherine Chabot as a nail technician who will be thrown into the political arena.

Several authors and musicians meet in a cabaret of curiosity where they deliver snippets of stories from all kinds that make them vibrate. 7 p.m. at the agora

The master of horror will tell his story at the host Sonia Sarfati. In particular, his latest novel, Résonance, will be discussed. 5:45 p.m. at the Literary Space