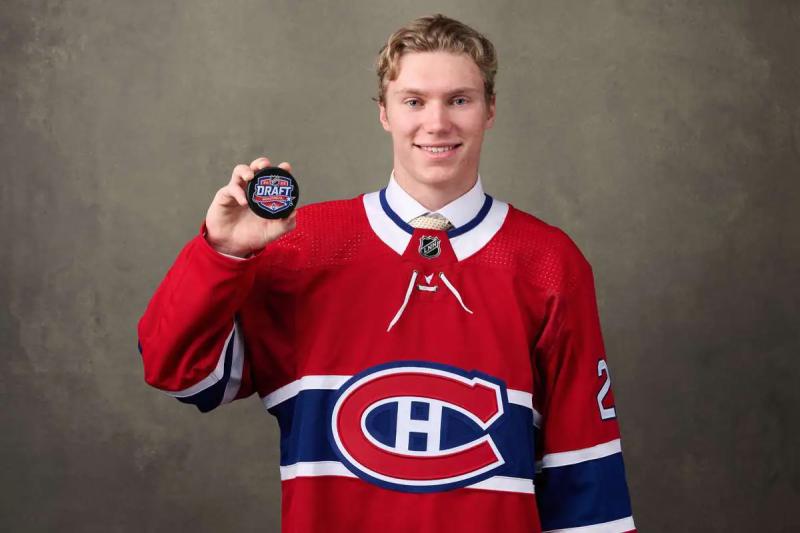 Martin St-Louis said it with humor on Thursday evening on the floor of the Bell Centre. He needed to wait 47 years before experiencing the frenzy of an NHL Draft for the first time.

St-Louis also offered a message of encouragement to the players present in the stands of the Bell Center by telling them that a draft represented a first step in a career, but that it did not symbolize the end in the event of a failure. < /p>

Listed as the tenth brightest prospect in North America, Owen Beck was likely to hear his name on the first day of the draft. But Beck did not experience this feeling.

First choice of the second round, Owen Beck wasted no time in getting to the Canadiens' table to receive his jersey.

Thursday night, the Mississauga Steelheads center did not have the pleasure of leaving with a new jersey and a new cap. Skipped by the 32 teams in the first round, Beck became the No. 1 pick on Day 2 of the draft.

“I was a little upset when I left the Bell Center on Thursday night. But I knew that if it wasn't in the first round, it was to be in the next round. I didn't have to wait too long. It was a good feeling. »

In Beck, the CH got their hands on a center that is described as very responsible, good at the circle of face-offs and intelligent, as much on a school bench as on an ice rink. He had 51 points (21 goals, 30 assists) in 68 games last year at Mississauga.

At 5'8″ and 158 lbs, Lane Hutson doesn't have the typical profile of a defenseman. The American would do well to hide a few rocks in his pockets during the traditional weigh-in for medical examinations before a draft. But Hutson has always sought to combat the prejudice of the undersized player.

Under the gaze of Jeff Gorton, the president of the Canadiens, Geoff Molson, warmly welcomed defender Lane Hutson.

The CH drafted him with their second pick in the second round, the 62nd selection overall.

“I couldn't be happier, I just got drafted by a team with a great story, Hutson said. I know I will have to fill this sweater a little more to get to the next level. But on the ice, we all become the same size. »

Known for his mobility and his sense of play, Hutson would be a defender in the mold of Torey Krug, of the St. Louis Blues.

“Yes, I like that comparison, he he retorted. Krug is a competitive guy in all three zones. He succeeds in plays that very few players can succeed. He is a very good player. I have always loved Krug. It was natural for me to watch a defender like him. Over the past few years, I have also followed Adam Fox. He reads the game so well.”

The son of a tennis player

In the third round, the Canadian chose center Vinzenz Rohrer. Originally from Austria, he moved to North America to play with the Ottawa 67's.

Vinzenz Rohrer met with the general manager of the Canadiens, Kent Hughes, after being called in the third round.

Rohrer followed in the footsteps of his good friend Marco Rossi, a former 67's star and 2020 Minnesota Wild first-round pick. In his first season in the OHL, the Austrian had a fairly easy adjustment with 48 points (25 goals, 23 assists) in 64 games.

In his meetings with the CH, Rohrer experienced something rare.

“In Buffalo for the combination, I found myself in a room where there were ping-pong tables after my meeting with the leaders of the Canadian. I played five games, I won against five different people. »

Rohrer also has talent with a racket in his hand. His father, Stefan Lochbihler, is a former ATP tennis player.