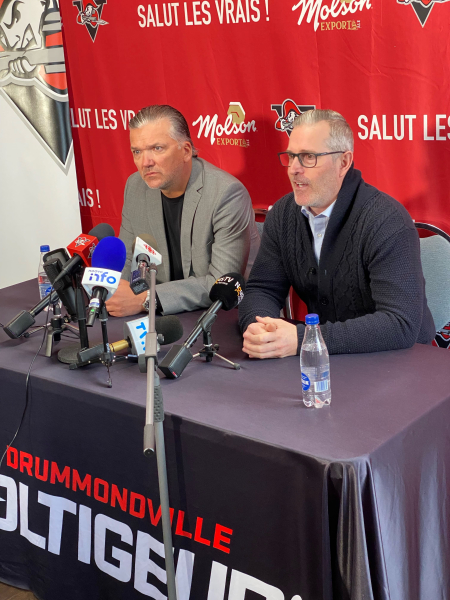 Éric Bélanger had been considering his future with the Trois-Rivières Lions for some time and the dismissal of Steve Hartley by the Drummondville Voltigeurs of his longtime friend Philippe Boucher, on November 16, was which convinced him to resign from his former position.

Bélanger made no secret of it, Thursday, during the press conference organized by the Voltigeurs to present the organization's new head coach: he was reflecting on his future with the Lions for some time.

“I had matured a lot of things in my head since the beginning of the year. We had not had an easy start to the season and when this opportunity arose, I felt ready to take it, ”he mentioned.

Besides, Bélanger wanted to make one thing clear: he is not the reason for the dismissal of Steve Hartley. It was only after Philippe Boucher's decision was announced that Bélanger contacted his longtime friend, with whom he played with the Los Angeles Kings from 2000 to 2002.

A Once the first contact was established, Bélanger had a decision to make: if he wanted to be part of the hiring process, he had to resign from his position with the Lions.

“I was ready to take this risk to get to the end of the process, even if it didn't get me here today. »

If he clarified it in front of the media on Thursday, Bélanger also wanted to do it with Steve Hartley's father, Bob, whom he considers a mentor.

“I wanted Bob be aware that Phil didn't kick Steve out to hire me. I wanted to make that clear and that it was important for me to tell Bob that things were done in the right order and in the right way. He was fine with that and I know I can call Bob anytime for advice. »

For his part, Philippe Boucher claims to have received “a lot of CVs” for the vacant position. However, when Bélanger's interest became clear and he agreed to leave his position with the Lions, the choice became clear to him.

“When Eric raised his hand, I think it was a perfect match because I know him as a friend, as a former teammate, as a guy who worked hard to have a career in hockey and as a guy who won't be beige behind the bench, who will know how to get his message across and I think the players will feel it. »

Bélanger has signed a three-year contract, including the current one, so he is attached to the Voltigeurs until, at the very least, the end of the 2024-2025 season .

Not cold with Marc-André Bergeron

Even if his decision came as a surprise, Éric Bélanger claims not to have left the Trois-Rivières Lions in cold with its general manager Marc-André Bergeron.

The latter mentioned in a recent interview with Le Nouvelliste having noticed that Bélanger “did not seem on his plate” in recent weeks.

“Was our relationship perfect? No, explained the new head coach of the Voltigeurs. Not having a contract extension bothered me because stability is important for a coach. In addition, the junior was an avenue that interested me for a long time. So I was fine in my head. We didn't have the start to the season we wanted and there was frustration, yes. On the other hand, we had replaced the team for ten days. There is no cold between Marc-André and me. It's my decision, I assume it and I look forward. »

Speaking of stability, it was not just at the contractual level that Bélanger had difficulty finding it in Trois-Rivières. The many staff movements, typical at ECHL, made his work complicated. However, he only gets something positive out of it.

“Last year, 86 players came to our roster. I can adapt to anything and there is not much that scares me anymore. I only take positive things from this experience. […] A season in the ECHL is hard, because of the travel and the number of games. I'm a much better trainer.

“There is a lot of personnel movement in this league and stability was part of my decision. I will be able to work with a group of players for a few years. »

Bélanger still wanted to explain his decision to his former players.

“I spoke to several players who contacted me and explained my decision to them. They understood it even though it went a bit out of left field. I loved my group and I have a lot of respect for a lot of veterans who were there last year and who were back this year. Just that they call me, it means I did the right things.

What also motivates Bélanger in his new challenge is that he will be managing players whose dream of a career in the NHL is still very much alive.

“I was in the shoes of these players who have this dream of playing in the NHL. It's their motivation. I take nothing away from the ECHL players but in the juniors, the goal of reaching the NHL is even more brilliant. I now want to pass on my knowledge to them. »