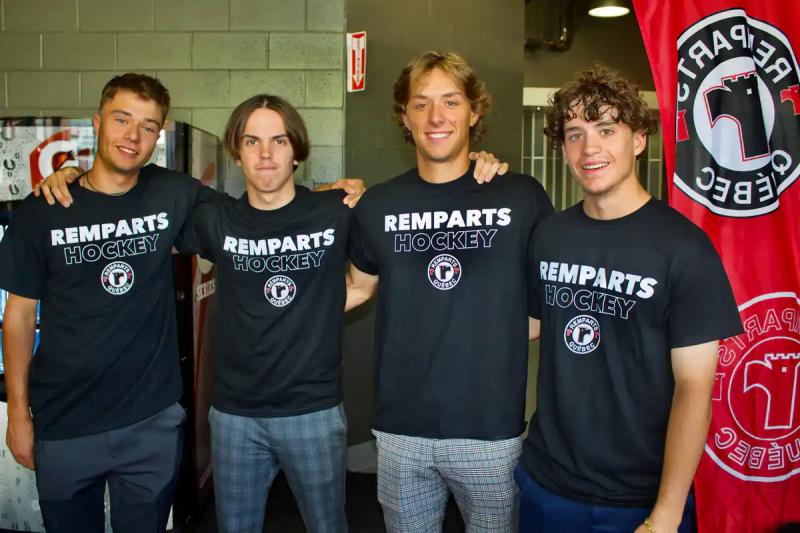 Some young people are likely to connect more quickly than others on the Youth Pavilion ice rink, by Friday, at the Quebec Remparts rookie camp, since four hopefuls have been on the same team for the pee-wee ranks, in Gatineau.

The Remparts selected defensemen Vincent Murray and Brady Austin in the fourth round , before selecting forwards Marek Legault and Samuel Fontaine in the sixth and eighth rounds.

“We've all been on the same team since the pee-wee level,” said Samuel Fontaine. We grew up together. We made friends. I played on the same line as Marek Legault for four years. It's fun to be together at the Remparts.”

The products of Les Intrépides are lucky to live this experience with their group of friends.

“We are not arriving in the unknown, said Marek Legault who considers himself capable of disturbing his opponents as Brad Marchand of the Boston Bruins can do. We can refer to our friends for help. We will give everything not to give the organization a choice.”

The future lies in the Outaouais region

The quartet wants to sure to see the future of Quebec go through the athletes of the Outaouais.

“We want to show our skills for this year and for the future, noted Brady Austin. They will need a replacement next year. […] We are always the four together. It's fun if it can continue for a few years.”

“Quebec is a dream team, added the one who describes himself as a defensive-style back. It's nice to have the experience of a team going there for the cup.”

The week-long stopover for rookie camp is a long-term investment, they say.< /p>

“We are coming to camp, not just for this season, but for the future, continued Samuel Fontaine.”

Quebec is counting on the feedback of more than twenty veterans . When rookie camp opened on Monday, head coach Patrick Roy said there's no room for offense, but a defenseman could manage to carve out a place. However, he mentioned that he will not close the door to a prospect who will force his hand.

Until Friday, 30 players will participate in the Remparts rookie camp. Among them, only about ten will be able to receive their ticket for the 26th training camp in the history of the Remparts, which will begin the next day.