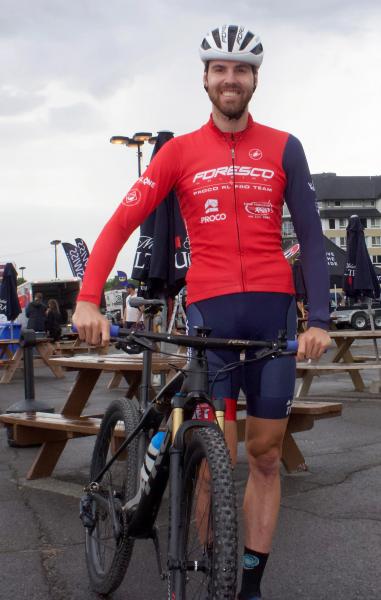 Léandre Bouchard will cycle across Canada from Vancouver to Alma starting Tuesday to raise funds and promote suicide prevention.

The Rio 2016 Olympian in mountain biking has been hit twice rather than once by the devastation caused by the suicide of a loved one. Aged 17, Bouchard had the pain of losing his younger sister who took her own life in 2009. The following year, his mother made the same gesture.

“They will be with me during my crossing of Canada,” said Bouchard. This is the first time I have spoken about it publicly and I was dreading the day when I was going to open up on the subject. I hope it will be well received. I hope to contribute to breaking the taboos surrounding suicide and its prevention. I speak publicly to save lives. »

“As an athlete, I hope to join men for whom it is more difficult to open up about the difficulties they are experiencing, continues the 2021 Canadian champion. I want to give visibility to this cause that is close to my heart. »

Sport has been a lifeline for the 29-year-old Alma athlete. “I had some tough times,” he said. I was finishing my adolescence and I was beginning my life as a young adult. Sport helped me get through these difficult times. If we talk about suicide prevention, it will save lives. »

In autonomy with his tent

The rider of the Foresco Holding Proco RL training has some experience of cycling tours, but he will live his biggest challenge by pedaling 5200 kilometers in total autonomy.

“I have already done a few cycle tourists and I am hopeful of crossing the distance, but I also know that I will encounter adversity, he summarized. I did Las Vegas to the Grand Canyon and another from Vegas to California. During COVID-19, in the summer of 2020, I toured Gaspésie. »

« I will do my crossing independently, adds Bouchard. I will be alone with my tent. I also plan to sleep over with friends on occasion. »

Bouchard plans to return to Alma in mid-October. “I hope to maintain an average of 200 kilometers per day,” he said. It's a big physical load, even for an athlete. I want to complete the crossing in 24 to 30 days. I give myself a few playing days in case I have to take a day off here and there.

Bouchard had been thinking about taking on this challenge for a while. “The season ended earlier than usual and I completed my studies, explained the bachelor in Physical Education and Health at UQAC. Once I decided to go for it, all I had to do was find a cause that was close to my heart. It will serve as my motivation.

Bouchard has no financial goals in mind.

“I don't have a specific goal. Yes, there are donations, but I also want to publicize the resources available for people who have suicidal thoughts, people who are grieving and people who are worried about a loved one. It is more difficult to know the number of people you have reached. »

Victim of a serious fall during a training run on April 8, an hour before the World Cup in Petropolis, Brazil, Bouchard was sidelined for almost two months. Healing for his five fractured ribs, two dislocated ligaments and his pneumothorax took longer than expected.

“It feels good to end the season with such a project. I had some ups and downs this season and my results were below my expectations. My injury bothered me longer than I thought. I will start again on a new basis next year. My goal is still to make it to at least the 2024 Olympics in Paris. »

It is possible to make a donation to the Suicide Prevention Center 02 Saguenay–Lac-Saint-Jean/Chibougamau-Chapais by using the following link: https://www.zeffy.com/fr -CA/donation-form/742bb9c7-16d4-4c9b-bdbd-03aedd6086d2-

It is also possible to contact the telephone intervention line at 1866-APPELLE or the line digital intervention program Suicide.ca