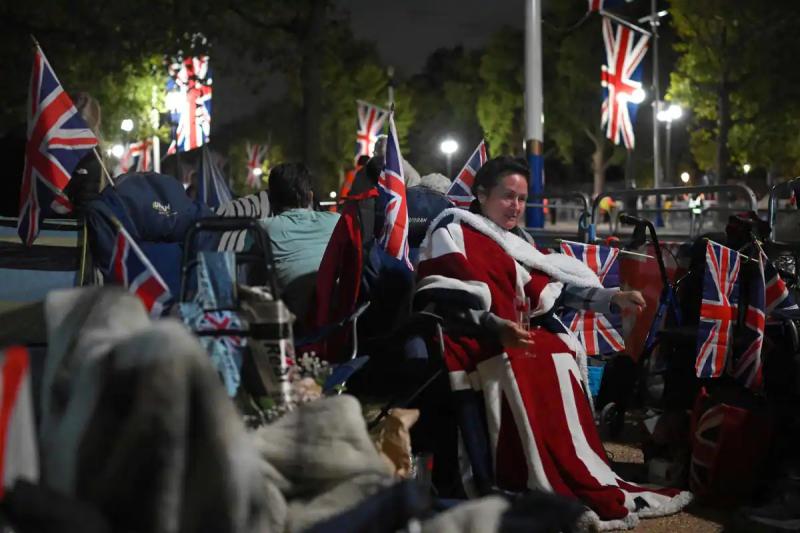 To experience “a piece of history” or to be able to say “I was there”: Many Britons and tourists who sometimes came from afar got up at dawn on Monday to attend the London funeral of Elizabeth II in the best seats.

Despite the cool morning temperatures in the British capital, spectators gathered before 7 a.m. in the vicinity of Buckingham Palace and the Westminster Abbey, where the religious ceremony takes place.

“I wanted to be part (of the celebrations). It's a great day in our history, it's part of our life,” said Susan Davies, 53, who arrived at 6:30 a.m. at Hyde Park Corner from Essex, east London, with her son. husband and their two teenagers.

Equipped with a chair and “a lot of food”, she hopes to see the coffin of the queen who must at this place, after the ceremony and a procession from the abbey, be transferred by hearse to Windsor Castle.

“I want to be part of history,” says Jack, his 14-year-old son, who already plans to tell the event to future generations. “I will tell my children about this moment. I'll tell them: “I was there!”

Further afield, Calob Thompson, a 20-year-old film student who lives in Bedford, north London, plans to watch the funeral live on his phone, but he wanted to see “the coffin and the royal family” go by. so he arrived at 6am.

“We wanted to be in the front row. We thought we were in the middle of the crowd, but here we are, in the best place, with the best view. Fantastic!” he exclaims, describing an atmosphere “quite exciting, but also dark”.

Some are already sitting in the grass of Hyde Park, on blankets laid directly on the floor or camping chairs, ready to follow the ceremony on a giant screen.

The first subways that arrive in the surrounding stations are crowded. Some have simply spent the night there: many sleeping bags are strewn on the ground of Whitehall, a thoroughfare in central London which usually hosts ministers and senior civil servants.

Bethany Beardmore, a 26-year-old accountant, has arrived from 9 p.m. Sunday evening. “It was cold, we didn't sleep,” he says, saying he was holding on thanks to a lot of sugar and caffeine. “There was such an atmosphere (…) everyone was chatting”.

“A touch of color”

On Whitehall, but also along the Mall, the wide avenue that leads to Buckingham Palace, young and old take their troubles patiently. Union Jacks, but also Australian or Canadian flags were hung. The best prepared have breakfast and coffee. The best viewpoints are already occupied.

In Windsor too, where Queen Elizabeth's coffin will arrive only in the afternoon, spectators were already beginning to gather around the “Long Walk”, a straight path that leads to the castle and where the procession will pass. Giant screens have been installed.

Dawn Bell, 56, came from Kent (south-east). The Queen “has been absolutely fantastic throughout her reign. The least we can do is get up early and come say goodbye,” she says, dressed all in black alongside Daisy, her 26-year-old daughter, who has chosen to wear pink sweater and joggers, because “the Queen loved a good splash of color.”

Elizabeth Turner, 60, came from British Columbia, on the west coast of Canada. 'It was important for me to be here to pay my respects to the Queen, as she is much loved even there.'

Henry and Lauren Bainbridge, both 29, came from the nearby town of Maidenhead 'to pay our respects to our Queen, who ruled the country for over 70 years'. They didn't forget the umbrella, because “with UK weather you never know what's going to happen.”