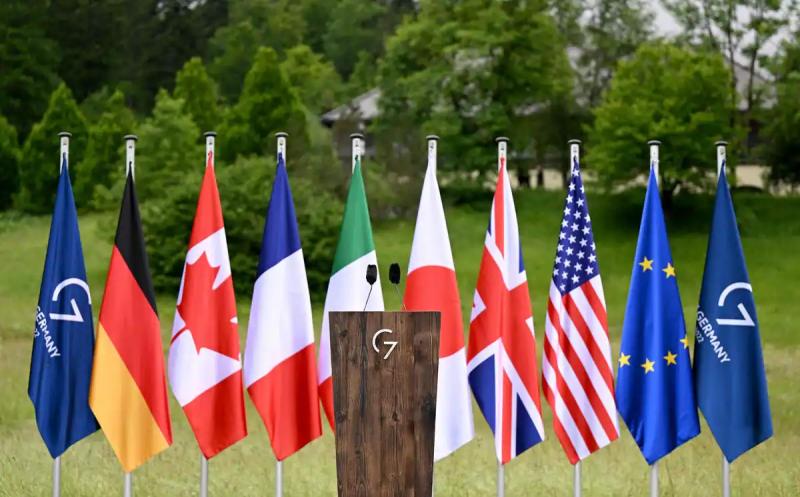 Dealing another blow to Moscow's energy windfall: the G7 countries decided on Friday to “urgently” cap the price of Russian oil, a complex mechanism to put in place.

A “broad coalition” of countries is called upon to implement the decision, finalized on Friday at a virtual summit of finance ministers from the seven most industrialized countries.

Russia for its part, even before its formalization, denounced a “completely absurd” measure.

Necessary unanimity of the EU

Such “interference” in the oil market “will only destabilize the oil industry, the oil market. And for this, European and American consumers will be the first to pay,” threatened Russian Deputy Prime Minister Alexander Novak, quoted by Russian news agencies.

France, a member of the G7, has also tempered the enthusiasm of its partners.

“The technical work is still ongoing and for us it is clear that no final decision can be taken before having consulted and obtained a unanimous opinion among the 27 Member States of the European Union”, indicated the French Ministry of the Economy.

The EU aims to obtain this agreement “in accordance with the timetable agreed in the context of the sixth EU sanctions package” against Russia, explained the European Commissioner for the Economy Paolo Gentiloni, i.e. on December 5 for crude oil sales and February 5, 2023 for petroleum products.

The capping mechanism promises to be complex.

“The price cap will be set at a level based on a series of technical data and will be decided by the entire coalition before its implementation”, write the seven countries – United States, Germany, Canada, Great Britain, Italy, Japan and France.

Concretely, Russia would sell its oil to these countries at a lower price than the one at which it sells it today, but which would remain higher than the production price, so that it has an economic interest in continuing to sell it to them, and so that it does not cut its deliveries.

The challenge is to rally as many countries as possible, because the price cap will only work if all the major buyer countries participate, underline the experts, who point in particular to the role of China and India.

To this end, the G7 “invites all countries to give their opinion on the design of the price cap and to implement this important measure”, in order to establish “a broad coalition” to maximize the effect of the measure. .

The G20 summit, meeting in Bali on November 15 and 16, should therefore be a crucial meeting of the implementation of this coalition.

The leaders of the G7 countries, under the impetus of Washington, launched work at the end of June aimed at developing the mechanisms for this cap, which should be based on a ban on insurers and reinsurers from covering the maritime transport of Russian oil.

Such a mechanism should have real effects on the Russian economy, believes Ms. Yellen. “We have already started to see the impact of the price cap through Russia's hasty attempts to broker bilateral oil swaps at massive discounts,” the Treasury Secretary said.

This cap should deal a new blow to the Russian economy, already “plunging into a deep recession”, welcomes the British Chancellor of the Exchequer, Nadhim Zahawi.

The measure, however, risks having collateral effects on the global economy, warns the think-tank Capital Economics.

The mechanism “could further drive up global energy prices”, it warns in a note, stressing however that “the cap could also be effective in reducing tax revenue for the Russian government”.