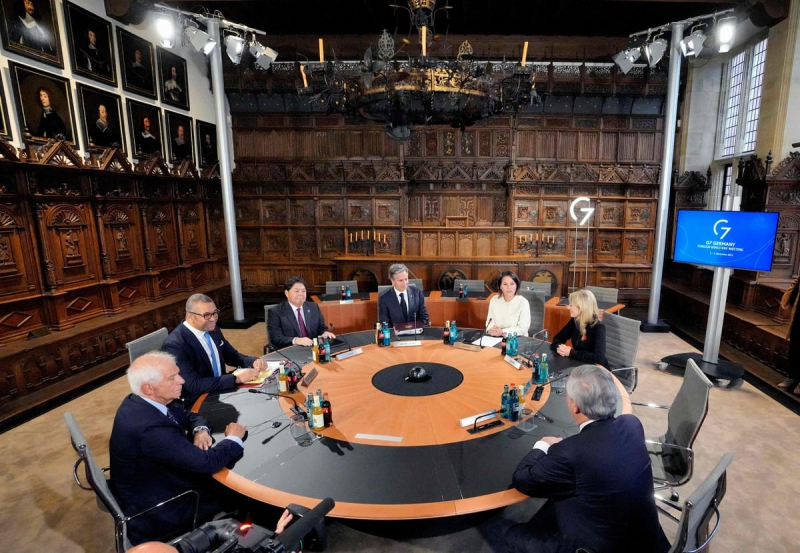 Ukraine can count on increased support from its Western allies to face the winter, G7 members who want to prevent Russia from “starving” the country and plunging its population promised on Thursday “in darkness” and cold.

“We will not allow the brutality of this war to lead to the mass death of elderly people and children, young people or families in the coming winter months,” German Foreign Minister Annalena Baerbock said on Thursday. at the opening of a G7 meeting in Münster, western Germany.

The head of European diplomacy, Josep Borrell, accused Vladimir Putin of “waiting for General winter is coming to support the Russian army”.

“They bomb, they destroy the civilian infrastructure of millions of Ukrainians who no longer have access to electricity. What Putin is ready to do is to plunge the country into darkness,” he lamented.

Faced with the intensification of Russian strikes on civilian equipment, the group of seven industrialized countries, which meets until Friday, will coordinate its aid to deliver “water pumps, heaters, living and sanitary containers, beds, blankets, tents”, Ms Baerbock said.

Ms. Baerbock, whose country holds the presidency of the G7 until the end of the year, denounced the “treacherous methods” of Russia in its way of waging the war.

Many Ukrainian cities , including the capital Kyiv, have suffered bombardments in recent weeks that particularly target civilian equipment, causing water and electricity cuts.

Europeans and Americans are already providing massive economic and military aid to Kyiv since the beginning of the Russian offensive on February 24.

Another international meeting of support for Ukraine will take place on December 13 in Paris, recalled the head of French diplomacy Catherine Colonna.

The Ukrainian Foreign Minister Dmytro Kuleba must intervene by videoconference during this meeting in Münster, according to diplomatic sources.

“This G7 ministerial comes at an important time for us,” a senior US diplomat told reporters, stressing that the group is “vital in creating coordination mechanisms” for the international community's response to crises in course, from the war in Ukraine to North Korea.

In this regard, Ms. Baerbock, as president of the G7, declared that she “strongly” condemned the new ballistic missile launch carried out on Thursday by Pyongyang , the day after a record salvo of shootings which raised the tension in the region to its height.

The meeting, under German presidency before Japan took over in January, also comes against the backdrop of changes in government in Italy and the United Kingdom in particular, causing another American diplomat to say on condition of anonymity that he was necessary to make sure everyone is on the same page.

The energy crisis in Europe as winter approaches and the situation in Iran, rocked by bloody protests and violently repressed, are also at the center of the discussions.

The American and German ministers jointly launched strong support for the protests in Iran.

“Among the things we are working to do together is to ensure that Iranians have the ability to communicate with each other and with the world at home. outside,” explained Antony Blinken, emphasizing the “technological” support provided by the United States to the demonstrators.

Relations with Beijing will be discussed during a working dinner, in the context of the German Chancellor Olaf Scholz's controversial visit to China on Friday. The latter promised on Wednesday not to “ignore controversies” with Beijing during this trip.

The G7 countries are ready to consider China not only as a “partner” but as a “competitor” and a “rival”, Ms. Baerbock said in this regard.

The G7 brings together the United States, Canada, Japan, France, Great Britain, the 'Italy and Germany.