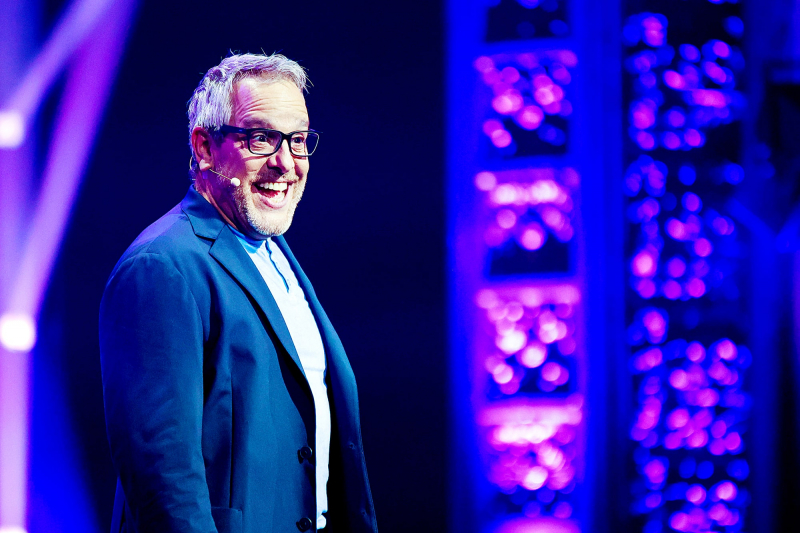 Six years after swearing never to go back on stage again, the one and only Michel Courtemanche returned to the stage on Friday, for the first Gala of the 2022 edition of ComediHa! Feast. And he did it like he never stopped.

To add one more tick, it had been 30 years since he had hosted a gala. And that too, he did it like a great man.

Courtemanche was in control with a style that is his, with his gestures and it was good to see him on scene.

Prior to his arrival, when the lights went out, the audience that had filled the Capitol to capacity began chanting “Michel, Michel, Michel”. Jacket, sneakers, dark glasses and graying hair, people stood up to applaud him.

Michel Courtemanche did not miss his shot for his return to the boards during the ComediHa! Feast.

“I am 57 years old. Felt 93. It's been a long time, huh? A lot has happened in 30 years,” he said, before speaking about the genderless Mr. Potato Head and the violence that we want to remove from cartoons, specifying that ”  cartoons ”, that was not true.

“It's as if I had asked, when I was an alcoholic and polydrug addict, to close the SAQ and the SQDC,” he said.

Jean-François Mercier came to join him on the stage to tell him that he had come to see his gala because he was convinced that he was going to go beyond the limits, to give him a Will Smith slap.

Exhausted and challenged by Mercier, Courtemanche decided to let go and say, cursingly, what he wanted to say.

“It won't work, they're going to beeper ,” Mercier told him. And Michel Courtemanche did it all the same, imitating the noises to hide the swear words he had about the “Gros cave”.

We attended a another moment at the Courtemanche, when introducing the French humorist Kev Adams, whom he presented as his son, he made the sound of a cassette rewinding to resume.

Richardson Zéphyr offered a very nice number around the solidity of the Laporte bridge and the third link, tampering with the success of Boule Noire with the words ” Do you like Lévis like me? “.

Richardson Zéphyr had some solutions for the Laporte bridge and the third link.

Kev Adams earned a standing ovation during his appearance on stage. The French actor and humorist did not miss his shot. One of the good moments of this successful, balanced and very entertaining evening.

“ In Quebec, you have to drive 12 hours to get to Gaspésie. In France, we find ourselves in Turkey,” he said.

He told a story of helplessness experienced during his visit to Quebec in 2019, baptizing his sex with the name of Justin.

“You made us want to do this job and you made us all want to take drugs,” he said to Michel Courtemanche.

The magician French Éric Antoine, who discovered Courtemanche at the age of 14, even allowed himself to make a ” colle ” to the moderator. We realized, at that moment, the impact of the Quebec comedian.

We were treated to a great number on the conspiratorial truckers with Dominic Paquet as Keven, whom he personifies to perfection on the radio show See you next week, with Jean-Claude Gélinas wearing a belt of beer cans and Michel Courtemanche. A hilarious number.

Saturday evening, at the Capitole, it will be Anthony Kavanagh's turn to host with Michel Courtemanche, Anne Roumanoff, Alain Choquette, Pierre Brassard and Reda Saoui as guests.