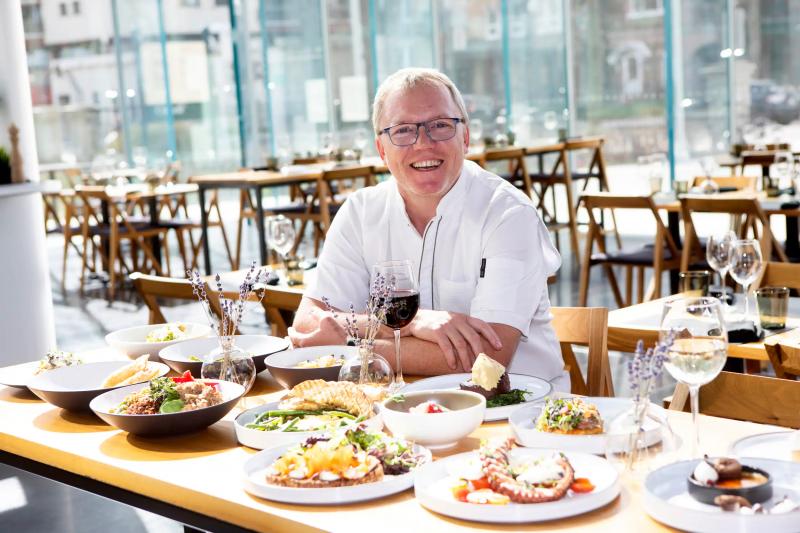 After an exhibition at the Musée national des beaux-arts du Québec (MNBAQ), nothing better than a meal at its new restaurant to prolong the experience, and go from contemplation to tasting. Art and gastronomy come together on the plate at Café Quebecor, thanks to a menu by Laurent Godbout.

Inaugurated last May, the Café Quebecor at the MNBAQ offered all summer a menu inspired by the main exhibition of the moment, America. Between dreams and realities, where you could admire iconic works by Andy Warhol, Willem de Kooning, Jackson Pollock, Claes Oldenburg, among other major artists of American art.

This is not the first time that a chef has been inspired by the theme of an exhibition to create his dishes, a concept already seen, among others, at the Museum of modern art (MOMA) in New York, at the Musée Jacquemart -André de Paris, as well as at the Montreal Museum of Fine Arts (MMFA), where Laurent Godbout, precisely, had done the exercise for the first time.

In the pulled lamb burger and the grilled octopus, there are nods to the works Phoenix (marked man) by Vaughn Spann, and Tiger 1949 by Jackson Pollock.

“I find it very fun to be inspired like that, to create a link between the exhibition and the restaurant. It gives the impression of surpassing oneself, of going further than what one usually does,” said Laurent Godbout, whose culinary career has taken him from chef to restaurant owner, speaker and author.

Colours, shapes, textures, and even cultural references were found in many of the dishes on its summer menu, reflecting the America exhibit. Between dreams and realities, a beautiful reflection on Americanness in all its contradictions, from the struggles for social equality to excessive consumerism.

Phoenix (marked man), by Vaughn Spann, as part of of the America exhibition. Between dreams and realities.

On the terrace or under the huge glass roof of the Pierre Lassonde Pavilion, you could enjoy an originalegg roll with smoked meat, illustrating the American cultural mix and its Jewish and Asian immigration, whose exhibition allowed us to discover the influence on American art. The grilled octopus dish, streaked with sauce, perfectly evoked the dripping pictorial technique typical of the artist Jackson Pollock, whose work was on display.

Tiger 1949, by Jackson Pollock, as part of the America exhibition. Between dreams and realities.

Even the anti-racist and anti-sexist message conveyed by the exhibition was on the plate. “As America demonstrates, we are in a cosmopolitan world, where racism no longer has any place. The message is clear in my egg roll. You can mix ingredients from different sources and it can give something interesting,” said Laurent Godbout.

America. Between Dreams and Realities ended on September 11 at the Musée national des beaux-arts du Québec. Laurent Godbout is now preparing the menu inspired by the next exhibition, Evergon, intimate theaters. “It will be a more autumnal menu. I also go seasonally. Since there are a lot of tourists who come to visit the museum, I also find it a great opportunity to introduce them to local products. »