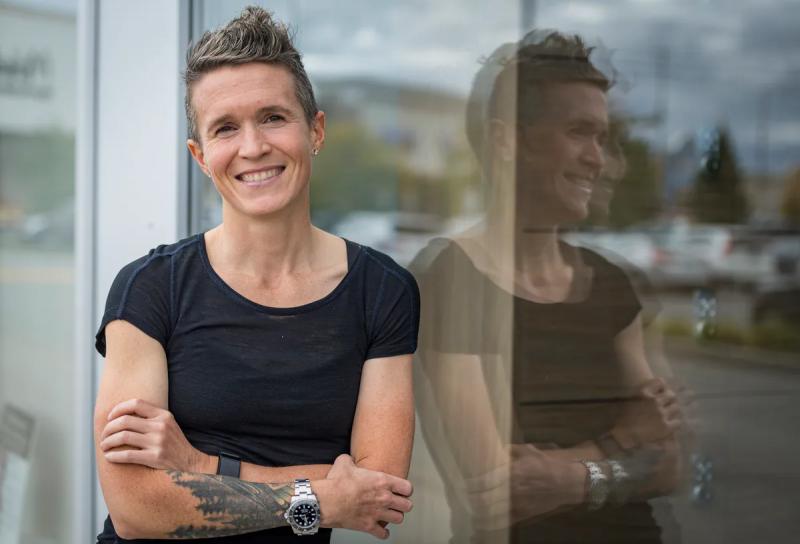 Former champion Geneviève Jeanson appeared smiling and radiant on Wednesday in Vaudreuil-Dorion, where a press conference officially integrated the cyclist as spokesperson for the Sport'Aide organization.< /strong>

“This is the most relaxed press conference I've had in my life,” she exclaimed from the start, laughing heartily.< /p>

The atmosphere obviously clashed with the time when, in 2005, she was taken for doping despite her persistence in saying: “I have never touched EPO in my life”.

“I still have, in my story, the chance to have come out of it in a piece and healthy,” noted Jeanson, Wednesday, who after confessing to doping, more recently lifted the veil on physical abuse and sex committed by his ex-trainer André Aubut.

A lump in the stomach

Today, at 41, Jeanson no longer wants to remain silent, she feels ready to commit. She wants, with Sport'Aide, to promote a healthy and safe sporting environment.

“I still feel very exposed and I still have a lump in my stomach when we revisit my story,” he says. -she. And maybe that will never change, but at least I feel that I am able to contribute to awareness and prevention.”

“It's by giving a little of ourselves and trying to help others that we end up receiving a lot,” added Jeanson. Connecting with people is going to help me, I'm 100% certain.”

While the former champion's goal is first and foremost to help young people to avoid certain pitfalls in which it has found itself in the past, Jeanson could indeed take the opportunity to complete its own reconstruction.

“It’s resurgence, redemption, for his part described Sylvain Croteau, general manager of Sport’Aide. This involvement will help him continue to rebuild, but there is a thin line there; she does not do it for that, nor to restore her image. As she does it for the right reasons, it is sure that it will be contributory. The bottom line is that she wants to make a difference and be part of the solution to change things.”

Thanks to her experience and background, Jeanson could hardly be better placed to accomplish her new mission. If she mentions being still in one piece, it's because the former champion has managed to make peace with her past, as much as possible.

“For at least two years, I was so unhappy in my life that I was trying to find a way out of the sport, she testified, recalling the last years of her career, between 2002 and 2005. I I didn't want to die, but maybe I wanted, without crippling for the rest of my life, to have an accident and be injured enough that I wouldn't be able to run errands. I was there.”

“To my full potential”

And today, what does Geneviève Jeanson want for her own future?

“I wish myself to live to my full potential, to remain authentic, but to be able to push myself to the maximum of my abilities,” she replied.

It is also to be hoped for may this lump in the stomach still fade quietly so that its inspiration will be, in the future, less and less imperfect.

At the time of the press conference, held at the training center where Geneviève Jeanson has been working for four years now, her husband Paul Hillier was keeping an attentive ear from the reception counter.

“To see that, today, it is a lot of emotion, he recognized. It's a long spinning wheel.”

Hillier, who has been in a relationship with the former cyclist for six years now, knows very well the stages that Jeanson had to go through before becoming a spokesperson for the organization Sport’Aide. In particular, he was there to support her when, last April, she testified about the sexual abuse suffered by her former trainer during a webinar from the International Doping Control Agency.

“I never thought I would talk about that, the abuse, Jeanson said in an interview on Wednesday. For me, having people recognize me as a girl who had taken doping products was not as bad as being recognized as a girl who had experienced sexual abuse.”

“For sure that Paul was an important element so that I could talk about the real abuse, she acknowledged. He gave me the confidence to do it.”

Paul Hillier, who is in fact the owner of the Orangetheory Fitness center, also encouraged the former cyclist to write an open letter, in 2020, where she blamed a too lenient sanction against a recognized team manager guilty of multiple abuses. It contributed to deploying this desire to help others.

“More than anything, I feel in her a great desire to participate, summed up her spouse. She wants to take something very bad and come out positive. This partnership (with Sport'Aide) gives him a vehicle that will allow him to do something tangible. It's been nice the last few years where the public got to know her story a little better, but now she needed to take the next step and help.”

“She has an innate sense of productivity, she wants results, advancement, added Hillier, with a lot of admiration. Her nickname at home is Generator because she always wants to move forward, both physically and intellectually. He's not someone who likes to be passive.”

In addition to his involvement, Jeanson has regained a taste for bike rides, having also participated, last weekend, in an event organized by his former rival Lyne Bessette in the Eastern Townships, “the 100 to B7”.

“When we met, six years ago, the bike was very, very far from her, said Paul Hillier, question of situating the path traveled in recent years. She had a bike, but it stayed in her room and there was a good layer of dust on it.”

After living in the United States for a few years, it was when she returned to Montreal, in 2012, that his greatest therapy was undertaken with a psychologist.

“I wanted to be able to have real relationships with people, summarized Jeanson. I wanted to be able, if I had to have children for example, not to give them all the shit I was carrying. I couldn't live with that anymore, it wasn't fair to the others.”

On the first line

In appointing Geneviève Jeanson co-spokesperson, the Sport'Aide organization has added an important element to what could be called its first line.

Already, Paralympian Cindy Ouellet (wheelchair basketball and para-Nordic skiing) and Antony Auclair (football) were involved in preventing and countering violence in sports. The appointment will no doubt serve to pursue this great mission.

“I expected it to be strong, but maybe not like that, admitted the general manager of Sport'Aide, Sylvain Croteau , alluding to the media coverage related to the appointment of the former cyclist. Geneviève, for her part, underestimated that. She hadn't expected this tsunami. But after 15 years of absence and with what has been revealed in the last few months [Editor's note: the abuse of which she was the victim], people have better understood her story.”

From her first week As spokesperson, Geneviève Jeanson is at the heart of the awareness-raising activities broadcast these days on the Sport'Aide platforms. Educational capsules, infographics, podcast, a “letter to little Geneviève”, and even a comic strip.