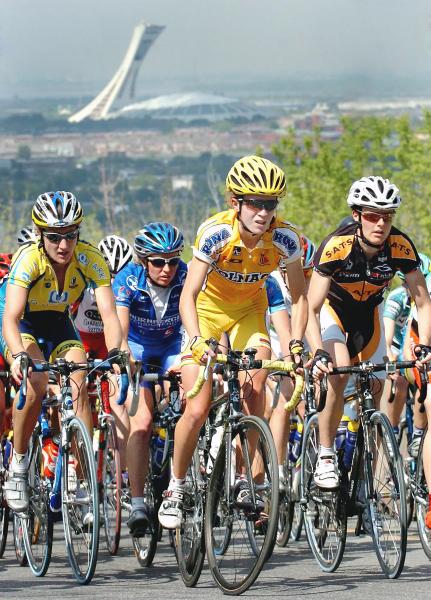 Geneviève Jeanson takes another step to help young people practice their sport in a healthy and safe way.

Suspended for life by the American Cycling Association after being failed an anti-doping test in July 2005, the former cyclist wrote a letter to the International Cycling Union in 2020 to denounce a sanction which she did not consider severe enough awarded to the manager of a Belgian team which had committed numerous abuse.

In collaboration with Sport'Aide, Jeanson takes another step and becomes spokesperson for the organization whose mission is to implement initiatives promoting a healthy and safe sports environment.&nbsp ;

She shares her story through a podcast that will be unveiled today in Montreal. A comic strip will follow on Friday.

“I am happy times 1000, illustrates the general manager of Sport’Aide, Sylvain Croteau, delighted to be able to count on the former athlete. Geneviève represents a strong image with her background and her experience. It's unfortunate, but it ticks all the boxes. »

“She has been the victim of physical, sexual and psychological abuse during her career in addition to experiencing intimidation and exclusion, to continue Croteau. Her coach isolated her and her teammates didn't want her anymore. Geneviève is a strong character to carry the message of healthy sport. Sports practice can be positive. »

He hopes that Jeanson's commitment will make it possible to sensitize young people who are going through a similar situation to ask for help.

“We now understand that she made bad choices, but you don't have everything it takes to make the right decisions at such a young age,” he says. It’s easy to be influenced and have a negative sport experience. »

Since 2008, after reading the Jeanson Affair by journalist Alain Gravel, Croteaux wanted to meet her.

“My wife gave birth on the night of December 17 to 18 and I had time to read the book since the labor was long,” he says. I told myself that it didn't make sense what she had been through and that I wanted to meet her. »

Croteau did not want to rush anything.

Thanks to Louis Barbeau

“After talking at length with Geneviève, Louis contacted me to tell me that the moment would be good for a meeting. During our meeting, I was convinced after five minutes that Geneviève wanted to get involved for the right reasons and not to improve her image. She wants to give back to young people and contribute to change. She is happy, she is rebuilding herself even if it is not finished and it is a daily job. It's impressive. »

The recording of the podcast took place in June.

“She was generous and showed great confidence,” says Croteau. We want the collaboration to continue, but I want to go at its own pace. There is a lot of interest. With everything she's been through, she deserves a lift. »

With an open heart in a touching letter

Geneviève Jeanson at the Women's Tour of Greater Montreal, in 2005.

The former cyclist shares her story through a letter she sends to little Geneviève published on the Sport'Aide website.

The 41-year-old recounts all the fun she had in pedaling when she got her start and when the carpet began to slip from under her feet when she had great success and ultimately everything tipped over.

“I loved riding my bike so much that, quietly, I turned to competitions where I quickly confirmed a certain talent. In short, the way was opening up for me… with all the dreams that success can hold out to me. »

The desire to win at all costs contributed to his descent into hell.

“If you are not careful, you could even come to favor performance at all costs and impose yourself certain things simply because you have been convinced that this is what you should do. Trust yourself and make your own choices. Believe in yourself and question yourself. »

Pleasure is the basis of everything.

« It is important that you respect yourself and that you feel good. All the time ! If you have a lump in your stomach, a heavy heart or a confused mind, it's not normal. Believe me Geneviève, none of this is normal. I can tell you about it, because I have unfortunately experienced it. That and that damn obsession with winning.

“You will be told that I made bad choices, to prosecute Jeanson. Yes, that's true, but what other solution did I have? I was alone. I was afraid that no one would believe me and I was also afraid of losing everything. I was so scared of everything that I even came to wish myself a bicycle accident. »