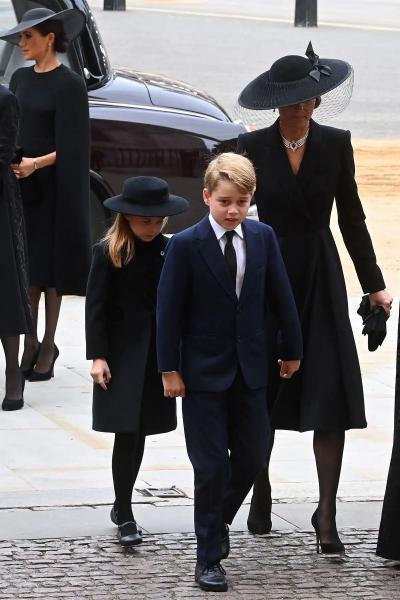 LONDON | Solemn and focused, the future King George, nine, and his sister Charlotte, seven, accompanied the coffin of their great-grandmother Elizabeth II on Monday as it entered and then left Westminster Abbey, where are holding his funeral.

Arrived by car with their mother, Kate, and the Queen consort, Camilla, George and Charlotte, respectively second and third in line to the throne, joined the procession up the central aisle of the abbey behind the remains of the sovereign.

Flimsy figures surrounded by adults in the huge nave, George, dark suit and black tie, and Charlotte, black hat and coat, are flanked by their parents William and Kate, the new Prince of Wales.

George presses his lips together as the slow walk down the aisle begins, while his sister hands clasped, visibly impressed.

In front of them walk King Charles III, their grandfather, follow i of his brothers and sister. Behind them, their uncle Harry and his wife Meghan.

Seated then wisely in the first row, not far from the coffin of the one they called “Gan Gan”, both participate timidly to the chants and look attentively at the mass booklet. Charlotte whispers a few words to her mother.

Their younger brother Louis, whose hilarious faces almost stole the show from the Queen during her Platinum Jubilee in June, is as to him absent, probably considered too young for the event, at only four years old.