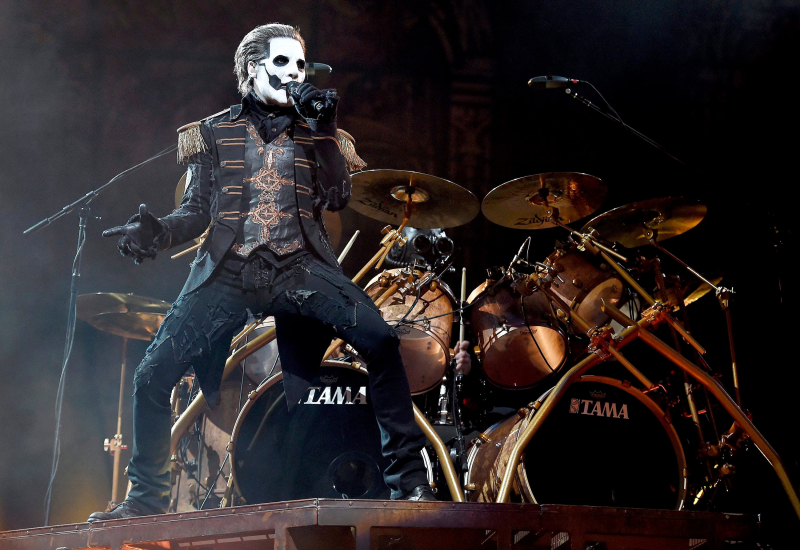 The Videotron Center was transformed into a kind of cathedral under the influence of satanic forces, Thursday evening, during the passage of the singular Swedish formation Ghost.

It was the second time in five years that the group led by the eccentric Tobias Forge, who sings on this tour under the identity of Papa Emeritus IV (there have been Papa Emeritus I-II-III and Cardinal Copia before ), passed through the Videotron Center, but the first as a headliner.

In 2017, Scandinavian rockers paved the way for Iron Maiden.

Although his popularity was built outside the commercial channels and without the support of the mass media, Ghost rallied several thousand admirers upon his return to the capital, in a reduced configuration amphitheater.

It was worth the trip. We were treated to entertaining rock-metal theatre, served by a group that made its reputation for its ambitious scenography, full of religious references, and the anonymity of its seven musicians, all masked and forming an ensemble called the Nameless Ghouls.

Even before they entered the stage, Ghost announced its colors by playing religious songs while a white curtain covered the stage.

Once the curtain fell, the members of the group appeared on a vast stage equipped with five platforms and a structure made up of several arches, all overhung by stained glass reminiscent of the walls of a church.

From the second song, Rats, the connection was made, with viewers having a blast singing the chorus with Tobias Forge.

In the first portion
of the concert, Ghost mostly drew on his album Impera, released earlier this year, and Prequelle, from 2018.

The band also wanted to highlight their return home, first with short greetings in French from Forge and also with a few notes from All By Myself , swayed by one of the guitarists.

At the time of writing these lines, we were halfway through a performance focused on the many variations of heavy metal and hard rock in their repertoire.< /p>

Ghost will be at Place Bell in Laval tonight.

On their last visit to Quebec in 2012, the members of Mastodon had been forced to retire after seven songs due to a violent storm during the closing night of the Festival d'été.

Ten years later, we were treated to a thunderous performance, opening for Ghost, by the Atlanta band.

Brutal, deafening, infernal or any other synonym describes this dizzying lesson in sludge metal that tested the resistance of our eardrums. “Tab…, man, it's monsters,” exclaimed a fan when silence returned after an hour.

Mostly the songs from the recent album Hushed and Grim were brought to the fore, but long-time Mastodon fans also got to bang out some classics, including the epic The Czar and the instrumental Bladecatcher.

Spiritbox: the voice of Courtney

Founded in 2016, metal band Spiritbox, from Victoria, Colombia -british, is still very young and that explains her presence at the opening of the evening, Thursday.

If what we have seen, and especially heard, is a guarantee of the future, she could soon graduate in another time slot.

Their compositions have punch and their stage presence is dynamic.

Spiritbox's main attraction, however, is singer Courtney LaPlante, who can alternate between a clear voice and fierce throat singing with an aisa disconcerting nce.