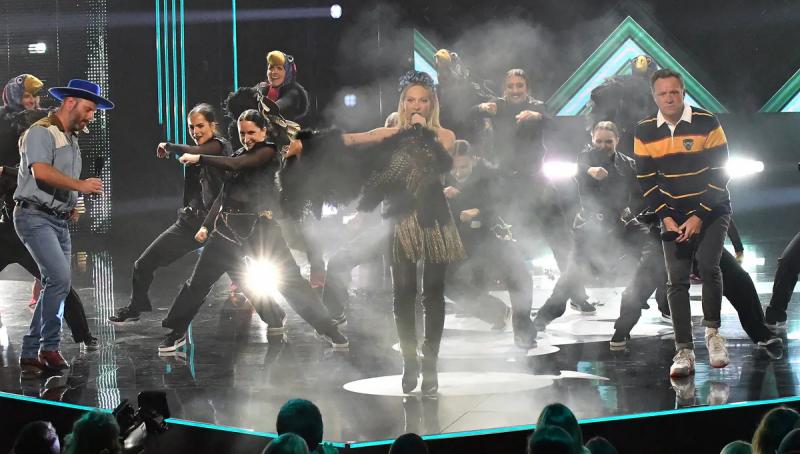 Singer and host Marie-Mai was at the helm of her first comedy gala at the ComediHa! at the Capitole de Québec, yesterday. Songs, special guests, big names and glamor were on hand for this evening of variety.

The gala opened with a song with Marie-Mai accompanied by dancers from the DM troupe Nation de Lévis, recently crowned world hip-hop dance champion, and the success of pop star: C.O.B.R.A.This number was however interrupted by Claude Cobra, the singer of Bleu Jeans Bleu, who believed he had been called by the star.

He then suggested that Marie-Mai replace C.O.B.R.A. by D.I.N.D.E. in honor of an old viral report in which a lady received an impromptu visit from a turkey in her home! Stéphane Fallu was also invited on stage for this burst number, but whose humor fell a bit flat despite the elaborate staging.

Marie-Mai, a true multidisciplinary artist with very glamorous looks, did a good job hosting this gala, which was intended to be a great variety show.

P-A Méthot and Stéphane Poirier each presented numbers that left plenty of room for the clash of generations. Méthot notably recounted a hilarious day at the Granby zoo as a family with his 11-year-old daughter. Poirier echoed the #MeToo movement with arrows fired at Philippe Bond and Julien Lacroix.

Christian-Marc Gendron was given a standing ovation by many spectators after his very nice imitation number. Those of Garou and Pierre Lapointe were particularly successful. Comedian Michel Charette, meanwhile, ventured into a little more saucy territory by insisting on the importance of following his inner voice.

While the participation of Méthot, Charette and Gendron had been announced in advance, several surprise guests came to spice up the evening.

Daniel Lemire was one of them. We paid tribute to his 40-year career with Denis Bouchard and Gildor Roy. Lemire then showed up on the boards in the shoes of his famous Uncle Georges. The latter was warmly applauded.

Marie-Mai, who is also the host of the show Big Brother Celebrities, reunited with the winner of the very first season of this reality show, Jean-Thomas Jobin, for a hilarious number dedicated to the Auto-Tune software, widely used in pop and hip-hop music.

Among the other guests, Jean-François Provençal and Julien Corriveau delivered two totally crazy and funny songs. Comedian and host Yves Corbeil also participated in a sketch, while Pascal Cameron presented two numbers in which he compared comedians and personalities to animals.

The gala ended with music Éléonore Lagacé, Louise-Audrey Beauséjour, Tranna Wintour, Marie-Mai, Wilfred Lebouthillier, Maxime Landry as well as a choir for a final in song.

Michel Charette's gala will be presented tonight at 7 p.m. 45 at the Capitol Theater. Stéphane Fallu, Sylvain Larocque, Simon Delisle as well as Dominic and Martin will be among the guests.

► Michel Charette's gala will be presented tonight at 7:45 p.m. at the Théâtre Capitole. Stéphane Fallu, Sylvain Larocque, Simon Delisle as well as Dominic and Martin will be among the guests.