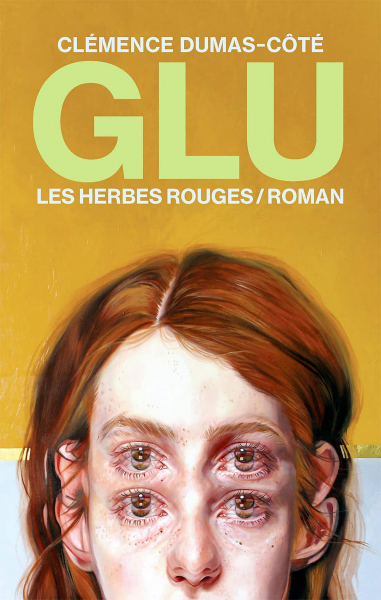 A woman is fascinated by the lethal jump of a neighborhood youth. Is this the ultimate power when one is in search of the absolute?

You go through Glu feeling like you have a novel in your hands to handle with delicacy. Like a pomegranate actually. But is it the weapon that brings death or the fruit in the colors of life?

Clémence Dumas-Côté keeps us on this fine line until the last sentence of her story. It must be said that the theme she explores is disturbing in itself.

Simon, a neighbor of the narrator, jumped from the roof of the building where a party was taking place. Could she do the same? His life is slipping away from him so much, why not go all the way, escape completely?is macabre; on the contrary, it is woven from the imperceptible fibers that connect us to the world. Although this is Dumas-Côté's first novel, she has previously authored two collections of poetry: she therefore knows how to say the unspeakable.

The unspeakable is when the narrator comes out of her mother's skin: her two-year-old daughter then finds herself playing with the sharpened shards of broken glass or being left unattended in her bath. The mom is not well, but who watches over her?

The unspeakable is also knowing how to capture the essence of Parc-Extension, a modest, multicultural Montreal neighborhood where its narrator lives. Over there “the clutter reigns”, a beautiful reflection of what agitates this one.

Fortunately there are Greek pastries , the discreet flirtation with strangers in the metro, the messages she leaves in bus shelters – so many ways to soar above the bleak contingencies of everyday life.

“I believe in magic,” says the narrator. And again: “I seek to immerse myself in the traces of time, of things”, a demanding quest that dates back to childhood.

But who can understand? People are so down to earth and she's so… out there. A scene from the time when the narrator was still in a relationship illustrates this well. The little family is then camping, in front of a campfire. Inspired by the flames that come and go, the narrator launches to her lover: “You, there, darling, what are the things you want to transform in your life?” He doesn't really know, she insists: there must be something too much “in you” or something that you want to change? He finally finds: “Being more athletic”. She is flabbergasted: isn't he asking more questions… “Well that's it, I wonder if I could not add moments of physical activity to my week. »

Dialogue of an inevitable separation, which invites to push further the questioning on what holds together all the pieces of oneself.

So what did he think, that Simon who jumped? His friend Theodore will provide the missing link. And finally scoring.