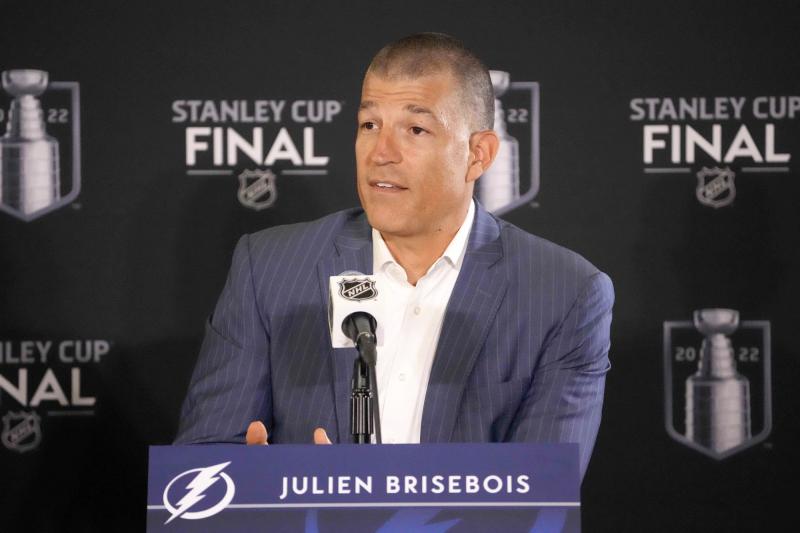 TAMPA | Conn Smythe, Jack Adams, Frank Selke. Managing directors who marked their era so much that today they have a trophy in their name.

Julien BriseBois still has crusts to eat before he can claim posterity. Nevertheless, in taking his team to the final for a third straight season, the architect of the Tampa Bay Lightning has joined a select club with only nine members in the entire history of the NHL.

In addition to the Quebecer and the trio mentioned above, this small group includes the names of the illustrious Punch Imlach and Sam Pollock as well as those of Keith Allen, Al Arbor and Glen Sather. As a hand-picked club, we've seen worse.

At the head of the first great dynasty in NHL history, Conn Smythe served for 27 years. Under his watch, the Leafs won seven Stanley Cups and reached the Finals on six other occasions. Moreover, it is to him that the Leafs owe their name. Upon his arrival as owner and GM, the team was called the St. Patricks. He is also the man to whom Torontonians owe the construction of Maple Leafs Garden.

He worked for 35 years in the Red Wings organization. One of the first to occupy the roles of head coach and general manager, he led the Wings to three crowns before choosing, in 1947, to concentrate on the role of GM. Nicknamed “Traders Jack” due to his many transactions, he was the instigator of the subsidiary system that allowed Detroit to reach the final seven times in nine years from 1948 to 1956.

He was the instigator of the impressive system of subsidiaries which allowed the Canadiens to have control and the first right of inspection over practically all hockey players in Quebec. This way of doing things allowed him to align the greatest dynasty in the history of hockey. From 1951 to 1960, the Canadiens appeared in every Stanley Cup final, winning the trophy in 1953 and from 1956 to 1960.

Recognized for its fiery character and its boorish methods, he was both general manager and head coach the last four times the Maple Leafs won the Stanley Cup: from 1962 to 1964 and in 1967. A few questionable transactions on his part undoubtedly deprived the Torontonians of even more success.

If Selke was behind the subsidiary system, Pollock was the mastermind behind some of the most ingenious deals in history. It was in this way that he laid the bass of the team that would fly over the NHL from 1976 to 1979. However, it was Irving Grundman who was in charge in 1979.

First head coach and second general manager of the Philadelphia Flyers, Allen is the one who set up the “Broad Street Bullies”, the most terrifying formation in the history of the circuit, the one who ruled until until the Canadiens end the carnage in the 1976 final.

The first employee in Islanders history, the man in the bow tie chose to think long term by adopting from the start a strategy aimed at building his team through the draft. The Denis Potvin, Clark Gillies, Bryan Trottier and Mike Bossy were the heart of this club, which won 19 consecutive series from 1980 to 1983. Last team to win four Stanley Cups in a row, New York would have tied the mark of five consecutive titles for the Canadiens, had it not been for the intervention of the young Edmonton Oilers.

He was the one who advised Peter Pocklington to do everything possible to acquire Wayne Gretzky at the time of the World Hockey Association. Then, he laid the foundations of the powerful team by selecting Paul Coffey, Jari Kurri, Andy Moog, Grant Fuhr and Steve Smith. Besides, we'll never know for sure, but had it not been for the goal Smith scored in his net in Game 7 of the 1986 Smythe Division Finals eliminating the Oilers, they might have reached the final five times in a row and six times in nine years.