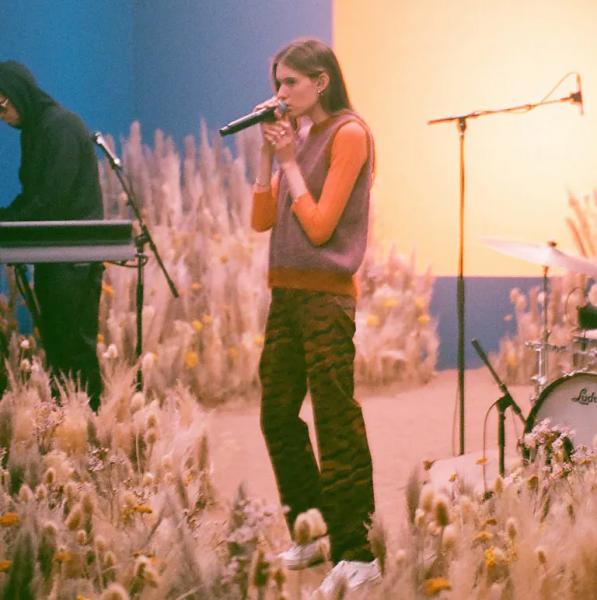 The showbiz world has always aroused fascination. However, it is not as glamorous as one might think. By only observing this world on the surface, we sometimes minimize the work and the rigor that we find there. Each in their own way, as did the hits 30 Rock or Entourage >, these series and documentaries lift the veil behind the scenes.

Mira is an American star who subscribes to popular American movies. To escape the breakup of an unhealthy relationship and find meaning in her career, she agrees to play Irma Vep in a French miniseries adapted from the silent film Les vampires. The director is a temperamental and borderline being. The international cast brings together funny characters. Acclimatizing perfectly well in this universe far from the big Hollywood machine, Mira finds a disturbing comfort in the one she embodies and who inhabits her more and more. Without complicating matters, we can say that Irma Vep is the adaptation of an adaptation. For the record, director Olivier Assayas filmed an adaptation of Louis Feuillade's 1915 film in 1996. Here, it's Alicia Vilkander who endorses Mira/Irma in a version that seems well steeped in this first adventure. If Vilkander is magnetic, we fall for Vincent Macaigne as a passive aggressive director and Vincent Lacoste in the skin of a mistreated young first. If the story of the series is so entertaining, it is because it follows the vagaries of a team in the middle of filming a series that is close to disaster. We sympathize with the assistant-director who tries to hold the fort. And we like backstage contests, courtship, unhealthy competition and sources of funding whose interests are not just artistic.

Funny is the name of the Parisian Comedy Club where young comedians who struggle to live off their jokes perform. There's Bling, whose consumer issues burned promising success. There is Aïssatou who had abandoned the stand-upto become a mother and who is trying to be reborn on stage. There is Nezir, who lives in a difficult financial situation with his father. He has an innate talent for writing and a contagious optimism in addition to being endowed with an unwavering solidarity. Then, there is Apolline, whom nothing intended for humor, but who hopes to free herself from her mother to live her passion. Four characters. Four new faces that perfectly represent Parisian diversity. Four characters who illustrate the complexity of finding one's place in the world of humor: writing in the shadows, the attraction of the viral, the work-family balance, the pressure of the environment, the perception of humor in their culture. Humor is work, precision, and this fiction, while arousing attachment to its characters, shows the path that young comedians must travel to stand out and aspire to big rooms.

< p>This is not the first time that I mention this great series whose season 2 appeared a few weeks ago. We scrutinize the cogs of the stand-upthrough the toxic, but very entertaining relationship between a star, Deborah Vance, on the decline, and a young kamikaze author, Ava, who seeks to restore a career start that started on a bad joke. If they tamed each other professionally in the first season, the second is going to keep them on a fine line between friendship, respect, and their respective needs. After rolling her jokes across the states in her luxury RV, Deborah is doing everything to regain the prestige of a venue in Las Vegas and her face on the Strip.

The fashion and modeling industry has always aroused curiosity. This documentary series opens the doors to the Humankind agency, which tries to do things differently, far from the standards that have always been popular. Marikym Hervieux is a former model. She founded with her ex-agent, Claudine De Repentigny, an agency more focused on diversity. They manage talent there with benevolence, which contrasts with the twisted and devastating stories too often told in the industry. We follow them as they try to conquer the American market with three of their models: Megan, Shilloh and Max. In the challenges and despite the pitfalls. With the small victories too. A human incursion as we rarely see in an environment that nevertheless sells dreams.

Jennifer Lopez is a megastar. This documentary shows her as she has just been offered the Superbowl halftime show with Shakira. We follow her in her life and in the preparation for this major event, which she sees as an opportunity for Latin American women to put their culture, their talent and their strength forward. The star suffered from a light-hearted image portrayed in the tabloids. She wants to show that she has content. empowerment. Without makeup, we follow her during a family meal, or when she hugs a troupe of young dancers, encouraging them to believe in their dream. We are witnesses of the loving mother, the uncompromising dancer—, the actress with a message that she wants to be. Fascinating access that feels authentic.

The British version of the French series Dix pour cent (Appelez mon agent) just landed. We find more or less the same plots: actress who is too old for a role, pay equity within a couple of actors, actor who does not come out of the skin of a character… but with English stars. Helena Bonham Carter, Emma Corrin, Phoebe Dynevor, David Harewood appear in their “own role”. It's just as tasty. Same, but so different at the same time. We are in London, we feel that interpersonal relationships are a little different. Some situations are brought on more subtly or are less exuberant. Here, Mathias becomes Jonathan. This is the son of the founder of the artist agency. His attachment to the company is different. His assistant is also in love with him. Andrea is Rebecca, less virulent. She shows more emotional vulnerability for a war journalist she falls in love with. His new assistant, Misha, is Jonathan's illegitimate daughter. Arlette is Stella, the agency's experience, voice of reason, wisdom and memory. The dog Marcus is there. And Gabriel is Dan, the agent who struggles to face the truth and who falls for the receptionist who has become his client. The English office sees the arrival of an American team that is too happy and too perfect to turn the company around after the death of the founder. A great clash of cultures. All scheme to make their prestigious clients happy and stay at the agency. Everyone gets their feet wet.

Authenticity is also at the heart of this documentary which follows the singer-songwriter. Charlotte Cardin has always led her career at her own pace, in her own way. It's all to his credit. This documentary retraces in a personal form her journey which leads her to the release of her highly anticipated debut album last spring. Fifteen scenes where life and the stage intersect.