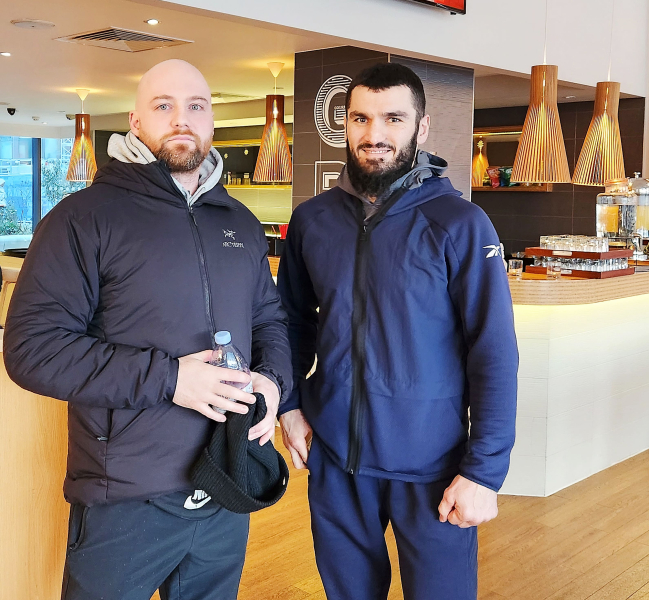 LONDON | Jean Pascal fought a fabulous battle against Carl Froch. He lost in twelve rounds. Kevin Bizier faced Kell Brook in Sheffield, he got knocked out. Lucian Bute was demolished in Nottingham by Froch. Oscar Rivas lost to Dillian Whyte in Greenwich and Marie-Ève ​​Dicaire came to lose her title in Manchester just a few months ago.

In fact, Quebec victories on British soil have been very rare. Marshall Butler, Steven Butler's grandfather, achieved the feat fifty years ago, in 1972, by defeating a future legend in boxing history, John Stracey. It was in Kensington, in the heart of London. It was one of Butler's very first fights and besides, it was Boxing Hall of Famer Stracey.

Alain Bonnamie also won a stupid fight where the adversary had bitten him in the breast and Otis Grant won a WBO world title by beating Ryan Rhodes who had a very brilliant career.

«  We had spent eight weeks in London in training camp. We had found a house where everyone lived, including the training partners. The sacrifices had been worth it,” recalls Russ Anber.

The holy Russ was Saturday night in Manchester in Liam Smith's corner who faced Chris Eubank junior. He also won in four rounds. It was in the waters of his 50th fight in England. This morning he will be in London with Artur Beterbiev.

Artur Beterbiev has already been in London for a few days. With Luc-Vincent Ouellet, the lieutenant, his lawyer Anthony Rudman, the trainer, trainer John Scully, the physiotherapist. Already, Samuel Décarie did some of the work before the arrival of the commando. We had to find a halal butcher for Beterbiev, a boxing gym nearby ready to welcome the world champion from 9:00 to 11:30 in the evening. Question that Arthur's body adapts to the hour of combat.

And Marc Ramsay, the general of the small army, arrives this morning in London for the final preparations.

“It's not just England, it's a fight on the road that takes a lot of preparation. England is just more complicated by the quality of British boxers. Boxing is immensely popular, it makes money and many athletes choose boxing. It gives a very high level,” explains Ramsay.

It’s simple. Combat is war. “And like in war, you have to assess your forces, the forces of the enemy, have all the information available, prepare the logistics and know the whole environment of the battle,” notes Ramsay. /p>

Thus, Vincent-Luc Ouellet has already put in place everything necessary for the comfort and convenience of this preparation. Later this week, Sam Décarie and Luc-Vincent will go to the arena to examine everything. The locker rooms, the corridors that Beterbiev will take to get to the ring, the lighting in the locker rooms and in the ring, the atmosphere. Everything that is humanly controllable is going to be under control.

But General Ramsay doesn't go to war with a peashooter. “Artur is a mature man. He has extensive experience in amateur boxing. I would say 80% of his fights and major tournaments have been overseas. including several in England. Also, since being in Montreal, Artur has been fighting on the road almost all the time. Even that we could be disoriented if he fights in Quebec,” explains Ramsay.

Artur Beterbiev is an army unto himself. Perfect. But it will happen in England in front of 20,000 spectators. We do not know the referee and I will be allowed to be a little paranoid, the august British Boxing Bureau, the BBB, has a very bad reputation in the rest of the world.

In other words, all cheaters aren't in Las Vegas casinos…

Talk to Oscar Rivas who unknowingly fought a dope in Greenwich. While the BBB knew about it.

LONDON | Russ Anber was in Manchester on Saturday night. Two locals clashed. Liam Smith and Chris Eubank Jr. Smith won and Russ was in his corner.

“It was sold-out. Two good boxers, but not world champions. But they were two Englishmen and they had been picking each other up for four or five years. The interest was sick,” Anber said the day before in Manchester.

Basically, it's Régis Lévesque's old recipe. Except that Eddie Hearn is almost a billionaire, Frank Warren is a legend and the other English promoters can count on a multitude of good boxers who earn their living admirably by fighting in London, Manchester, Liverpool, Nottingham or Sheffield. This gives premises of a very good standard.

In this batch of good boxers, a Carl Froch eventually emerges, an Anthony Joshua, a Tyson Fury, a Billy Joe Saunders, a Kell Brook or a Liam Smith.

In addition, these British are tough, seasoned and are fierce fighters.

Make no mistake, and we're going to talk about it extensively this week, Anthony Yarde stands out. For him, Artur Beterbiev is the key to fame, fame and wealth.

LONDON | And who was having a cup of tea at 8 o'clock in the morning in the coffee shopfrom the hotel to Wembley? Who seemed to be waiting for the humble columnist stunned by a six-hour flight between Dorval and Heathrow? The world champion himself, Artur Beterbiev. Alone with Bek, his Chechen friend, and Luc-Vincent Ouellet who arrived at the same time as me. Beterbiev was dressed warmly with his hoodie. Ready to go racing. And hit his regular workout at 10 a.m. Smiling, almost ready for his fight against Anthony Yarde on Saturday night, he took the time to pose for a couple of photos and stepped out with Luc-Vincent in the cool of a cold, damp morning. It was -4 at Wembley. The day before, he had “celebrated” his 38th birthday. Canelo Alvarez will therefore wait another three years before facing him.

Wembley Stadium is located in a lively area.

Wembley is a tasty suburb. In any case, the famous stadium has given birth to a lively district where all the food in the world is served. Except Quebec poutine.

When it opened for the London Olympics in 1948, it was called the Empire Stadium. Of course, the old obsolete stadium was demolished and Wembley was rebuilt in the same area.

Maurice Vachon (left) and Frank Saxon, one of his coaches, at the British Empire Games in 1950

François Lafortune tells me that Maurice Vachon (on the left in the photo) tried to win a medal there in wrestling. He failed, but was winning his gold medal two years later at the Commonwealth Games when it got awkward to brag about his empire

There is one building you should avoid at all costs in London. The famous Harrods store. Ten floors full of more expensive items than each other. But you can go there to see the Lady Di mausoleum… Or the $60,000 Montegrappa pens. And above all remember that a coffee at 8 pounds, well, that's $16 Canadian.