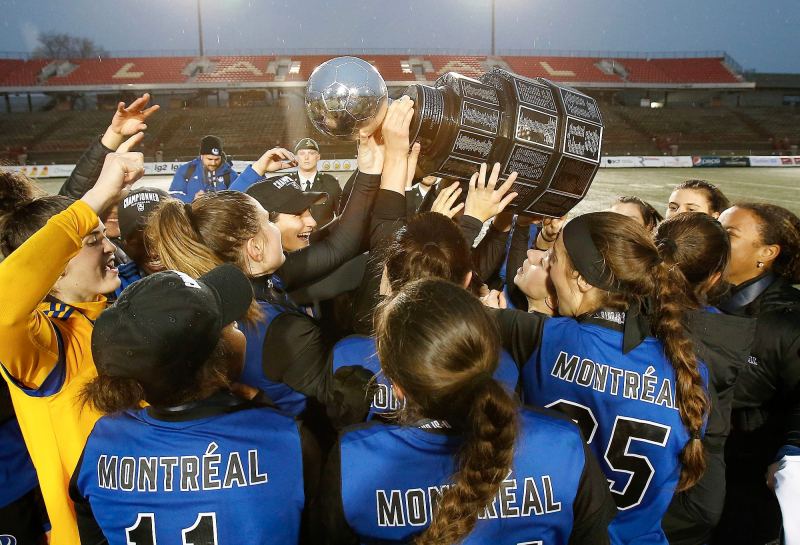 In an all-Quebec Canadian women's soccer final played Sunday at the PEPS, the Carabins defeated the Université Laval Rouge et Or by a score of 1 to 0 to win the second national title in their history .

RSEQ player par excellence, Mégane Sauvé served a skillful pass to Justine Lalande who scored the game's only goal in the 75th minute.

The Rouge et Or tried everything in the last minutes to push the game into overtime, but the Blues held on.

If the Rouge et Or won both duels in the regular season, the Carabins had the best in the provincial and Canadian finals.

“It's a great day for our program and we're very happy,” said head coach Kevin McConnell. This victory shows that we are doing things the right way because we are almost always there. After two losses in the regular season, this victory is even more salient. Credit to Laval who played a very good game, but we managed to win when it counted. The difference was in believing in our abilities and the girls believed in it all along. »

Montreal has also won the banner of Canadian champions. This is the second title in their history after that of 2017 and a sixth national medal.

In the opposing camp, David Desloges was obviously disappointed with the turn of events, but he was filled with pride in the course of his protégés.

“It's not an insignificant season that we have just known, mentioned the Laval pilot. It is the sixth medal in the history of the program, the first silver. We just had one of the best seasons and that's what I'm going to remember. »

“I am disappointed with the result and my thoughts are with our graduates, but I am proud of our course in the season and this week in the championship, to pursue Desloges. Credit to Montreal who were the best team today [Sunday]. We lived a dream scenario of trying to win a national title at home, but the magic did not work in the final, which does not take away my pride. »

Author of an assist in the final, Mégane Sauvé also scored two goals in the first two games, which earned her the title of player par excellence of the tournament.

“It ends well my career and that of several players, underlined the player par excellence of the RSEQ. This was our goal from the start and we have not deviated from it. We had a lot of obstacles. We got up each time and found solutions. We were running, we were running to our practices at 6 a.m. for that time. We wanted to be lucid and be able to put it in when the opportunity arose. »

Skilled on the deciding game, Sauvé also distributed the compliments after the match.

« For you to be successful offensively, you need players behind. Our [final MVP] goaltender made key saves and got us into the final. And our defenders are exceptional. It is not a goal to receive individual honors, but I am grateful and it feels good. »

Forward Léa-Jeanne Fortier didn't want to miss the Canadian final for anything in the world.

Injured a foot in the quarter-finals and is a reserve in the semi-finals, the country's rookie par excellence was back as a starter for the ultimate meeting.

“We don't see a Canadian final very often and I wanted to help my team,” said Fortier. My game was not affected. My injury is no excuse for not scoring. It's disappointing to lose and hard to watch the full body of work, but we had a wonderful season. »

For goalkeeper Myriam Labrecque, who was playing her last game of her career, the loss was hard to take.

“In theory, the silver medal is better than the bronze medal from last year, but there is a bitter taste. This is not the way I wanted to end my career. »

The Rouge et Or took advantage of a few chances, but failed to capitalize.

“We have had a problem for a long time taking advantage of our chances to score when we dominate and the scenario unfortunately repeated itself in the final, she said. The little spark is missing for the ball to end up in the net. The Carabins are very strong on the counter-attack and they took advantage of their chances. It's rare that I say that, but I'm very proud of the girls and the way we played. I'm going to tell them in the locker room and thank them for getting me to the final.

Kevin McConnell was full of praise for his star player Mégane Sauvé.

“It's a formidable player as you can see very quickly, but like no one else she is even more formidable. »

Sauvé was touched by the words of her coach.

« It warms the heart, she expressed. I have been around Kevin and the staff for six years and they have always had 100 per cent confidence in me and developed me greatly. Beyond what is happening on the pitch, I have grown as a person and I thank them. »

Sauvé also had a thought for the Carabins football team which lost the Dunsmore Cup on the last play of the game, Saturday, on the same field.

“We watched the game, it was heartbreaking and we wanted to end the weekend in style. »