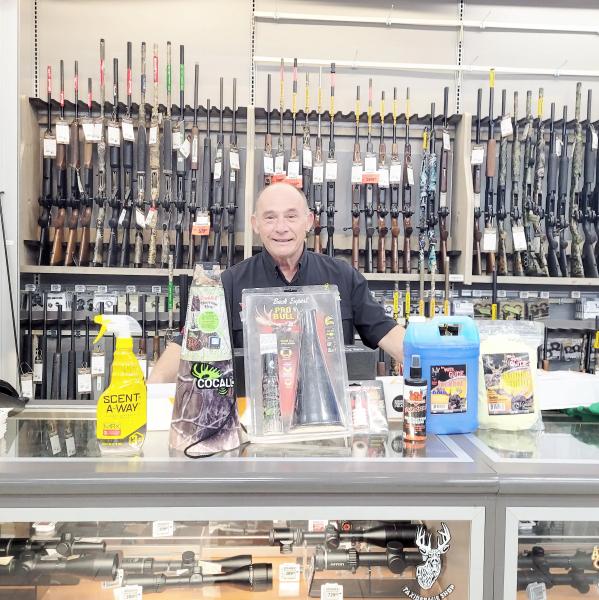 During this autumn period when we hope to outwit the moose, it is always interesting to have access to good tips.

Richard Sicard is an old trucker who has worked for several manufacturers in the hunting industry.

For the past few years, he has had fun, as he says so well, advising the customers of the Pro Shop Canadian Tire in Saint-Eustache and sharing his knowledge.

As part of the launch of his new department which has expanded by more than 250% in area, from October 13 to 16, he tells us about some effective techniques.

It's a good idea to refresh your saline before the King of the Forest harvest period.

All around the stump you put your salt on, Richard suggests spreading sulfur directly on the ground that you've scraped and bared.

Moose love this mineral for benefits it brings to digestion and healing of wounds.

In addition, being strongly olfactory and attractive, it attracts congeners over very long distances.

By taking care to put it on the ground, it sticks to the dewclaws of these large mammals which carry this smell for miles around.

During the pre-rut and post-rut period, the specialist interviewed explains that he also adds liquid syrups smelling of anise or wintergreen, which are commonly called jams. In addition to containing minerals, they are an excellent source of protein for these deer.

Mr. Sicard also makes scent lines on the ground or on pads using fresh urine from a mare in heat or a female moose to attract males to his saltworks.

Having an extraordinary sense of smell the moose can detect your olfactory presence at long range.

Use an eliminator like Nok Out or other similar products to eliminate your body odors.

You can also mask them with a spruce- or earth-scented aroma. Do not hesitate to spray your cap, because your hair retains and carries odors for quite a long time.

Be sure to hunt in good winds. A detector containing a powder, such as a little cow, can then be very useful. Be aware that Buck Expert now offers this type of product with moose or deer urine odors.

If you hunt during the rutting season, you will increase your chances if you issue a few calls to charm or challenge the king of our forests.

The call that Richard Sicard prefers is the 69 T from the firm Buck Expert. He also really appreciates the electronic call from the Cocall company. The latter, made in Gaspésie, emits beautiful dialogues emitted by the moose.

You can even add a remote control operating at 100 yards, which is very practical if you are positioned in a watchtower or on a raised platform.

When venturing into the forest, it is essential to know how to orient yourself. The new Garmin 750i GPS offers a large screen that can be paired with your cell phone with a monthly or annual subscription. You can then send text messages on which your position will appear and, if you have a problem or a more serious accident, you will be easily located.